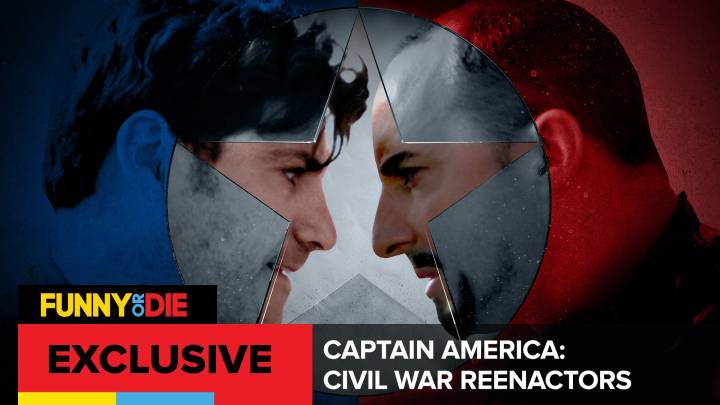 The fandom surrounding comic book movies is as intense as any fandom on the planet. Captain America: Civil War has taken Marvel’s total box office haul over $10 billion while the DC hopeful and the Marvel faithful have been going at it ever since Batman v Superman was pilloried by critics all around the world.

But all the intensity surrounding these movies might have been worth it, just so we could see Funny Or Die’s Captain America: Civil War Reenactors.

Starring Tony Hale and Adam Pally, this hysterical Funny Or Die short asks: what would happen if a group of American Civil War reenactors were really, really in to Marvel movies? You can see the answer to that question below:

Funny Or Die is better known for short, two- to three-minute-long videos, but at thirteen minutes, this Marvel spoof is one of the best videos the site has released in quite some time. Hale and Pally are pitch-perfect as underachieving pool store employees and all of the other reenactors have at least one great moment (much like the movie that the short is based on).

Honestly, I think I could have just watched Hale and Pally hit each other with pool noodles for the duration of the video. Here’s hoping we get some behind-the-scenes videos of this mockumentary before too long.