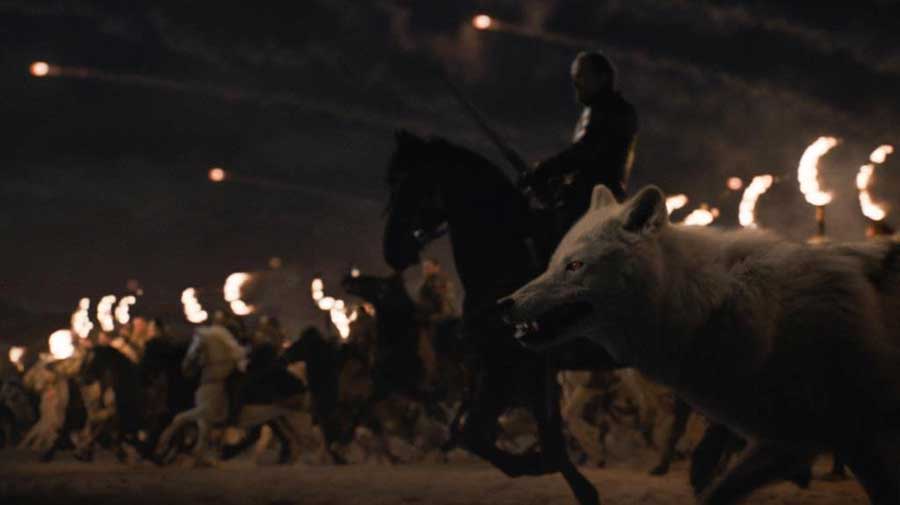 Fabian Wagner understands you were probably frantically trying to adjust your TV settings during Sunday night’s Game of Thrones episode depicting the harrowing Battle of Winterfell. He’s heard all of the criticism by now, that it looked way too dark, grainy at times, and a little hard to make sense of what you were seeing on the screen — almost like the broadcast was way too compressed. Maybe.

At any rate, Wagner insists that, no, the picture wasn’t off. “I know it wasn’t,” he defended in an interview with TMZ, “because I shot it.”

He went on in the interview to recommend that viewers watch the show at home with as many lights as possible turned off, and adjust your TV settings as needed. What the cinematography was trying to achieve, Wagner said, was to present a disorienting reaction of what a real-life battle is like. “We tried to give the viewers and fans a cool episode to watch,” he said in the interview.

So if you were struggling at times to see what was in the distance or what was happening in front of you on screen, there you have it. It was shot that way so things would look as realistic as possible, never mind how dark things ended up appearing.

From a more cynical perspective, it’s also certainly true that a low-light scenario can help disguise the presence of lots of CGI and special effects that gave us everything from dragons, giants and a zombie army in this episode. There’s also been some attempt to hold this episode up against Peter Jackson’s Lord of the Rings films, which also include lots of night fighting scenes but which used more humans even for characters like orcs — thus, the thinking goes, less of a need to hide tons of CGI, with the better-lit fight scenes in those movies much easier to watch.

Nevertheless, the defense of Sunday’s episode continues. John Bradley, who plays Samwell Tarly, told USA Today he thought the darkness “added to the chaos and disorientation of these characters, who are fighting in the dark and don’t know what’s coming next. They don’t even know which way they’re facing and if the (being) next to them is a friend or an enemy.”

Not that the darkness made any difference to the episode’s overall success, at least from a ratings perspective.

According to HBO, a little more than 12 million viewers watched the initial broadcast of The Long Night, the third episode of GoT’s eighth and final season on Sunday. That was an increase over the more than 10 million who caught the previous episode on its initial viewing, as well as the 11.8 million who saw the season 8 premiere by watching the broadcast directly from HBO.

That makes The Long Night now the second most-viewed episode in the show’s history, behind the finale of season 7 that drew 12.1 million viewers via the linear channel. The Long Night also earned the distinction of being the most tweeted-about episode of scripted TV ever, with more than 7.8 million tweets about the episode depicting the epic battle between the living and the dead.