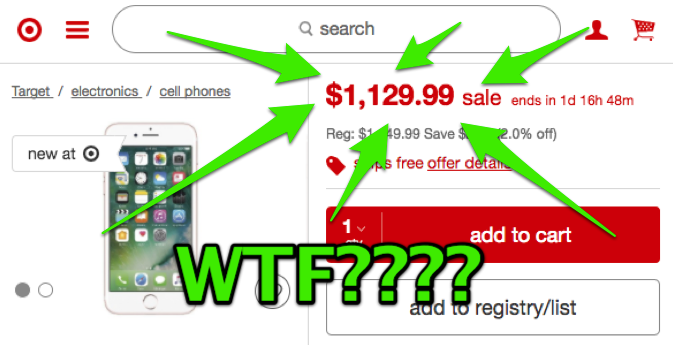 It’s Black Friday, which means deals on all manner of tempting tech toys are flooding digital storefronts. There’s a seemingly endless number of iPhone discounts out there floating around, and some deals are better than others. Target, it seems, has decided to do the complete opposite with its stock of Apple smartphones, and jacked the price through the roof while still claiming the devices are “on sale.”

MUST SEE: Apple’s Black Friday sale is awful, so here are all the best iPhone deals

If you head to Target’s online store and search for “iPhone 7,” you’ll be met with the retailers much publicized gift card promotion, which nets you a $250 store voucher with the purchase of any iPhone 7, 7 Plus, or 6 Plus. It’s a great deal, in line with similar promotions from Best Buy and Walmart, but it’s not the only thing you’ll see on the search results page.

If you scroll down to the actual individual listings for various iPhone 7 models, you’ll see prices that have no reason to exist, much less under the guise of a “sale.” What’s even more hilarious, is that it’s listed as a Black Friday sale, and its price is slated to go back up on Sunday. And this price adjustment isn’t limited to the 256GB model, as both the 32GB and 128GB versions are also priced at a ridiculous markup. What’s worse, people are apparently actually buying these phones at this jacked-up price. Target’s handy little buyers tool shows that the iPhone 7 is being bought for over $1,000. So what’s the deal here? It’s hard to tell. At first I assumed the prices were the result of some third-party seller antics — Walmart, for example, sells products in its online store that come from third-party merchants, and they can set the prices to their own liking. However, there’s nothing on the store page or individual listings to suggest these devices are being sold by anyone other than Target itself.

Maybe Target discovered the secret to Black Friday: People will buy just about anything as long as they think it’s on sale.