Tesla’s attitude toward the press has always seemed to me to be a little like the relationship that a Democratic White House expects to have with the news media. As a rule, of course, things are always a bit rough-and-tumble between the press and a Republican presidential administration. But as soon as a Democrat moves into the Oval Office? They’ve been known to bristle and completely lose their you-know-what when a journalist doesn’t take this or that pronouncement at face value. As if the officials want to scream: We’re the ones finally following the science! How dare you question us, you pain in the neck! Elon Musk’s electric car darling can be a little like that. Unless you’re a late-night variety show that’ll let him have some fun in a Mario costume, or you’re a controversial podcast host who’ll let him say whatever thought comes into his head on your show that lasts for 1,000 hours, Tesla doesn’t want anything to do with you. Which brings me to the mystery of a new Tesla dealership that may or may not be coming here, to my city of Memphis.

While Elon was garnering headlines on Monday for fake-coughing to disguise an insult aimed at Apple during Tesla’s latest earnings call, I was driving about 2 miles down the road from my apartment. To the old location of a Hyundai dealership, where I actually brought the car that I drive now.

I wanted to see this for myself.

The space is apparently becoming a Tesla dealership or store of some kind. Based on just, I don’t know, the vibe that you get while you stand in front of it: 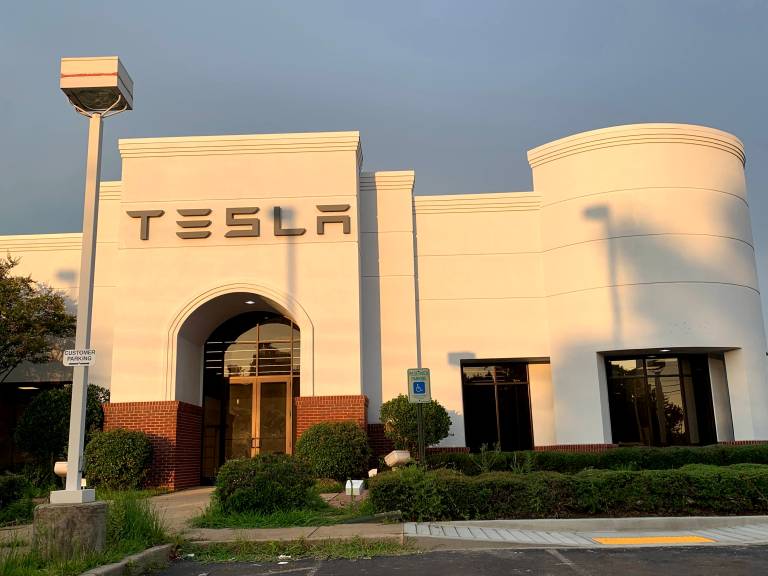 I took that photo not long after a specific moment during the question-and-answer portion of the Tesla earnings call Monday. An analyst had asked Elon about opening the Tesla Supercharger network up to third parties. “I think we want to emphasize that our goal is to support the advent of sustainable energy,” he said in response. “It is not to create a walled garden and use that to bludgeon our competitors, which is used by some companies.”

Then he faked a cough, and mumbled “Apple.” No surprise, that quickly became a story.

For the past few weeks, meanwhile, most every major media outlet here in my city has been sending inquiries in vain to Tesla’s press email address that no one ever responds to. Specifically, asking the most exceedingly innocuous question: Is Tesla doing something new here in Memphis? Is it a new Tesla dealership or store? Because it … kind of looks like it. With your sign up, and all.

I tried to get a response from the company too, by the way. No such luck.

It’s such a silly detail to try to hide, especially because local press tends to fawn over this kind of news from the company. It’s seen as more of an economic development boon kind of story. Local journalists don’t care about things like Elon tweeting out praise of China. This is the kind of thing that makes a city feel cool. Feel on the map.

Tesla currently operates a service center in an older part of town here. And, of course, we have a number of charging locations. But no store or Tesla dealership as yet (ignoring whatever this mystery thing is going to be).

As a postscript: Hopefully, the tone of this post will only reflect exasperation toward the company’s non-response here. And won’t put me on the receiving end of the secretive Tesla staffers who reportedly scour the Internet for any thing that might hurt their CEOs feelings.