Midday Sunday, T-Mobile and Sprint announced that the boards of both companies have approved a merger deal that will take the US from four wireless networks down to three. Sprint and T-Mobile are both much smaller (in terms of subscribers) than Verizon or AT&T, but merging both together will create a new company that looks much more capable of competing with the bigger carriers.

But in order for the merger to go through, it’s going to need regulatory approval from the Federal Communications Commission, and for the Department of Justice to not object on antitrust grounds. FCC signoff is widely expected — the new-look FCC under Ajit Pai has full-throatedly endorsed the telecoms industry for the last two years — but approval from the DoJ seems much less likely.

The Department of Justice under President Trump has been more concerned than usual with the effect of business transactions on consumer pricing. The DoJ has been in court recently to try and prevent the takeover of Time Warner by AT&T, a somewhat unusual antitrust case. In that instance, AT&T is pursuing vertical integration by acquiring a content owner, rather than a rival cable or telecoms company. In the case of Sprint and T-Mobile, it would be much easier for the DoJ to argue that a merger would decrease competition and drive up prices.

It’s abundantly clear from the entire angle of Sprint and T-Mobile’s press release that the companies realize how they need to make this argument. The website they created for the merger is called “All for 5G,” and the narrative that they’re pushing is that the merger is necessary for a 5G rollout to happen.

“The New T-Mobile will have the network capacity to rapidly create a nationwide 5G network with the breadth and depth needed to
enable U.S. firms and entrepreneurs to continue to lead the world in the coming 5G era, as U.S. companies did in 4G,” the press release said. “The new company will be able to light up a broad and deep 5G network faster than either company could separately.”

The release frequently plays on fears within the US government that the country is going to get outplayed on 5G by China. The release emphasizes that “it is critically important that America and American companies lead in the 5G era,” says that “Early U.S. leadership in 4G fueled a wave of American innovation and entrepreneurship,” and says that “only the combined company will have the network capacity required to quickly create a broad and deep 5G nationwide network in the critical first years of the 5G innovation cycle – the years that will determine if American firms lead or follow in the 5G digital economy.” This is MakeAmericaGreatAgainism, just with 5G rather than the steel industry. 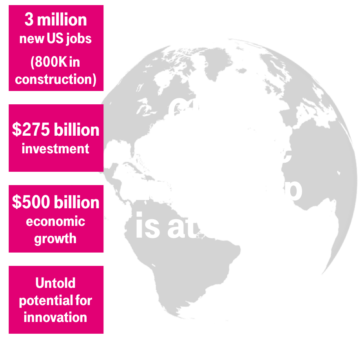 It’s pitching to a very specific audience, promising “global leadership” and a whole bunch of new jobs and economic growth. It’s exactly the kind of vague, “total potential benefit” numbers that tech companies have fed politicians in the past with great success.

New T-Mobile is promising economic growth based on the rollout of 5G, and making it sound like these things will only come to pass if the merger is allowed to happen. In fact, those numbers come from a January 2017 report conducted by Accenture Strategy, and have nothing to do with the merger of T-Mobile and Sprint.

When it comes to the specific job impact of the merger, things are a lot less optimistic. Although T-Mobile CEO John Legere told reporters that New T-Mobile will keep both T-Mobile’s current Washington headquarters and a smaller HQ in Sprint’s native Kansas City, eventual layoffs seem inevitable. T-Mobile has said it will open new rural stores and expand call centers, but there’s so much existing overlap between T-Mobile and Sprint stores that something is going to have to go. The company forecast run rate cost synergies of $6+ billion, and you don’t save that much money by hiring more workers.

It seems inevitable that T-Mobile and Sprint will have to wrestle with the Department of Justice to get this merger to go through. After reading the initial materials that the companies are putting out, it’s clear what strategy they’re going with.