Back when he and a not-yet-president Donald Trump were feuding on Twitter, T-Mobile CEO John Legere very publicly bashed the quality of Trump’s hotel in New York City. It was a Twitter spat in which both men were taking shots at each other’s businesses, with Trump carping in a tweet about the quality of T-Mobile’s service. Legere shot back with a tweet promising to immediately check out of Trump’s property and gushed: “Now I don’t have to watch tv with the 1st 9 channels being the Trump family saying how wonderful they are :)”

He followed that up with a tweet that has since been deleted, in which the CEO continued: “I am so happy to wake up in a hotel where every single item isn’t labeled ‘Trump’ and all the books and TV is about him.”

We bring that up because in the immediate aftermath of the announcement last year of T-Mobile’s intended merger with Sprint, which of course would need federal approval, a slew of top T-Mobile execs decamped to Washington, DC and booked rooms at, of all places, the Trump hotel a stone’s throw from the White House.

As reported by The Washington Post, not only did a contingent of T-Mobile executives arrive at Trump’s DC hotel the very next day after the merger announcement — with the executives including its chief strategy officer, its CFO as well as Legere himself. But by mid-June, only seven weeks after the merger, at least one executive had already made his 10th visit to the property. Legere himself had been four times.

Three years on from checking out of a different Trump property in a huff and slamming it on social media, Legere was stopped by a Post reporter last week in the lobby of Trump’s DC hotel. No, he’s not staying there to curry favor, the CEO promised. He picked the hotel “for its fine service and good security.” Per the Post: “’It’s become a place I feel very comfortable,’ Legere said. He also praised the hotel’s location, next to one of the departments that must approve the company’s merger. ‘At the moment I am in town for some meetings at the Department of Justice,’ Legere said. ‘And it’s very convenient for that.'”

The CEO certainly appears to have had a change of heart, based on his past tweets: 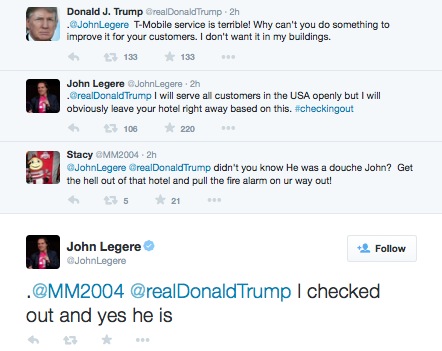 Trump’s son Eric, who is the point person for the president’s sprawling private business organization, wrote in an email by way of responding to the Post’s reporting that the DC hotel has “absolutely no role in politics.” It should also come as no surprise, he added, “that a CEO of a major corporation would want to stay with us” because of the hotel’s quality of service.

The day after the merger announcement last year, Trump’s DC hotel prepared to welcome what a list denoted as “VIP Arrivals” from T-Mobile. Legere’s name on that list was shown with an “R” after it, which let the hotel’s staff know he’s a repeat visitor. Legere has also been seen chatting at the hotel with former Trump presidential campaign manager Corey Lewandowski.

After the Post cornered him last week in the lobby, Legere apparently quickly checked out and shifted to a different DC property. His Twitter followers knew about it, because Legere started tweeting about the bar at the Four Seasons in Georgetown.