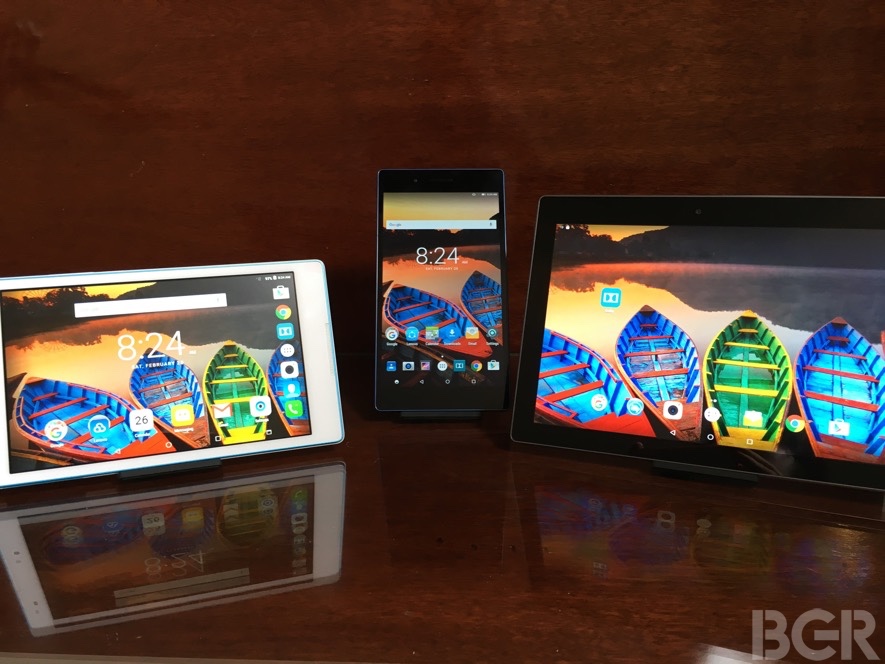 Lenovo made a splash at CES 2016, announcing several computing devices worth checking out such as tablets, quirky mobile accessories and new laptops. The company isn’t done, however, and it’s ready to make the most of MWC 2016. Lenovo might not have a “next big thing” to take on the Galaxy S7 and LG G5 today, but that doesn’t mean you should ignore the company. Its brand new products are catered towards buyers looking for hot tech on a tighter budget, which is definitely not a bad agenda, and they all pack quite a punch in terms of performance.

In total, Lenovo is taking the wraps off no less than nine new products at MWC, including two smartphones, three tablets and four notebooks, each one hiding a few gems under the hood.

The details are in the hinges

Lenovo’s four new Windows notebooks include three convertible laptops and one detachable notebook, each offering a unique set of features.

What’s the difference between convertible and detachable laptops? Well, the convertible models are essentially notebooks that can be used as tablets without the screen coming off. You can twist and turn them in various ways but the screens will remain attached to the keyboards. Detachable 2-in-1s, on the other hand, are similar to what Microsoft’s Surface Pro line offers, and we’ve seen them around for years.

That said, there’s a lot of magic in Lenovo’s hinges. Thanks to a special hinge design, the 14-inch Yoga 710 ($799) is supposed to offer you 20% better Wi-Fi connectivity in tablet mode because that’s where the antenna resides. The 11-inch model won’t get the same Wi-Fi amplifying hinge just yet.

Finally, the Ideapad MIIX 310 detachable laptop packs a special hinge that lets you adjust the angle while in laptop mode. And yes, the keyboard is included in the package. How much does will it cost? Just $229 starting this June.

We’re used to seeing fast-charging batteries in some of the hottest smartphones out there. But what if laptops could charge just as quickly? That’s what the Yoga 510 will deliver. Available in 14-inch ($599) and 15-inch ($699) models, the laptop features a new “diamond cut palm rest, “ and offers 8.5 hours of battery life. On top of that, you’re only going to need 2.5 hours to get a full 100% charge.

Lenovo’s new Android phones are called the Vibe K5 and Vibe K5 Plus. You can’t tell them apart when holding them side by side; that’s how similar they are. The K5 Plus is the better version, packing a Full HD display, a faster Snapdragon 616 processor and a metal rear cover. Both handsets have the same 2,750 mAh battery inside that’s user-replaceable. And given that the K5 and K5 Plus will retail for $129 and $149 when they launch later this year, buying extra batteries for them seems like a no-brainer.

The 11-inch Yoga 710 convertible laptop is Lenovo’s way of competing with the MacBook and other similarly sized devices. The laptop is just 14.9mm thin and weighs 2.35 pounds, but it packs a massive punch.

We’re looking at a Full HD touchscreen display, up to a sixth-generation Intel chip, up to 8GB of RAM and up to 256GB of storage, all packed in a neat metal unibody design. The laptop also has a slew of ports you can use, including one USB 3.0 and one micro-HDMI port – there’s no USB Type-C port on it though, or on any other new Lenovo gadget.

The 10-inch MIIX 310 is also a computer that will appeal to some buyers, but it doesn’t offer the same sophisticated design as the new Yoga 710.

I got a chance to test the Dolby Atmos inside the K5 smartphones during my time with Lenovo, and the sound is incredible. The dual speakers on the back certainly help, but it’s the Dolby Atmos software that delivers surround-like sound to your ears. Just pack a decent pair of headphones and some high quality music, and you’ll hear it for yourself.

Some of the new Windows 10 devices also have Dolby sound – though the Yoga 510 has Harman sound instead. Similarly, the three new Android tablets Lenovo is showing off in Barcelona also have Atmos tech inside.

Tablets for the masses

Lenovo’s three new Tab3 tablets are all designed for budget-conscious buyers. The Tab3 7, Tab3 8 and Tab3 10 Business start at $99, $129 and $199, respectively, although prices do vary depending on which wireless choices you make and the amount of RAM you want.

The tablets will ship in colorful combinations and are suited for work and play. The Business model will appeal to customers looking to separate their work chores from Netflix binges – and there’s security in place protecting your Android for Work experience on the 10-inch tablet.

The other two devices will appeal more to families. Each tablet supports multiple user profiles, including a specialized kid mode that will let parents restrict access for their children.

We don’t buy new tablets every day, which means it’ll be great if they can survive an accident every now and then, like water spills and drops. All three tablets are IP52 dust and splash proof thanks to a layer of P2i water-repellent coating, and the 10-inch tablet features a Gorilla Glass 3 display that’s supposed to prevent damage in the event of an accidental drop.

Over the years, Lenovo came to the same conclusion that we did: the fewer UI gimmicks on top of Android, the better the user experience. The company’s new Android devices certainly seem to follow that line of thinking. There will be some apps built on top of Android, but aside from that you’re getting Android builds that are pretty close to what Google envisioned.

Unfortunately, it’s just the Android tablets that are going to run Android 6.0 right out of the box, with the smartphones set to launch with Android 5.1 for the time being.

Sure, I did notice a glitch here and there, but the final versions of the software should further iron out some of the bugs.

The Tab3 10 Business comes with full Android for Work support including security and encryption, as well as remote control. Let’s just see what Google does with Android N in terms of better supporting tablets for work.

f.lux and Night Mode, anyone?

Speaking of Android customization, Lenovo is also taking action against that blue light that’s messing with our sleep.

The new 7-inch and 8-inch tablets come with Adaptive Display tech that lets you adjust the hue of the screen depending on what app you’re using and when you’re using it. The feature is similar to the f.lux app and Apple’s Night Shift, but it has four different modes that can be used depending on the situation.

I just wish that some of the tech Lenovo showed off on certain devices would be available across the board. But due to current tech limitations and/or cost considerations, you won’t get the super Wi-Fi hinge and the fast-charging laptop battery in every product just yet. That’s why MIIX 310 won’t get the same slim design as the 11-inch new Yoga laptop. However, it certainly looks like Lenovo’s new devices have a lot to offer, including a bunch of nifty innovation at some fantastic price points.