Meet Kangaroo, a $99 Windows 10 desktop PC as small as a smartphone 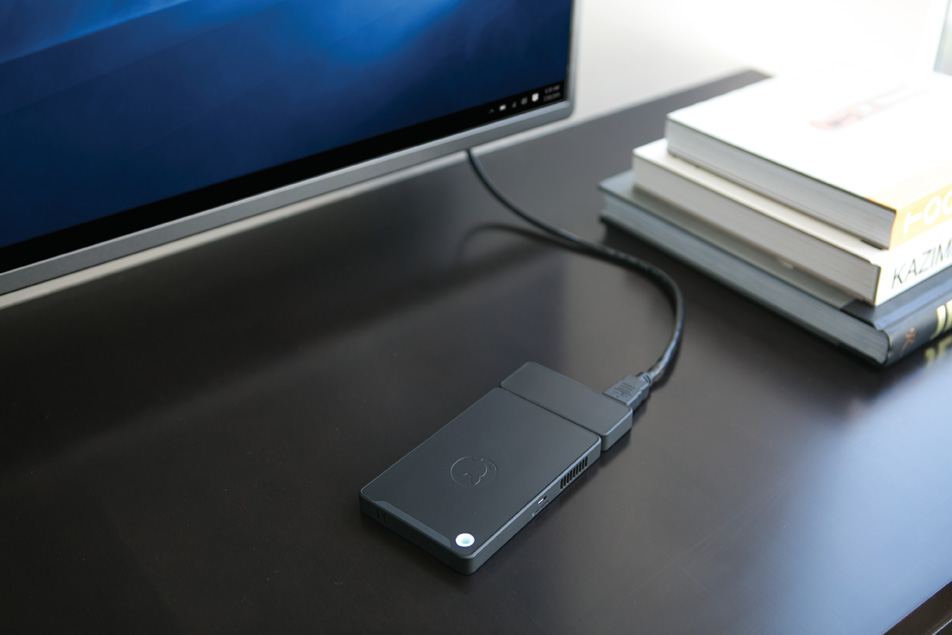 Desktop PCs aren’t exactly en vogue right now. In fact, PC sales are still in decline across the board and Windows 10 hasn’t been the sales boost computer vendors were hoping for despite its overwhelmingly positive reception from users. Pundits and analysts have their theories on why this negative trend in the PC market has persisted, but perhaps the market simply needs something fresh and new to help pique consumer interest.

If it’s fresh and new you’re looking for at a surprisingly affordable price point, the brand new Kangaroo PC from InFocus could be just what the doctor ordered.

InFocus bills the Kangaroo as the world’s smallest portable desktop PC. The device weighs just 200g and measures 124mm tall, 80.5mm wide and 12.9mm thick, making the Kangaroo roughly the size of some of the larger phablets currently on the market. There are even one or two phablets that are far bigger than the Kangaroo. A removable base unit adds an HDMI port, two USB ports and a DC power port to the Kangaroo, and it’s just 46.9mm tall.

There is currently no widely used name for this class of device because it’s among the first of its kind — a truly portable computer that can connect to nearly any screen around you and instantly transform it into a desktop PC. Perhaps we can think of it as the ultrabook of desktop computing.

In terms of specs as they might compare to a traditional tower desktop, the ultrabook vs. notebook comparison is absolutely apropos. InFocus currently offers one version of the Kangaroo and it is powered by an Intel Cherrytrail (Atom Z8500) processor clocked at 2.24GHz. This class of Intel processor requires no fan, enabling a design that is as compact as possible. The Kangaroo also includes 2GB of LPDDR3 RAM and 32GB of eMMC storage, and it can be expanded by as much as 128GB at a time thanks to microSDXC support.

Dual-band wireless AC ensures a speedy Wi-Fi connection, which is important since the device does not have an ethernet port, just as most ultra-portable notebook computers no longer include ethernet ports. Bluetooth 4.0 cuts back on even more wires by letting the user connect a wireless keyboard and mouse rather than hogging the USB ports on the included base. Only two cables are necessary with the Kangaroo, an HDMI cable to connect to a display and the power cord. The device does pack a battery though, and it will last for about four hours of what InFocus calls “casual use.”

As far as performance goes, I’ve been testing the Kangaroo for several days and I’m impressed. Windows 10 Home Edition is spry on the device, but it’s not quite fit for too heavy a load. It is very well suited for browsing the web, working with office files, streaming media and other common tasks. And you won’t have to worry about protecting your data on the go with the Kangaroo, since it includes a built-in fingerprint scanner for protection far more effective than a simple password.

“Consumers own many different devices including tablets, laptops and desktop PCs. Each device is used in different locations for different purposes. Kangaroo is the first product to allow you to use the same PC for all applications, in any environment,” said InFocus’ marketing boss Lawrence Yen. “Unlike stick PCs and other pocket PCs, Kangaroo works with all of your existing devices and can be docked at home or tossed in your bag to use anywhere, powering and providing Windows 10 access on the go.”

The device truly can be used anywhere, not just in homes and offices where a monitor or TV is available. Thanks to the company’s free OS Link software for iOS, the Kangaroo can connect to an iPad as well in either desktop mode or in tablet mode.

It really is a novel computer, and it’s remarkably accessible at $99 including the base. And best of all, perhaps, is the fact that this isn’t just some nifty idea about to begin a crowdfunding campaign. The Kangaroo is real, and it’s available to purchase beginning today on Newegg.com and from Microsoft’s online store. The device will also be available to test in person in Microsoft’s physical retail stores starting in mid-November.

A conversation with InFocus ahead of today’s announcements revealed a team that is excited to be breathing new life into the desktop PC space. InFocus also says that this first Kangaroo model is only the beginning, and it has big plans for the future. Higher-end models will be made available, but the company has plans to release additional base units that can be docked with the Kangaroo to add new functionality.

User feedback is also going to play a big role in the Kangaroo’s future. InFocus will look to users for guidance in developing future Kangaroo base attachments and new models. And the company made it quite clear that this first model won’t be left behind thanks to the docking system it incorporates. New bases can add a wide range of features to the Kangaroo in a matter of seconds.

“We wanted to create something that is incredibly affordable, portable and allows you to access Windows 10 and all of your files – from work to media – on any device,” Yen said. “You can access any file, any time without worrying about access to a network, upload and download times or file corruption. With its power, capacity and features, Kangaroo will change the definition of mobile computing.”