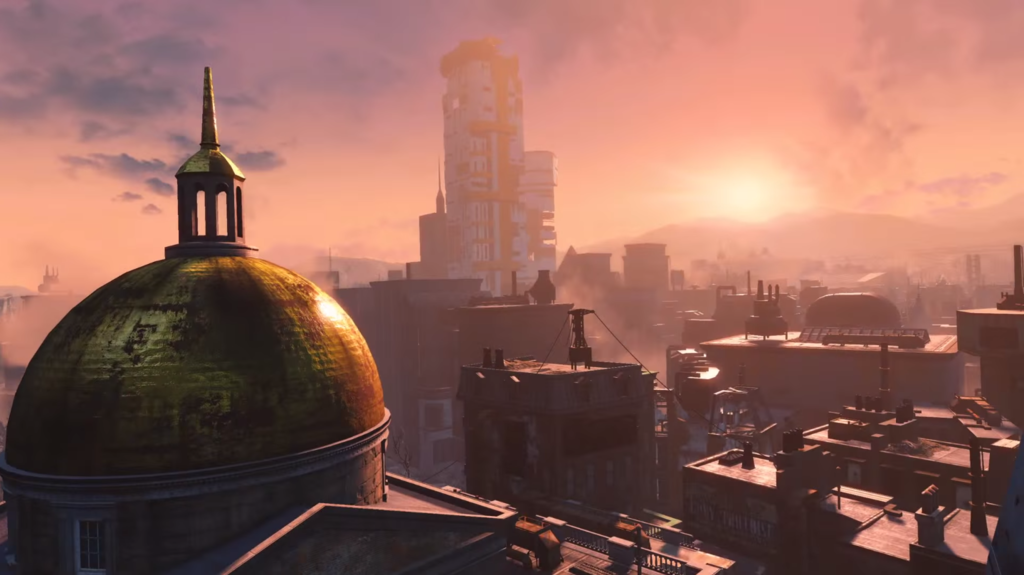 As both a native Bostonian and a Fallout fan, I am beyond excited by the new Fallout 4 trailer, which confirms that the game is indeed set in my hometown of Boston. Below I’ve taken some screencaps of the trailer that clearly show the ruins of famous sites in Boston and compare them to what they look like in real life.

WATCH THE TRAILER HERE: Fallout 4 revealed for PS4, Xbox One and PC

Fenway Park: You can see the iconic Green Monster and stadium lights in the background of this area, which would be somewhere around where present-day Lansdowne Street is. Note too the ruined souvenir stand called Swatters that has a giant baseball bat on its roof. Oh, how I long to see ghouls wearing David Ortiz jerseys in the future…

Scollay Square: This one isn’t too hard to figure out since we can see the words “Scollay Square” written on the building to the left-hand side of the shadowy figure.

Interestingly, the real Scollay Square used to be a bustling commercial district that was completely torn down in the early 1960s. It used to look like this:

The Paul Revere statue and the Old North Church: There is absolutely no way this could be anything else, although it seems the nuclear apocalypse has left a lot less vegetation compared to what was once there.

The U.S.S. Constitution: One of the great warships in American history, the Constitution has been upgraded with some more futuristic equipment in the new Fallout game.

The Bunker Hill Monument and the Bunker Hill Lodge: This is definitely the large obelisk on Bunker Hill that was built to commemorate one of the most famous battles in America’s Revolutionary War. Once again, it seems the nuclear winter has left the statue in a shape of disrepair.

The Massachusetts State House: Finally, this screencap shows the center of Massachusetts’ state government, complete with its iconic golden dome.