Evolve review: The thrill of the hunt 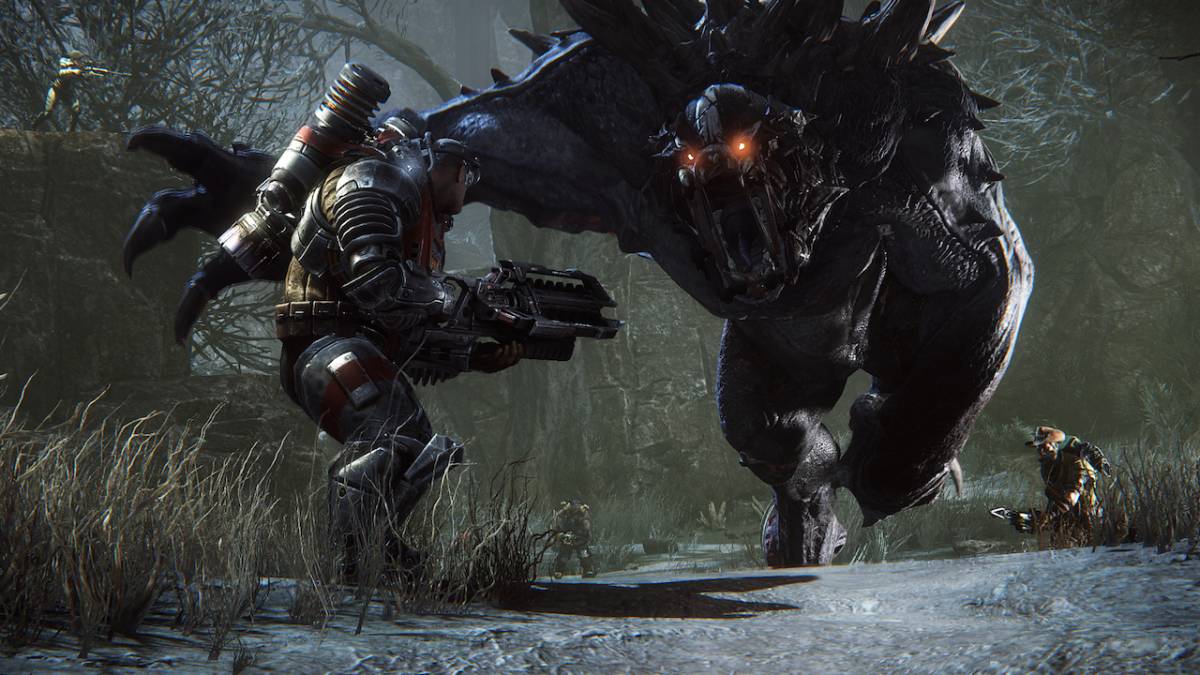 Our Medic is dead. The Trapper is fleeing for her life with the Monster just a step behind. The Assault is pumping as much electricity as he can into Goliath and I’m still trying to figure out how to play Support.

Fortuitously, the Monster stumbles into one of the Trapper’s traps just as I accidentally press the button that makes missiles rain down from the sky. I say accidentally because I was trying to switch weapons. I just hit the wrong button. The missiles connected; Goliath’s health dropped rapidly; our team rallied from behind and stormed back for a breathtaking victory.

This is how about 30% of my games of Evolve have gone. The other 70% have been blowouts one way or the other.

Evolve is an asymmetrical mutliplayer first-person shooter from Turtle Rock Studios. The asymmetrical part of that description is referring to the fact that a team of four player-controlled Hunters are facing off against one enormous Monster. The Monster is fairly vulnerable at the beginning of a match, but by feeding on the wildlife scattered throughout the map, it can gain strength and eventually evolve.

Once it evolves to stage 2, it becomes significantly harder to take down. At stage 3, it has a pretty distinct advantage over the Hunters.

The standard mode, Hunt, is where you’ll get your bearings. The Monster evolves and the Hunters track it down. Once you’ve gotten a hang of the controls and chosen your preferred class, you’ll want to give Evacuation a try. This is the game’s take on a campaign: 5 missions, each on a different map, with new objectives every time.

Your mileage will inevitably vary from match to match — after all, this is a team-based shooter. You’re going to get stuck with a Trapper that doesn’t know how to throw down a trap. You’re going to meet a Medic that can’t figure out how to heal you. You might even find the rare Assault that isn’t willing to charge headfirst into battle.

Learning the Hunter classes takes time, but controlling the Monster is incredibly stressful, even after you’ve learned the basics. You have to keep several plates spinning for the entire match: detecting how close the Hunters are, judging the best time to feed, deciding which skills to level up when evolving and knowing when to fight and when to take flight. If you run into a decent team, you’re going to have your work cut out for you.

On the other hand, there’s nothing more satisfying than annihilating a team of four players all by your lonesome… even if the Wraith monster is a little unbalanced. Seriously, it’s impossible to keep track of that thing.

But Evolve wouldn’t be a modern first-person shooter without an all-encompassing progression system, now would it? Everything you do in Evolve contributes toward both your overall level and the progression of whichever Hunter or Monster you chose. Thankfully, you can rank up solo as well as online, so if you find yourself getting destroyed by other players, you won’t lose anything by jumping out of PvP for a while.

Once you cause enough mayhem with the first character from each class, you’ll unlock the next. There are three characters in each class and three Monsters as well. They each perform the same roles, but functionally, they’re entirely different beasts.

For example, the first Assault class character, Markov, is equipped with an assault rifle, a lightning gun and arc mines. The second Assault, Hyde, has a flamethrower, a minigun and toxic grenades. Parnell, the final Assault, brings a shotgun, a rocket launcher and a boost ability called Super Soldier into battle. Similar yet different. You’ll have to change the way you play between characters, even within the same class.

These differences are even more pronounced with the Monsters. Goliath, Kraken and Wraith feel completely different from one another — it’s like playing an entirely different game.

The question I kept asking myself throughout my time with the game was this: “Is Evolve better than Left 4 Dead?” They’re made by the same studio, have similar traits and rely on teamwork, but I don’t really think you can compare the two. That’s a compliment, by the way. These are two distinct games that cover the same territory, not a game and its spiritual sequel.

Despite the game’s approach to DLC (which is incredibly disappointing and deserves to be admonished) and the more-than-occasional uneven matches, Evolve is a worthy entry into the team-based shooter canon. It’s probably not going to captivate you for months to come, but it scratches an itch that not many other games are even attempting to scratch, and for that alone, it deserves consideration.

2K Games provided BGR with a copy of Evolve on PlayStation 4 for this review.