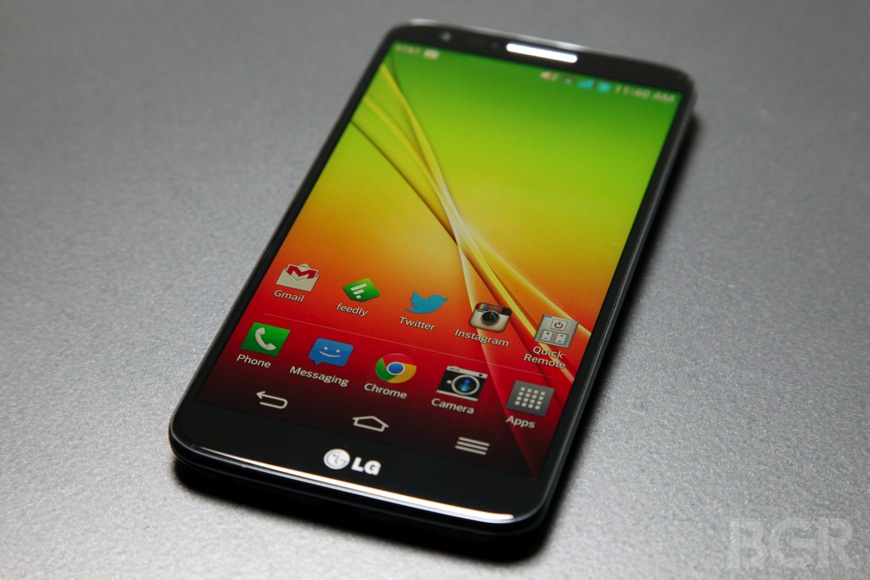 LG really surprised me with the Optimus G in 2012, and I was hoping history would repeat itself with the brand new LG G2 in 2013. The company has always built good phones, but the Optimus G was an unexpected class leader with cutting-edge specs, sleek software, solid performance and fantastic hardware made mostly of glass. It was an awesome smartphone. When LG unveiled the smartphone’s successor last month though, it raised a lot of eyebrows. The vendor spent a surprising amount of time focusing on trivialities like the phone’s volume and power buttons, which have been moved to the back of the device, and it really failed to wow us with exciting new features. But now that the G2 is hitting store shelves in the U.S., is there more to this phone than meets the eye?

I have been testing AT&T’s version of the LG G2 for about a day and a half now, and that most certainly is not enough time to offer a full review. With the phone set to debut on Thursday at Verizon Wireless and on Friday at AT&T, however, I wanted to share some quick thoughts as people begin to consider the handset.

First and foremost, LG is falling into the feature-spam trap.

Rather than focus on a few truly innovative new features and use them to draw attention to the G2, LG has followed Samsung’s lead and dumped anything and everything it can into the G2. And when I say “follow Samsung’s lead,” I mean LG appears to be copying as many Galaxy phone features as possible and stuffing them all into its devices.

Remember all of the new features Samsung showed off when it unveiled the Galaxy S4? They’re pretty much all present in the G2.

One setting lets you pause video when you turn away from the screen. Another prevents the phone’s display backlight from timing out as long as its front-facing camera detects your face looking at the screen. Motion and swipe gestures let you answer calls, pause apps, silence alerts, snooze alarms, pause media and more. Voice Mate is LG’s answer to S Voice (and Siri), allowing users to speak queries, send messages, create calendar events and adjust settings. And so on.

LG has also layered its own new features on top of those. Plug & pop, for example, lets users configure a new menu of apps that pops up when accessories are connected to the phone. Guest mode allows the user to set a specific unlock pattern that will enable a limited mode where only certain apps and data are accessible. Slide aside lets the user push apps aside with a three-finger gesture and then switch between running apps with more three-finger swipes. But LG also included Android Jelly Bean’s standard multitasking interface, so now there are two completely different multitasking UIs available. Weird.

It’s a lot to digest. Like the Galaxy S4, the LG G2 is a jack of all trades that does almost everything you can imagine pretty well, but there isn’t much it does exceptionally well. Owners should be prepared for two things: 1) You will see a ridiculous amount of pop-up tips for the first hour you use your handset. 2) You will, in all likelihood, forget about most of the features buried within the G2. That’s fine for the useless bells and whistles, but there are also some nifty features that some users will never even come across because there’s so much going on.

Performance has never been a problem for LG and the G2 is as smooth as they come. Android 4.2.2 Jelly Bean flies on this phone thanks to the quad-core Snapdragon 800 processor and 2GB of RAM. I have yet to trip it up a single time, despite my best efforts. The G2 also ships with 32GB of storage and no memory card slot.

The best thing about the G2, without question, is its 1080p display. LG stuffed full HD 1,080 x 1,920-pixel resolution into its 5.2-inch IPS LCD panel, and the result is a ridiculous pixel density of 423 ppi. Far more important than the numbers on paper, however, is the look. LG’s display is absolutely gorgeous. It’s remarkably bright, the contrast is outstanding, colors are unbelievably vivid and graphics and text are silky smooth.

Making things even better is the fact that the bezel around the display is remarkably thin on the sides (just 2 millimeters thick), and even above and below the screen. I haven’t done the math but I would venture a guess that the display on the G2 takes up a larger percentage of the phone’s face than any other leading smartphone. In fact, the G2 is almost the same size as the HTC One, which features a display that is almost half an inch smaller, diagonally.

As a result of this great design on the G2, the hardware kind of melts away as you use it and all that’s left is that big, beautiful display.

The screen’s one fault might be the grid of dots from the touch layer that is very visible when the display is off and still somewhat visible in certain lighting even when the display is on. This is an issue that impacts many smartphones and tablets, though it is not present in most top models these days.

While the best thing about the G2 sits on the front of the phone, one of the worst things about the phone can be found around back.

LG’s hero phone for 2012 featured a glass rear panel that gave the phone a nice premium look and feel. Fast-forward to 2013 and LG opted instead for a glossy plastic that I absolutely hate.

The G2’s case doesn’t feel cheap and flimsy like Samsung smartphones do, but it’s a magnet for grease, dust and dirt to the point where it feels disgusting to hold. My hands are extremely dry from being washed and Purelled about a hundred times each day, but it still only takes about a minute of using the G2 before the back is coated in a layer of slime. Put the phone down on any table or other surface, and it will also come away covered in dust, dirt and who knows what else.

Do not — I repeat, do not — use this phone without a case unless you’re a master at suppressing your gag reflex.

LG really took one step forward and two steps back with its new flagship G2.

The phone’s design moves everything out of the way, keeping the user’s focus on that big, bright, beautiful display. It’s easily among the best smartphone screens I have ever seen. But the hardware is a big step in the wrong direction for LG, and the software is bursting with me-too features with little, if any real excitement or innovation.

Performance is not an issue on the G2, which can easily go head to head with any flagship phone in the world. It’s fast, smooth and very responsive. The 13-megapixel camera with optical image stabilization takes good pictures and has plenty of bells and whistles, calls are loud and clear, and the phone is surprisingly compact for a handset with such a gigantic display. I can’t really comment on battery life at this point, but the 3,000 mAh power cell still had plenty of juice left when I woke Thursday morning after plenty of testing on Wednesday.

Unless you approach smartphone purchases as most people approach television purchases, where the display is the most important factor and other features are a distant second, the G2 may be a tough sell. Apple’s iPhone 5s and iPhone 5c launch in a week, the Galaxy S4 is still going strong, the Moto X is a solid option, the Galaxy Note 3 is on the way and the HTC One is still the best overall Android phone money can buy. Especially in the U.S. where LG will be outspent by each of its rivals on marketing and advertising, the G2 is going to have an unbelievably difficult time standing out in the crowd.

The LG G2 will be available for purchase beginning Thursday at Verizon Wireless, Friday at AT&T and next Wednesday online from T-Mobile. It costs $199.99 with a new two-year contract or $600 off contract.