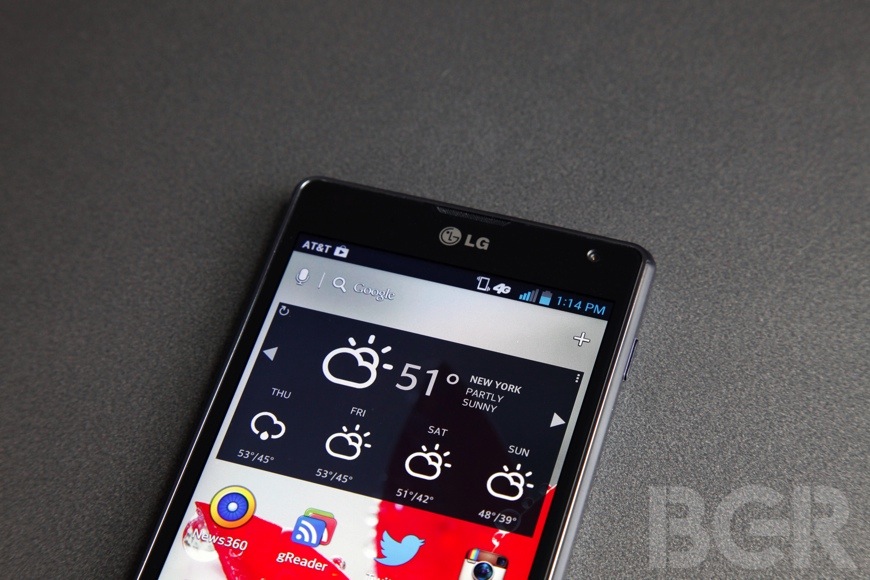 According to recent estimates Canaccord Genuity analyst Michael Walkley provided to clients in a recent research note, Apple (AAPL) and Samsung (005930) combined to capture 106% of smartphone industry profits in the third quarter this year. That’s not a typo. Big-brand smartphone vendors are still struggling to find a way to stop losing money while Apple pulled in 59% of industry profits according to Walkley’s figures, and Samsung accounted for 47%. But Samsung actually wasn’t the only global Android vendor that managed to turn a profit last quarter.

While it doesn’t quite measure up to the $6 billion profit Samsung racked up in the third quarter, the company’s South Korean rival LG (066570) posted a $139 million profit for the quarter. And the company’s mobile division, which had lost money in the prior quarter, managed to eke out a profit of $19.4 million.

Like Sony (SNE) and HTC (2498), LG has struggled to build Android phones that stand out in a market dominated by Samsung and Apple. It hasn’t been easy. Apple spends more than $1 billion each year marketing its products and Samsung has deep pockets as well, plus it has hundreds of carriers on its side. Meanwhile, smaller vendors continue to put out fantastic phones that go largely unnoticed.

LG is looking to buck the trend with its latest high-end smartphone, the Optimus G, and with enough marketing, ample carrier support and some good old-fashioned luck, the company really could have a winner on its hands.

I’ve been using LG’s Optimus G smartphone on and off for the past few weeks, and while other phones have come and gone during that period of time, I can’t help but keep going back to LG’s quad-core Android phone. Here are some of the reasons why:

LG’s latest Optimus UI: Every Android vendor has its own user interface and service layer on top of Google’s mobile operating system, and some are better than others. LG’s “Optimus” Android UI didn’t start off terribly strong, but I really like this latest iteration.

On the surface, the Optimus user interface adds a pleasant look to Android 4.0.4 Ice Cream Sandwich. Icons are fun and colorful but not too cartoony, and the graphics are mostly unique and well designed. I also really like what LG has done with the phone’s Settings.

As Android progresses and new features are added, certain aspects continue to get more complex. Take some time to flip through the settings application on any recent Android device and you’ll inevitably stumble upon something you never knew existed. Some vendors even bury key features in the Settings app — Samsung’s AllShare Cast screen-sharing functionality is a perfect example.

On the Optimus G, LG has split the device’s settings into tabs headed Networks, Sound, Display and General. This simple separation makes navigating the settings far simpler than it is on rival phones, and it also makes features accessible to the user that might otherwise go unnoticed.

Optimus features: Beyond the interface customization LG has added to the Optimus G, there are also some great features that enhance the user experience. Examples include Wise screen, which keeps the device’s display lit up as long as the front-facing camera detects the user’s face; Wise ringtone, which increases the phone’s ringer volume when there is a lot of noise in the area; and Quiet time, which allows users to automatically silence all alarms and notifications each day on a schedule. Unlike Apple’s limited implementation, Quiet time allows users to schedule different “do not disturb” times each day since a single daily schedule obviously won’t be ideal for weekdays as well as weekend days.

Performance: Technology is finally where it needs to be to enable a smooth Android experience, and LG’s Optimus G is as smooth as they come. Apps open very quickly on the Optimus G, and animations and scrolling — two areas that give still give some Android devices trouble — are remarkably fluid. The phone is powered by a Qualcomm Snapdragon S4 Pro APQ8064 chipset comprised of a quad-core Krait CPU clocked at 1.5GHz and an Adreno 320 GPU. LG also added 2GB of RAM and a 2,100 mAh battery that powers through a full day with moderate usage but definitely struggles with heavier usage.

The display: LG’s televisions have rivaled market leader Samsung for some time when it comes to display quality, but the company’s smartphones have historically not been mentioned among handsets with class-leading displays. With the Optimus G, that changes. LG’s IPS LCD panel packs 768 x 1,280 resolution into a 4.7-inch display for a pixel density of 318 ppi. Contrast is exceptional and color reproduction is outstanding. Apple, Samsung and HTC take note: You’ve got some real competition in LG.

LG goes where Samsung won’t: Samsung is the undisputed champion right now among Android vendors. No other company can touch it. As popular and as profitable as Samsung handsets are though, there is one thing the are not: Top-quality hardware.

Hold a Galaxy S III in one hand and an iPhone 5, HTC One X or Nokia (NOK) Lumia 900 in the other, and the difference is instantly noticeable. The Galaxy S III feels light and cheap, wrapped in flimsy plastic and topped with wobbly buttons. The iPhone, One X or Lumia 900 on the other hand are solid and substantial. They feel like high-end devices.

LG’s Optimus G should without question be added to that list. The case is made out of plastic just as the Galaxy S III or Galaxy Note II are, but it is not flimsy, glossy plastic. The Optimus G is rock solid with no creaks or wobbles to be found. The weight is fantastic at 5.19 ounces and the back of the device is a smooth glass pane with a nice pattern that adds some differentiation.

The LG Optimus G launches on November 2nd from AT&T for $199.99 on contract, and on November 11th from Sprint for the same price.