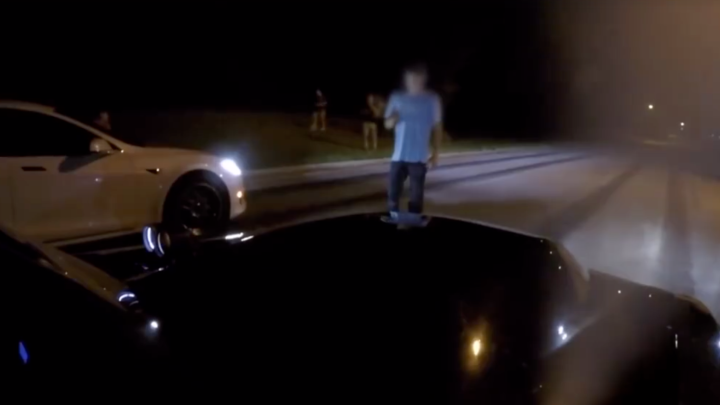 Tesla makes fast cars. The company’s all-electric Model S is extremely quick even in its base trim — with a 0-60 mph figure of just 4.3 seconds — but things go from impressive to downright silly with the Model S P100D, which is capable of a 0-60 mph sprint in just 2.5 seconds. As such, it’s the ideal vehicle to bring to a gathering of motorheads on a deserted road who race each other for cash. That’s just what one P100D owner did, and the results, while predictable, are still a lot of fun to watch.

The video, which boasts some impressive camera work despite the obviously amateur nature of the impromptu “event,” shows a stock Model S P100D decimating every car it comes up against, including several Mustangs of various generations and even a Nissan GT-R. Many of the competitors’ vehicles are modified, including at least one with a nitrous system equipped, but none of that seems to matter when faced with the all-wheel drive electric monster that Tesla has produced.

It’s an impressive showcase for the P100D, but there’s obviously many factors at play here that contribute to the final result. The track — sorry, road — is very clearly covered with rocks and random road debris, and isn’t particularly even. The Tesla’s all-wheel drive gives it a big advantage on such a surface, and as you’ll see by the number of times the Mustang drivers lose control, it’s not an ideal racing venue.

All that said, it’s clear that the P100D is an extremely capable vehicle, and its $140,000 price tag is well deserved.