This past May, Tesla posted a customer story on its website detailing a harrowing crash involving a Model S and a massive tractor-trailer carrying two jet engines. Posted by Michelle Scott, the story details how her husband Bill was driving his Model S before getting rear-ended, ultimately sending him flying into said tractor before spinning into an SUV that was travelling ahead of him.

The Model S was severely smashed and damaged in the process, but thanks to Tesla’s unwavering obsession with safety, Bill managed to survive an accident that emergency personnel on the scene — based on the wreckage alone — instinctively assumed was fatal.

The state trooper that met us at the emergency room with the initial police report even had a look of disbelief on his face. He said to Bill, “We all thought we were rolling up on a fatality. I can’t believe I’m standing here talking to you, buddy. You’re lucky you were driving that car. That’s really the only reason you are still here.”

Pictured below is what the Model S looked like after the fact. 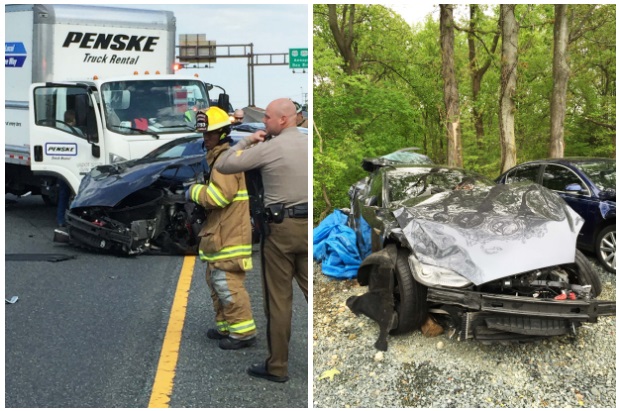 Now, eight months later, footage of the accident taken from the Model S’ Autopilot camera has emerged, providing us with a visual perspective of the incident.

The video is a bit choppy, but it does give us a bit more perspective as to the severity of the impact and the size of the tractor-trailer involved.

Pulled some more #TeslaCrashFootage from a salvage P85D from Maryland. Car get runs down by a truck hauling a jet engine? Ouch. #Tesla #P85D pic.twitter.com/e817yU5AOm

Scott concludes by saying: “The Tesla is built like a protective capsule around the driver. And it saved my husband, the father of our kids.”

Indeed, it’s no secret that Tesla CEO Elon Musk is obsessed with ensuring that Tesla vehicles are best in class across all safety metrics. Famously, the first Model S ever tested by the U.S. National Highway Traffic Safety Administration, way back in 2013, earned a 5-star safety rating across every single tested category. Consequently, the Model S enjoys a safety rating that only 1% of manufactured cars ever attain.

In 2013, Tesla issued a press release touting many of the Model S’ unique safety features.

Not surprisingly, stories of Tesla passengers surviving horrific car crashes isn’t all that uncommon. Just a few short months ago, for example, a Model S with 5 passengers got into an accident and flew 82 feet in the air before violently crashing back down to earth. Unbelievably, all 5 passengers emerged with non-life threatening injuries. The picture below, as the old adage goes, is worth a thousand words.