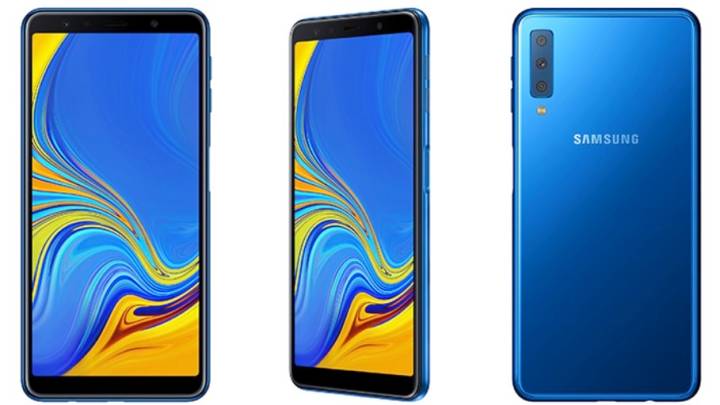 Samsung on Thursday came out of left field with a phone that’s not a flagship, but which happens to sport a few features unseen on Samsung flagship handsets. The new device isn’t part of the iconic Galaxy S or Note families. Instead, it has a boring name that doesn’t do it justice: The Galaxy A7.

Anyone shopping for high-end Android handsets is likely to ignore that product name because it screams mid-range and affordable. The Galaxy A7 is indeed supposed to be a mid-range Android device, although the price hasn’t been shared at this time.

What’s interesting about the handset is that its main feature is a triple-lens camera on the back that’s not available on any Samsung device right now. We’re looking at a 24-megapixel main lens, an 8-megapixel Ultra Wide lens, and a 5-megapixel Depth lens. On the front, there’s a 24-megapixel selfie camera.

The main camera is placed near the top left corner, similar to what Apple does with the iPhone X phones. Samsung’s multi-lens cameras are usually found in a central position, both on the Galaxy S and Galaxy Note.

What’s also immediately clear is that the Galaxy A7 doesn’t have a rear-facing fingerprint sensor. But the sensor isn’t included into the screen either. That’s because it sits on the side of the phone.

The phone will come in four colors, including blue, black, gold and pink, and seems to arrive just in time to take on the colorful iPhone XR. Samsung choice of colors and wallpaper for the press render does look somewhat similar to iPhone XR renders.

It’s unclear when it’ll launch, or how much it’ll cost. But the Galaxy A7 does show that Samsung’s DJ Koh meant it when he said a few days ago that Samsung would bring novel features to mid-range phones for a change. “In the past, I brought the new technology and differentiation to the flagship model and then moved to the mid-end. But I have changed my strategy from this year to bring technology and differentiation points starting from the mid-end,” Koh told CNBC a few weeks ago after IFA 2018.

The Galaxy A7 must be how it all starts.