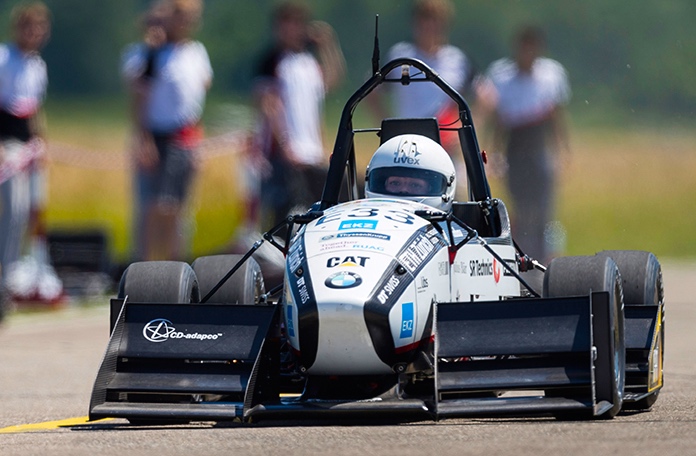 Tesla likes to boast that it only knows how to make fast cars. And with good reason, the Tesla Model S in Ludicrous Mode can go from 0-60 in just 2.8 seconds, making it one of the fastest cars by acceleration on the planet. Ranked slightly above Tesla are an assortment of cars from Porsche, Bugatti and Ferrari, with the Porsche 918 Spyder boasting the fastest 0-60 time for a production car in history with a blazing 2.2 seconds.

Well, there’s no a new record holder for the 0-60 title and it comes from an unlikely place: a motorsport student club in Switzerland.

Earlier this week, students from Swiss universities ETH Zurich and Hochschule Luzern showcased an mini electric car they built that looks like a shrunken down version of a Formula One race car. The car leaped off the starting line before recording a 0-60 time in an unbelievable 1.513 seconds. The end result? A new Guinness world record.

The car itself is primarily comprised of carbon fiber, weighs 370 pounds and sports 200 horsepower. Impressively, a team of about 30 students built the car in less than a year.

For more information, make sure to check out this video tour detailing the technical details of the record-setting car.

For a quicker overview, a press release on the record-setting achievement can be viewed below.

The Formula Student team at the Academic Motorsports Club Zurich (AMZ) accomplished its mission today: the grimsel electric racing car accelerated from 0 to 100 km/h in just 1.513 seconds and set a new world record. It reached the speed after covering less than 30 m of track at the Dübendorf air base near Zurich. The previous world record stood at 1.779 seconds and was set last year by a team at the University of Stuttgart.

The record-breaking Formula Student electric car was developed and built in less than a year by a team of 30 students at ETH Zurich and Lucerne University of Applied Sciences and Arts. grimsel is AMZ’s fifth electric vehicle and sets new standards in lightweight construction and electric drive technology. Thanks to the use of carbon-fibre materials, grimsel weighs just 168 kg. The four-wheel drive electric racing car has four specially developed wheel hub motors that are capable of generating 200 hp and 1700 Nm of torque. A sophisticated traction control system regulates the performance of each wheel individually, allowing the car’s acceleration to be increased even further. No large-scale production car – even one with a combustion engine – can reach an acceleration comparable to the grimsel.

An incredible achievement certainly worthy of a celebration.