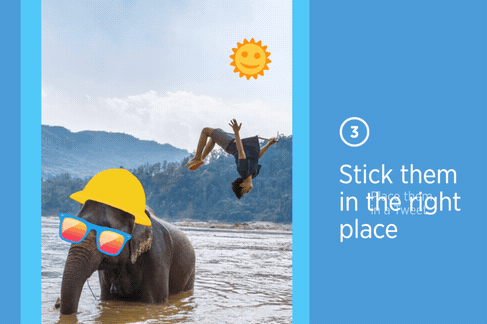 Starting sometime in the next few weeks, Twitter’s app will have #Stickers that you can plaster over your photos. Make no mistake: these aren’t the the same kind of stickers that Facebook and Snapchat and Kim Kardashian have been touting for years: these are, per the press release, #Stickers and therefore definitely new and interesting and better.

This is what Twitter has been missing all this time. This is the solution. Stickers and slightly longer tweets will finally Make Twitter Great Again.

The type of stickers you can use ranges from emojis, accessories, hats, and basically anything else you could ever want to stick over a photo to make it worse.

Even better, because Twitter is all about things being #Connected, the new stickers are also #connected. You’ll be able to view tweets by sticker, so you can see all the photos where other people have used the same sunglasses emoji.

The changes will be rolled out to the iOS and Android apps sometime in the next few weeks, alongside new location-based feeds. There’s no news on an opt-out button quite yet, but my fingers remain very firmly crossed.