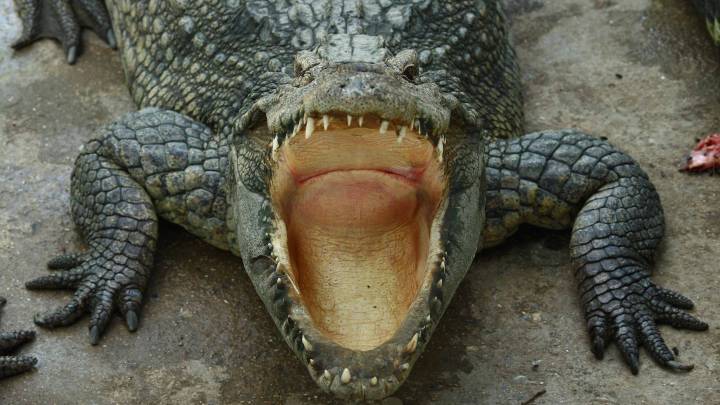 Modern crocodiles are often considered to be living fossils, as their lineage stretches back millions and millions of years. The ones we see today aren’t all that different from some of the species that roamed the Earth in ancient times, but some of their ancestors are truly in a league of their own.

Now, new research confirms earlier discoveries of an ancient crocodile ancestor Deinosuchus, which was so massive it would dwarf any croc on the planet today. The creatures could stretch up to 33 feet in length and had teeth so large they looked like bananas. Yeah, you wouldn’t want to run across one of these if you were taking a prehistoric stroll along a riverbank.

In a new paper published in the Journal of Vertebrate Paleontology, the researchers describe three species of Deionsuchus — Deionsuchus hatcheri, Deinosuchus riograndensis, and Deionsuchus schwimmeri, each of which dominated a different region of present-day America. The creatures were huge, and during their heyday some 75 million to 82 million years ago, they were the largest predators in the ecosystem. That’s a pretty impressive feat, especially when you consider that this was an age when dinosaurs roamed the Earth.

Researchers have theorized, based on injuries on dinosaur fossils, that these massive crocs may have preyed on dinosaurs when they got a bit too close to the water, as is the case with modern-day crocodiles and alligators.

“Deinosuchus was a giant that must have terrorized dinosaurs that came to the water’s edge to drink,” Dr. Adam Cossette, lead author of the study, said in a statement. “Until now, the complete animal was unknown. These new specimens we’ve examined reveal a bizarre, monstrous predator with teeth the size of bananas.”

The species, which has earned the name “terror crocodile” thanks to its incredible size and obvious power, may actually have more in common with modern alligators than crocodiles. Unlike crocodiles we see today, these ancient creatures had broad skulls with blunt snouts, rather than the pointed skulls of crocodiles.

As interesting as this new research is, there is still a big mystery that remains unsolved. Upon examining the fossils, the researchers spotted a pair of large holes “at the tip of the snout in front of the nose,” which they cannot account for.

“These holes are unique to Deinosuchus and we do not know what they were for, further research down the line will hopefully help us unpick this mystery and we can learn further about this incredible creature,” Dr. Cossette says.