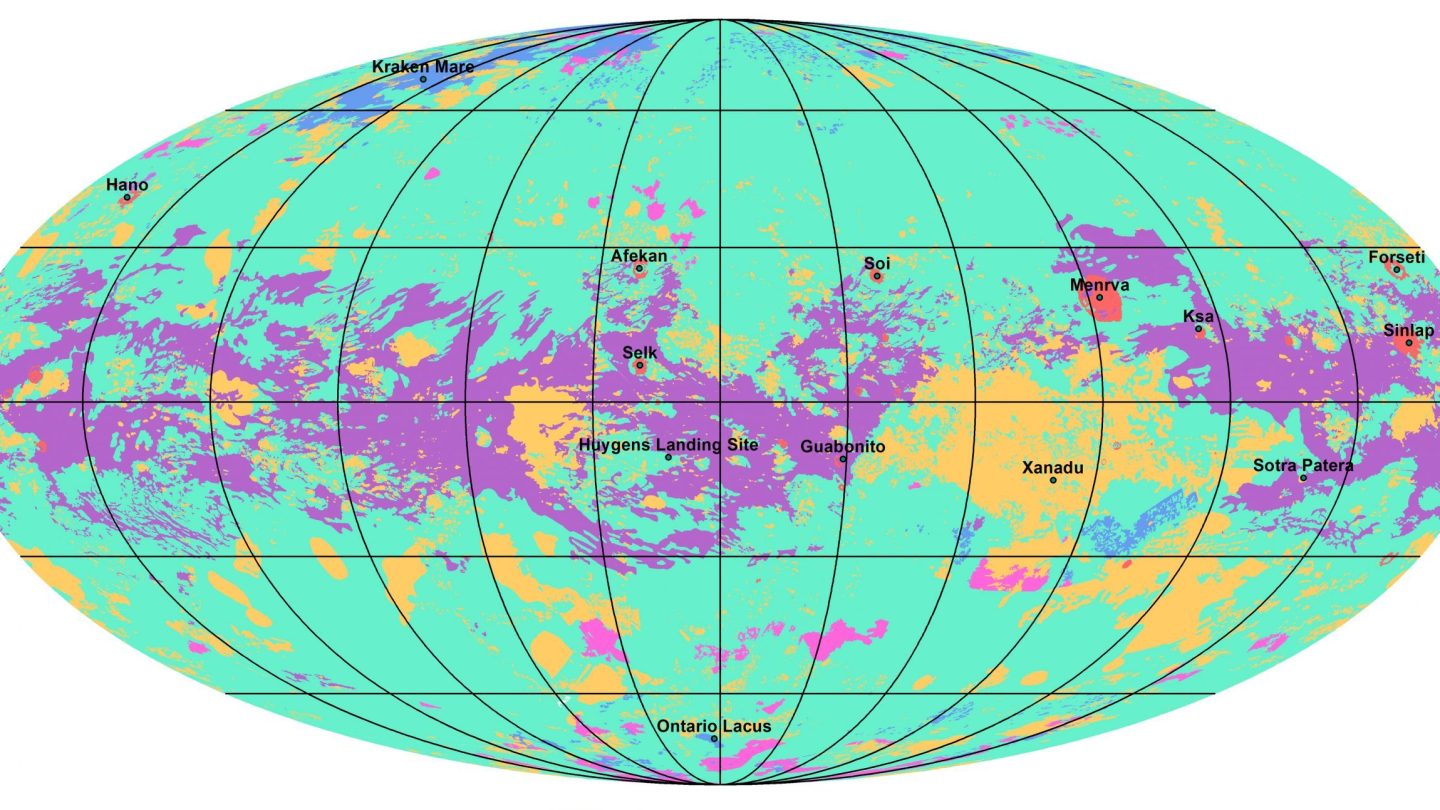 When NASA’s Cassini orbiter spent over a decade orbiting Saturn, the planet at the core of its mission wasn’t the only target of its observations. The probe also spent time spying on Saturn’s moons, including Titan. Now, with the Cassini mission just a distant memory, the data it sent back is still being mined for new discoveries.

Thanks to Cassini, scientists have been able to create a global map of Titan for the first time, and it’s the subject of a new paper published in Nature Astronomy. The geography of Titan, as it turns out, looks a lot like the continents of Earth, with rolling hills, dunes, and vast plains dotted with lakes. The climate, on the other hand, is a total nightmare for the vast majority of Earthly life.

Liquid water doesn’t exist on Titan’s surface, but there is plenty of other liquid to be found. On Earth, hydrocarbons like methane exist primarily as gasses. On Titan, the frigid temperatures allow them to exist as liquids. Lakes on the frosty moon are filled with the stuff, and it rains down from the sky just like liquid water does here on Earth.

The question of whether life would be possible on Titan is a complicated one. Scientists think that organic compounds are abundant on Titan, and that’s exciting, but the conditions are unlike anything we’d see here on Earth. The surface of the planet is a frozen crust, but researchers think it’s possible that liquid water flows deep within the planet. If that’s true, the combination of liquid water and organics could hint at biological processes at work.

“Organics are very important for the possibility of life on Titan, which many of us think likely would have evolved in the liquid water ocean under Titan’s icy crust,” Rosaly Lopes of NASA’s Jet Propulsion Laboratory and lead author of the research, explains. “Organic materials can, we think, penetrate down to the liquid water ocean and this can provide nutrients necessary for life if it evolved there.”

NASA is currently working on a mission that would send a flying drone to Titan. The mission is currently slated for 2026, but it would take a full eight years for the spacecraft to arrive, so we’ll have to wait until the mid-2030s to see what the moon has to offer.