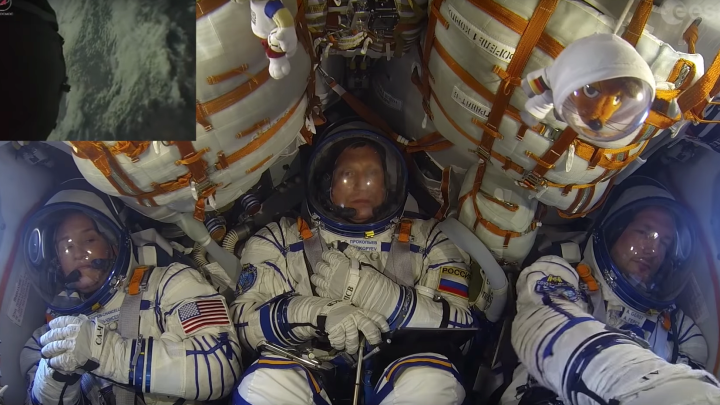 Very few people ever have the opportunity to fly into space. If SpaceX and Blue Origin manage to make space tourism a real thing, that could change, but for now it’s a pretty exclusive club. Being strapped into capsule perched above a powerful rocket sounds like it might be pretty scary, or at least exciting, but the latest video from ESA makes it all seem like a casual morning commute.

In the video, astronauts Serena Auñón-Chancellor, Roscosmos commander Sergei Prokopyev, and ESA astronaut Alexander Gerst are shown riding a Russian Soyuz spacecraft into the sky at speeds of nearly 18,000 miles per hour. All things considered, they seem very relaxed about the entire thing.

“The intense launch lasts less than ten minutes whereby the Soyuz spacecraft is propelled 1640 km and gains 210 km altitude,” ESA writes in the video’s description. “Every second for nine minutes, the spacecraft accelerates 50 km/h on average as the rocket’s boosters burn their fuel and are discarded.”

The speedy ascent is business as usual for the astronauts, who have gone through intense training and conditioning to prepare them for the hazards of life in space. As the spacecraft cruises skyward the astronauts monitor their instrument panels and perform various tasks.

Hilariously, the center passenger — Commander Prokopyev — is forced to use a telescoping rod to reach the buttons in front of him due to the positioning of his seat. For all the incredible technological advances that the space age has brought with it, the mission’s commander has to resort to a metal poking tool just to scroll through computer menus. Amazing.

Russia’s Soyuz program has been incredibly successful, and Roscosmos has become the default option for astronauts who need to head to the International Space Station. Eventually, other companies might get a chance to haul astronauts to the ISS, but for now the trip to space goes through Russia.