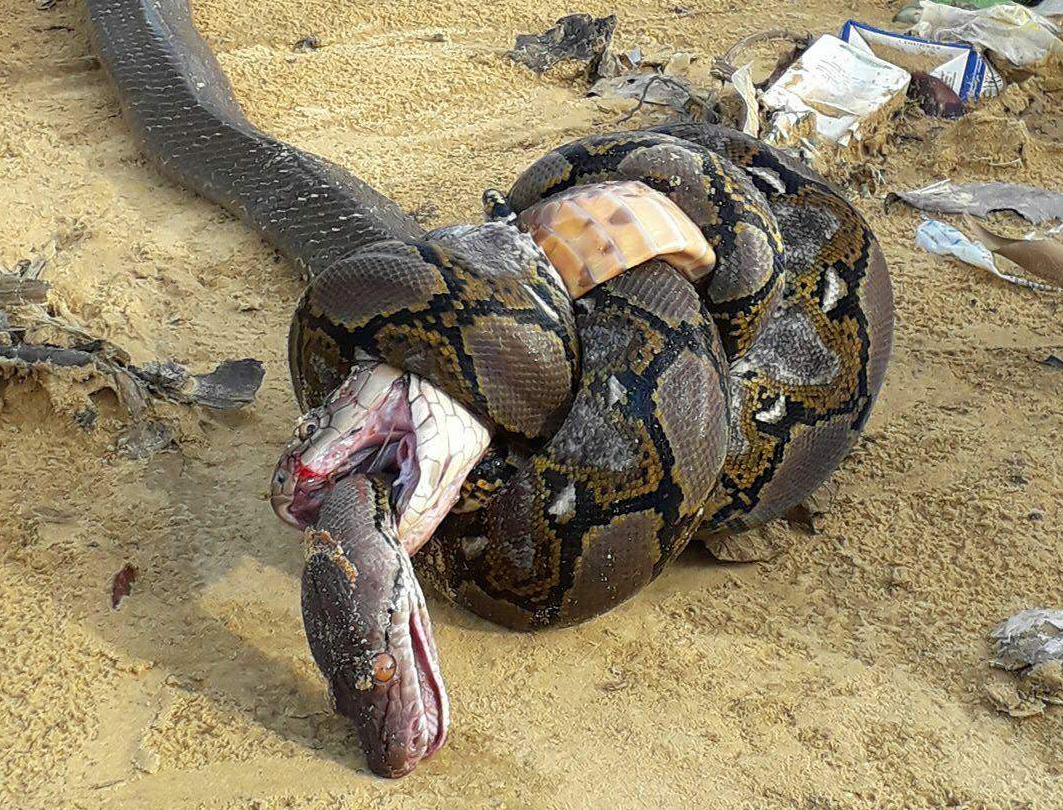 It’s not often that a single photo taken by a seemingly anonymous photographer becomes a subject of interest for scientists, but that seems to exactly what is happening with an image of two of the world’s most dangerous reptiles locked in a deadly embrace. The snakes, a king cobra and a reticulated python, were discovered frozen in time, each having successfully killed their foe at the expense of their own lives.

The photo, which has been spread around social media to the point where it’s unclear exactly what the original source is, doesn’t come with much back story. It appears to have been posted on image sharing site Imgur with a note that the original photographer is unknown. However, there’s a number of things that are apparent simply from knowing how the two snake species hunt.

The king cobra’s primary weapon is its venomous bite. The species is known for biting its prey and, once its toxins have compromised its victim, swallowing it whole. In the photo, the king cobra is the one whose tail stretches towards the top of the photo and has the python caught between its jaws. Reticulated pythons are considered the world’s longest snakes but, unlike the cobra, they are not venomous. However, they use their powerful, muscular bodies to wrap around their prey, cutting off circulation and causing death by limiting blood flow to vital organs. In this case, you can see the python has turned the body of the cobra into a twisted pretzel.

The caption that has been following the image around its very postings claims that the cobra was the aggressor in this fight, and that after being bitten the python strangled its attacker and neither of the combatants made it out alive. This would seem likely, as pythons typically prey on small rodents and other mammals, while the king cobra is known for feasting on snakes. In this case, it seems the cobra bit off more than it could chew.

It’s unclear exactly where the photo was taken, but Coleman Sheehy of the Florida Museum of Natural History told National Geographic that the fight likely took place somewhere in Southeast Asia, where the species are known to overlap.