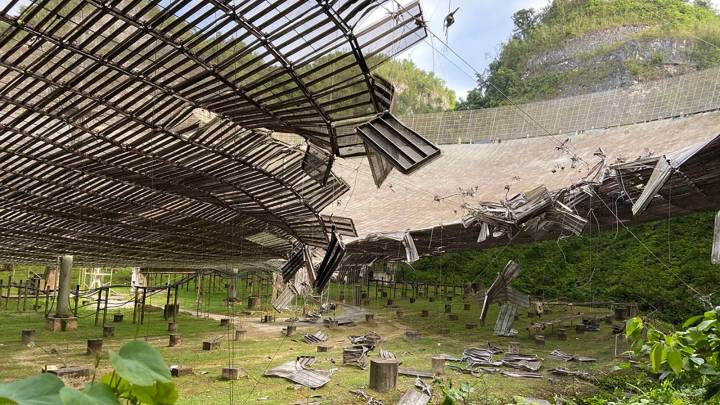 One of the planet’s largest telescopes — the radio telescope at the Arecibo Observatory — is now out of commission after a metal platform support cable snapped, tearing a massive section of the telescope into pieces. The telescope is located in Puerto Rico and is managed by several groups, including the University of Central Florida.

The incident occurred overnight on Monday and damaged “about 6-8 panels in the Gregorian Dome and twisted the platform used to access the dome,” according to UCF. The reason the cable broke is unknown, but the damage it caused is extensive.

Images of the damage show just how serious it is. The massive radio telescope has a huge section missing, and there’s a lot of twisted metal and various pieces scattered around. It’s not good, and will clearly take some time to repair.

“We have a team of experts assessing the situation,” Francisco Cordova, the director of the observatory, said in a statement. “Our focus is assuring the safety of our staff, protecting the facilities and equipment, and restoring the facility to full operations as soon as possible, so it can continue to assist scientists around the world.”

Along with repairing the damage that’s already done, it’s important that the telescope’s operators discover the reason for the cable snap. As the University of Central Florida explains on its blog post about the unfortunate incident, the telescope has endured a lot over the five decades it’s been in operation.

“The facility has endured many hurricanes, tropical storms and earthquakes since it was built 50 years ago,” the university says. “Repairs from Hurricane Maria in 2017 are ongoing.”

Ensuring that something like this doesn’t happen again is obviously a major concern, as the damage this cable snap caused has now shut down the telescope and any observations it was making. That’s a huge blow for the researchers who use the telescope and those who use the data it gathers for various scientific studies and research efforts.

Radio telescopes are different from optical telescopes in that they don’t capture images of the cosmos, but rather detect radio waves that speed through space and routinely reach our planet. By detecting and analyzing these signals and where they originate, scientists can use the data from these telescopes to detect astronomical events happening at extreme distances from Earth.

We’ll be keeping our fingers crossed that the extreme damage to the Arecibo Observatory can be repaired in short order so that it can resume its important scientific work.