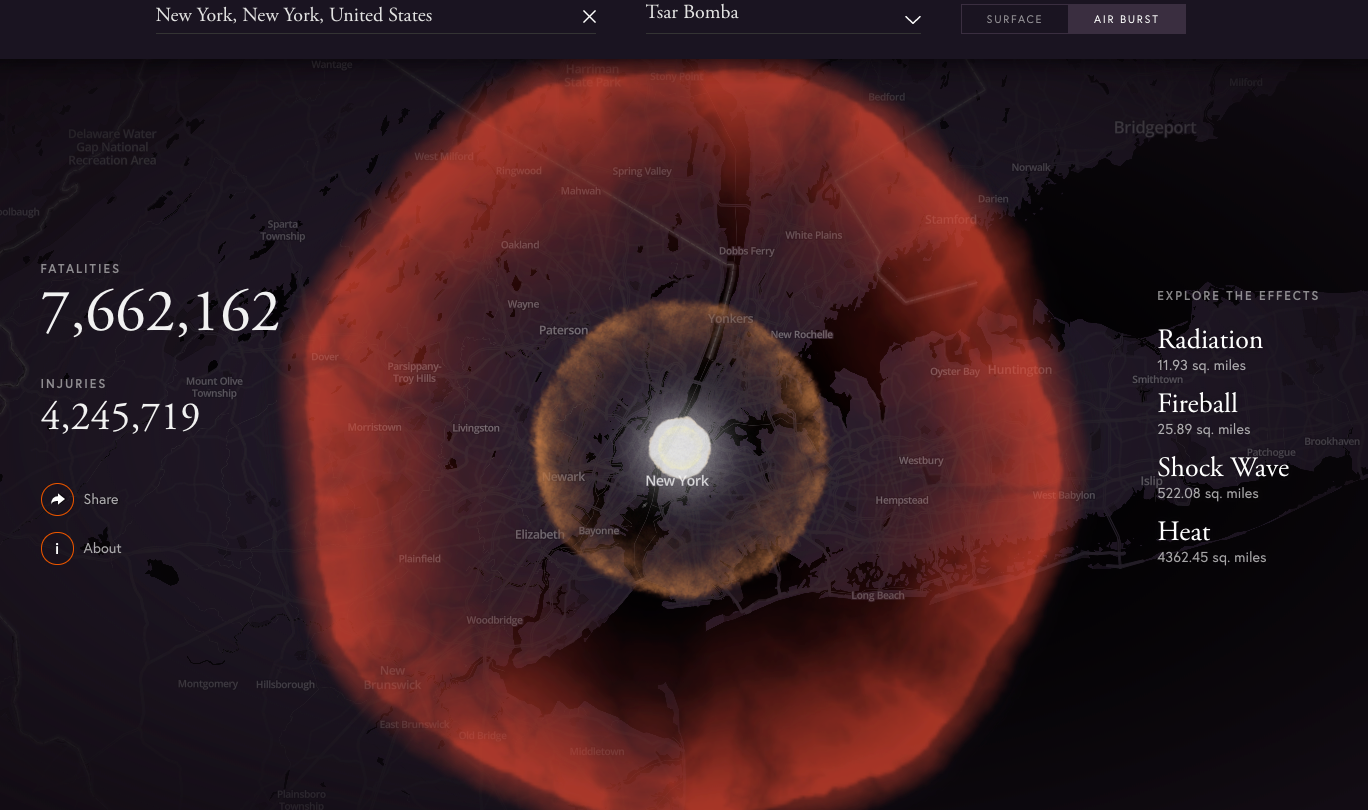 We live in very bizarre times. Nuclear weapons are commonplace, at least insofar as lots of countries have access to them but never actually use them, but tensions between superpowers never seem to go away. The US is in an open war of words with Russia, while North Korea, despite being on its best behavior lately, is still seemingly a threat to just about everyone. The Middle East is in constant unrest, and nobody knows who, if anyone, they can actually trust. With all that in mind, let’s pretend someone launched a nuke at your house.

Outrider.org is an activist group made up of scientists and experts who hope to curb the worldwide nuclear threat through an information campaign. To that end, they’ve created a freely accessible tool to simulate what would happen if a nuclear weapon were dropped on any particular spot on the globe. The result is both fascinating and frightening.

Using the map-based tool, you can type in any location you can think of and watch as the website demonstrates how a nuclear warhead would affect it. You’ll see how far the different aspects of the detonation would reach, including the fireball, radiation, shock wave, and heat. It even provides a tally of the fatalities and injuries likely to result based on how many people live in the area.

You can tweak the settings of the blast and choose one of four bombs ranging from the original “Little Boy” nuke to Russia’s Tsar Bomba, the largest nuclear weapon ever detonated. Depending on where you decide to “drop” it, the amount of damage the explosion causes can be downright absurd. By default, the bomb blast is set to New York City, which would endure over 7.5 million fatalities and another 4.2 million injuries as a result.

Needless to say, it can be a pretty scary thing to simulate a nuclear bomb dropping on your hometown, but that’s kind of the idea here. The group wants to bring the conversation regarding nuclear weapons to the forefront, with the ultimate goal of disarmament. We’re now just two minutes to midnight on the Doomsday Clock, the symbolic countdown to worldwide nuclear catastrophe, and the fate of humanity might rest on our ability to come up with a solution.