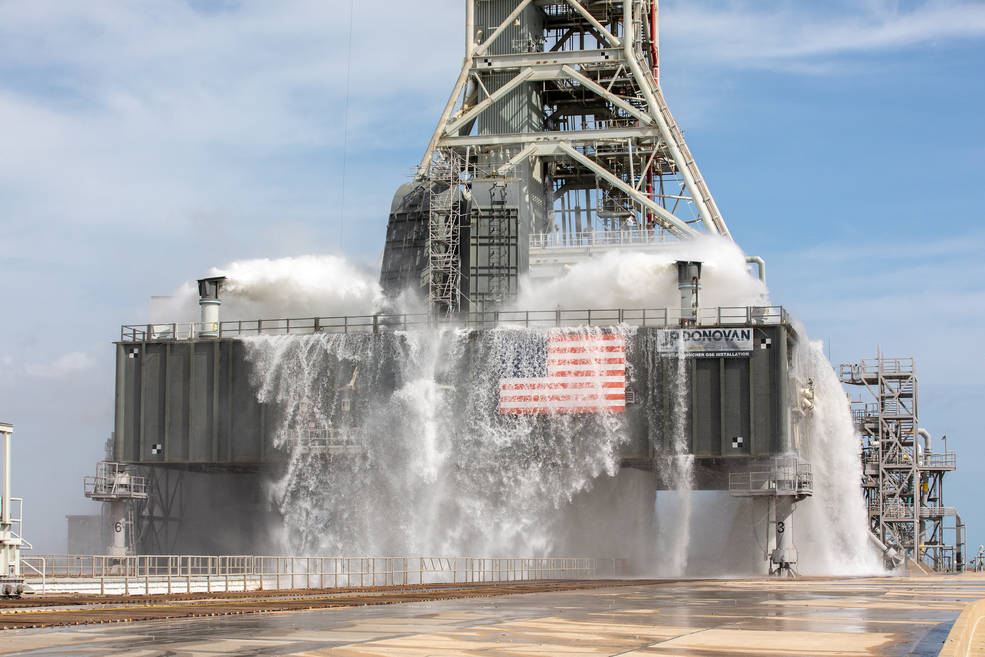 Whenever there’s a high-profile NASA mission on the horizon you can expect to hear about the various tests leading up to an eventual launch. Firing huge rocket engines is cool, and testing new instruments on a rover is pretty exciting, too, but spewing a bunch of water across a launch pad? Well, It’s a little less glamorous, but still needs to be done.

The mobile launch pad for the upcoming Artemis I mission, called Pad 39B, will be the last piece of solid ground that astronauts will stand on before embarking on a mission to the lunar surface. As such, NASA has to ensure that all of its systems are in perfect working order well in advance of the big day, and a recent water flow test shows that things are shaping up nicely.

The test, which lasted just 30 seconds, resulted in some 450,000 gallons of water being dumped onto the parts of the launch pad that will experience the most extreme stresses, including the blast deck and flame deflector. The water flow system has a peak flow rate of over 1 million gallons per minute, aiding in dampening noise and vibrations created by the SLS rocket which will eventually be perched above.

“SLS will create about 176 decibels at liftoff, which is significantly louder than a jetliner,” Nick Moss, Deputy Project Manager for the launchpad, explained in a statement. “The sheets of water created by the flow will curb that sound by knocking it down a few decibels.”

The SLS — or Space Launch System — will be incredibly powerful, but it’s not exactly ready for showtime yet. NASA has been forced to push back the ready date multiple times, and those repeated delays have threatened the timeline of the Artemis mission significantly.

NASA is still planning on having a crewed mission to the Moon ready to go by 2024. Tests like this one show that some aspects of that forecast are reasonable, but NASA meeting the launch deadline mandated by the current administration is anything but certain.