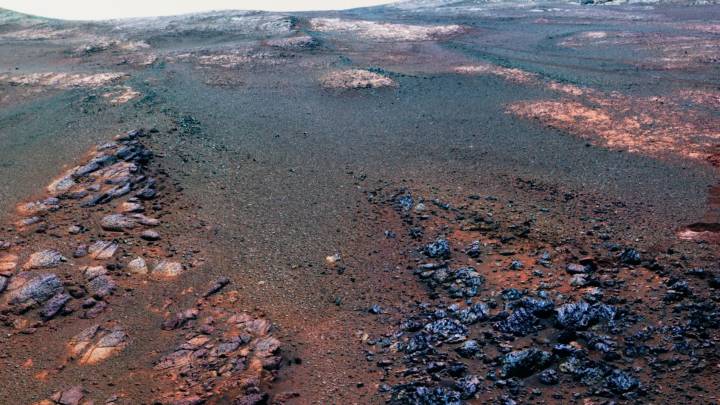 NASA’s Mars Opportunity rover is dead, having been swallowed up and spat out by a colossal dust storm on the planet last year. We’ve said our goodbyes to the trusty rover and dealt with the anguish of losing it, but NASA is back to remind us of the remarkable work that the trusty robot performed while on its mission.

In a new post, NASA reveals what it says is the final “parting shot” that Opportunity captured before the dust storm killed it. It’s a panorama of Mars’ Perseverance Valley, where Opportunity spent plenty of time and ultimately perished.

“This final panorama embodies what made our Opportunity rover such a remarkable mission of exploration and discovery,” John Callas of NASA’s Jet Propulsion Laboratory said in a statement describing the image.

“To the right of center you can see the rim of Endeavor Crater rising in the distance. Just to the left of that, rover tracks begin their descent from over the horizon and weave their way down to geologic features that our scientists wanted to examine up close. And to the far right and left are the bottom of Perseverance Valley and the floor of Endeavour crater, pristine and unexplored, waiting for visits from future explorers.”

NASA also provided an annotated version of the image pointing out the various features that Opportunity captured in the shot. It’s best viewed in full resolution since the image is very wide, so check it out here.

There was little NASA could do to save the Opportunity rover once the dust storm on Mars swallowed nearly the entire planet. The solar-powered rover was cut off from its only source of energy and ultimately its aging batteries couldn’t handle the extended down time. When the light finally returned to the surface after the dust had settled, Opportunity was still silent and would remain that way for months, despite repeated attempts to wake it back up.

The rover may be gone, but its legacy will live on thanks to the wealth of data and observations it made during decade-plus time exploring the Red Planet.