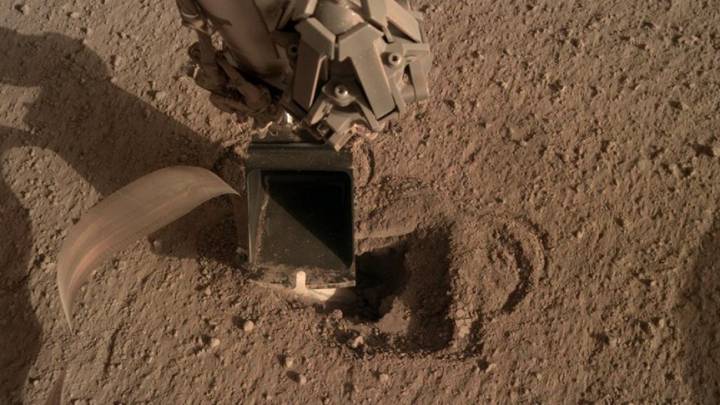 NASA’s Mars InSight lander has been doing some great work on Mars. It’s been functioning as the plant’s first weather station, it’s detected Marsquakes, and taught scientists a lot about what lies just beneath the surface of the planet. Unfortunately, one of its most promising tools — the self-hammering “mole” that is designed to dig into the Martian soil and provide data from depth — has come up well short of expectations.

Now, after many months of experimentation to try to get the mole to do its job, its handlers back on Earth think they may have come up with a solution.

The mole is supposed to hammer itself into the ground. To do that, it relies on friction with the Martian soil to hold it in place as it hammers itself deeper. It wasn’t long after InSight landed on the Red Planet that it became clear the soil was too loose and dusty to allow the mole to dig.

What followed was months of trial and error, with NASA trying different techniques to push the mole deeper into the ground and hopefully, give it the chance to dig deep underground. The lander used its robotic arm to push on the soil around the mole in the hopes of giving it more traction, but that didn’t work. Then, the lander physically pushed the mole into its hole to give it a head start. Mars promptly spat the probe back up onto the surface.

Now, the team has decided to try a new technique that involves filling the hole with new soil to give the mole something to grab onto. They used the lander’s scoop to scrape soil over the hole. As the scientists explain in great detail on the DLR website, the lander’s efforts appear to have paid off, at least in the short term. Recent images of the mole show that it is completely covered by sand and may now finally have a better chance at hammering itself deep beneath the surface.

Ultimately, the mole will have to reach a depth of several feet for any of its data to be worth it. The probe is designed to collect temperature data from beneath the surface, but if it can’t actually dig itself as deep as it needs to go, that data is worthless. We still don’t know for certain whether these latest efforts have “saved” the mole and will allow it to dig, but at least there’s hope.