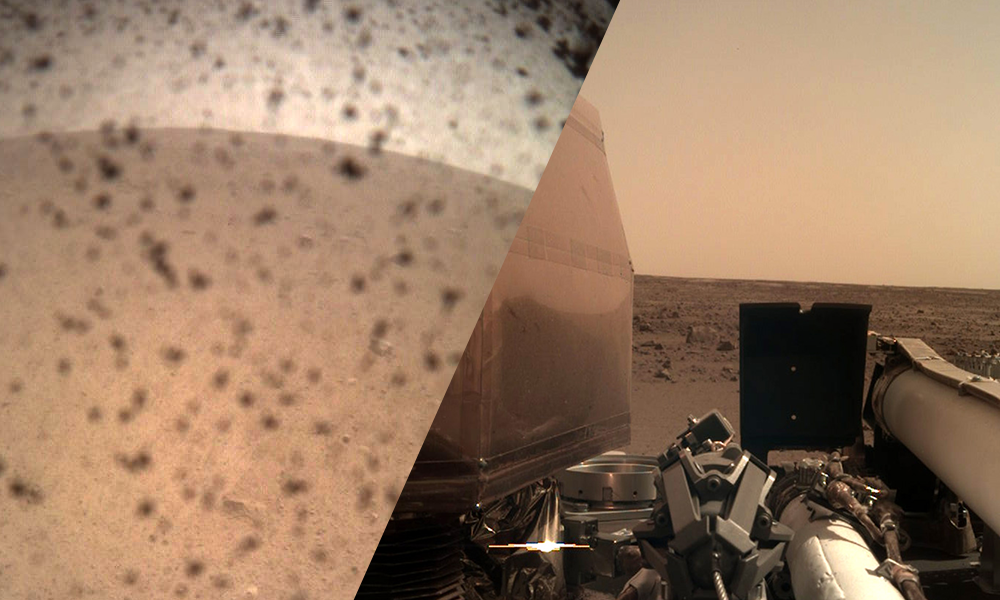 Yesterday was a big day for NASA. The InSight lander which launched early this year finally arrived at Mars and successfully landed on the planet’s surface, and NASA’s Jet Propulsion Laboratory was overjoyed that all their hard work and planning over the past 8+ years had ultimately paid off. Now, with the lander still getting itself ready for the years of work ahead of it, the robot took the time to shoot back its very first photos of its landing site.

The first image, a dust-covered snapshot taken just moments after landing, was difficult to make out but served as a lovely tease for what was to come. The second image, taken from a different camera built into the robot, is a whole lot clearer.

In the minutes following confirmation of a successful landing everyone in JPL mission control was eagerly awaiting the first image from a camera on the lander. It came in the form of this distorted snapshot from the Instrument Context Camera on the robot. The dust and debris you see is actually caked to a lens cover that is removable, and InSight will remove that filter to get clearer shots in the future.

The second, much clearer photo was snapped by the lander’s Instrument Deployment Camera, and while this lens also has a dust cover in place it avoided much of the nastiness that was kicked up during the lander’s touchdown.

As an important first order of business, NASA received messages from InSight confirming that it deployed its solar array in order to begin generating the power its batteries need. Everything appears to be working splendidly, and that’s a huge weight off the shoulders of the InSight team.

“The InSight team can rest a little easier tonight now that we know the spacecraft solar arrays are deployed and recharging the batteries,” InSight project manager Tom Hoffman said in a statement. “It’s been a long day for the team. But tomorrow begins an exciting new chapter for InSight: surface operations and the beginning of the instrument deployment phase.”

InSight’s mission is slated to last two years, so expect lots and lots of new photos and findings from the robot over the next several months.