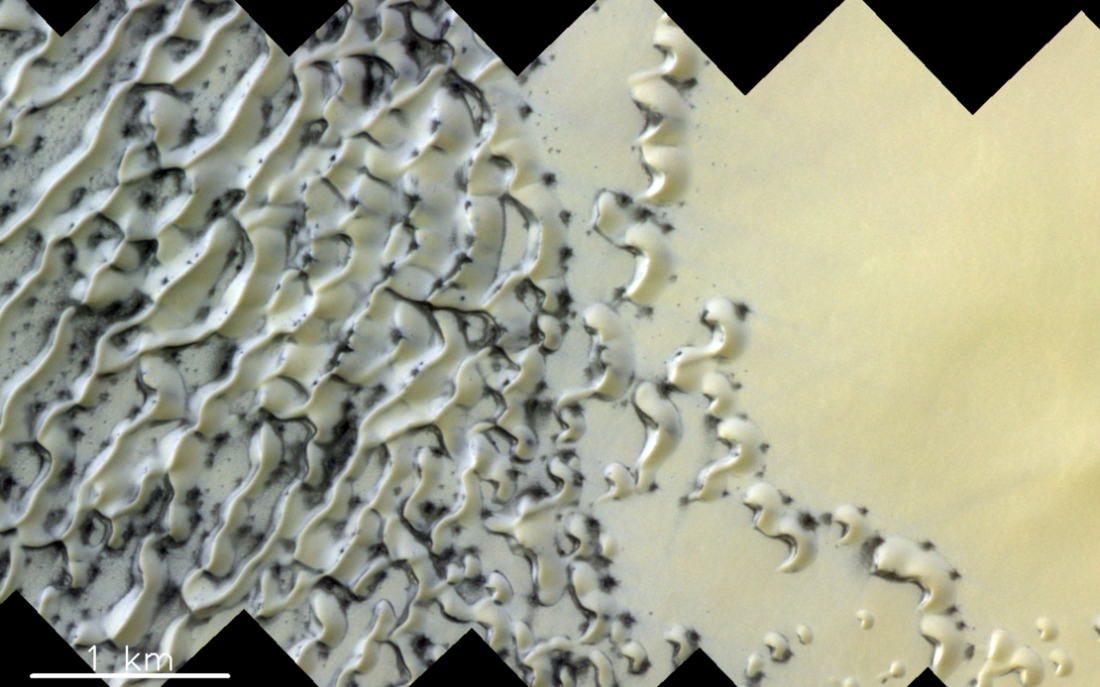 The Mars we often seen in photos from rovers and orbiters is dry, dusty, and barren, but there are parts of the planet that, when viewed separately, could trick you into thinking you’re looking at a totally foreign alien land. The latest snapshot captured by the ExoMars Trace Gas Orbiter fits perfectly into that latter category.

The image was captured using the CaSSIS camera, one of the orbiter’s many instruments, and it shows the frosty dunes that cover the northern region of Mars that is rarely seen up-close. It also definitely looks at least a little bit like cookie-flavored ice cream.

As the European Space Agency explains in a post highlighting the photo, the dark areas are cracks and gaps in the ice that are formed when gas trapped below is released. When the gas breaks free, it carries dust and sand with it, covering the edges of the cracks with the darker material.

Similar to dunes seen on Earth, the flowing shapes that form on the surface of Mars are carved by winds. As ESA explains, the shapes we see in this particular image can tell scientists a lot about the processes happening on the surface:

The image also captures ‘barchan’ dunes – the crescent or U-shaped dunes seen in the right of the image – as they join and merge into barchanoid ridges. The curved tips of the barchan dunes point downwind. The transition from barchan to barchanoid dunes tells us that secondary winds also play a role in shaping the dune field.

Despite the fact that humans are seemingly destined to explore the Red Planet in person sooner rather than later, locations like this probably won’t be first on the list for those early travelers. For now, we’ll just have to enjoy the view from above.