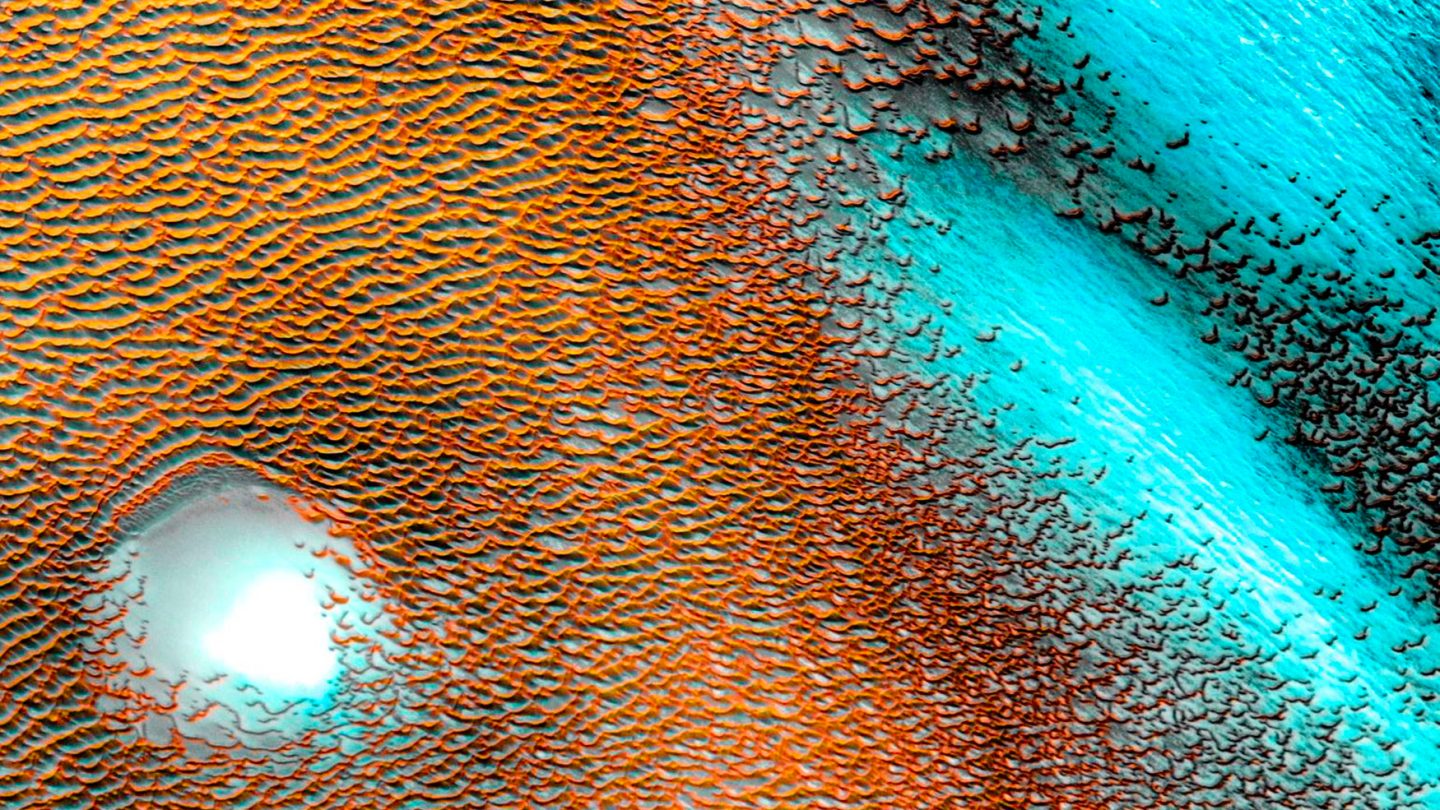 The image you see above is the surface of Mars. I know that’s hard to believe since you normally see Mars in dusty, vaguely orangish hues in photos snapped by NASA’s Mars rovers, but it’s true! This image, by contrast, has some orange along with shades of white and a surprising amount of blue, but how can this be? Well, have a seat dear science fan as we go on a magical journey to the world of false-color images.

What you see here is an image captured by NASA’s Mars Odyssey orbiter. The spacecraft has been cruising around Mars for two decades and is now officially “the longest-working Mars spacecraft in history,” according to the space agency. It’s a lovely little spacecraft but this image of Mars wasn’t captured in color. Instead, the color comes from an algorithm that assigns blue hues to colder temperatures and orange colors to warmer temperatures. This produces a really striking image, but not necessarily an accurate representation of what you’d see if you were looking at this spot on Mars with your own eyes.

The snapshot was taken near the north pole of Mars, which is an area known to be covered in ice. The data returned by the Odyssey orbiter allows NASA scientists to do cool things with the image, including overlaying one kind of image onto another. In this case, it’s a mix of visible light (like we see with our eyes) and infrared image data with which NASA can “paint” the image in whatever way seems to fit the best.

In this case, the orange peeks of the dunes are warmer than the areas which are carved out and are assigned yellow and orange hues, while the cooler spots are given blue tints. This gives the appearance of Earth-like sand dunes covering a bed of ice when in reality the colors aren’t nearly so bold. If you were looking at it from a spacecraft flying overhead you’d mostly just see shades of gray, though the carved dunes would still be visible.

NASA explains in a blog post showcasing the image as part of a celebration of Odyssey’s 20th anniversary:

A sea of dark dunes, sculpted by the wind into long lines, surrounds Mars’ northern polar cap and covers an area as big as Texas. In this false-color image, areas with cooler temperatures are recorded in bluer tints, while warmer features are depicted in yellows and oranges. Thus, the dark, sun-warmed dunes glow with a golden color. This image covers an area 19 miles (30 kilometers) wide.

It’s obviously really cool to see images like this as they show us a side of Mars that we don’t often get to see, but it’s important to keep your imagination grounded, as false-color images don’t always offer an accurate depiction of what really exists.