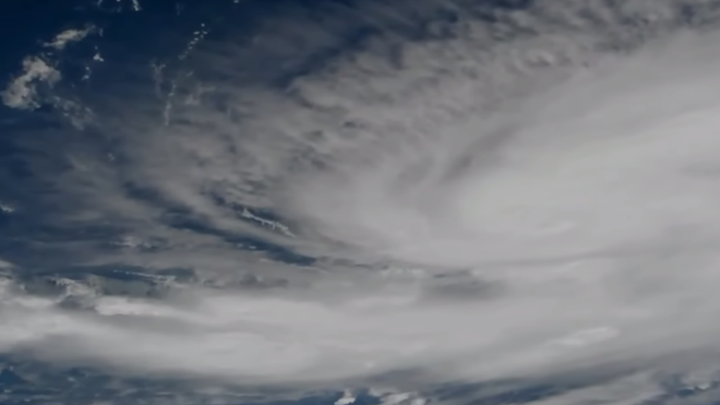 Astronauts aboard the International Space Station don’t typically spend their days checking out weather back on Earth, but when a storm as large as Hurricane Dorian is rolling across the ocean you can’t help but catch a glimpse.

Hurricane Dorian is making its way to the United States, and it’s expected to make landfall sometime early next week. It’s on a path for Florida as we speak, and coastal residents are preparing for the worst, anticipating a state of emergency and widespread damage. From space, however, things seem a lot more serene.

While the International Space Station was cruising around Earth on Thursday, cameras mounted outside the space station were treated to the breathtaking sight of Dorian churning along. Behold:

Like many satellites, the International Space Station orbits Earth multiple times per day. In fact, it completes a full orbit of our planet about once every hour and a half, and completes 16 trips around Earth every day. That puts ISS astronauts in the unique position of being able to see many incredible weather phenomena play out all over the world.

From their perch high above Earth, the astronauts are safe from Dorian’s wrath, but back on the coast of Florida things could get ugly in a hurry. The latest reports on the hurricane suggest it could be a Category 4 storm by the time it touches down on the Florida coastline, and counties in the state are in the process of declaring a state of emergency in order to receive the help they’ll likely need to clean up and repair the damage.

If you’re in the hurricane’s path — or don’t know if you’ll be affected by the storm or not — the National Hurricane Center is a great resource for getting up-to-the-minute information and timely updates on the progress of these devastating storms.