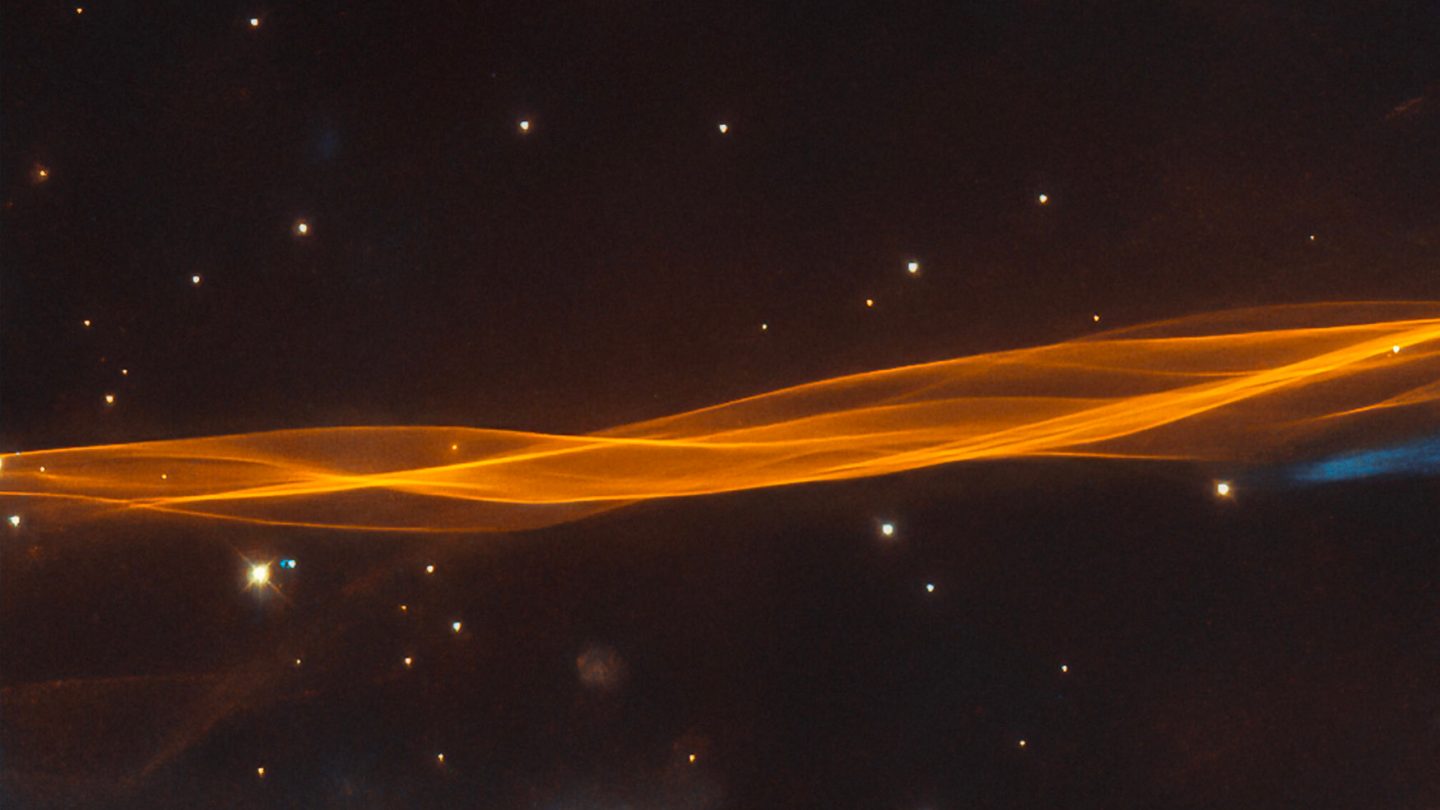 NASA’s Hubble Space Telescope has captured many images that look so incredible you almost can’t believe they’re real. The image above definitely falls into that category, especially because at first glance it’s almost impossible to tell what it is. A delicate orange ribbon drifting through space? That doesn’t really exist… does it? Apparently it does, only it’s not a ribbon, it’s the incredibly powerful blast wave from a dying star.

As NASA explains in a new blog post, what we’re seeing here is really just a fraction of the overall picture. This tiny sliver of the blast wave sits some 2,400 light-years from Earth. That’s a safe enough distance that we’re not in danger, but close enough that Hubble can show us the beautiful, destructive force from afar.

Supernovas occur when stars of certain sizes die. They exhaust their fuel and collapse in on themselves, leading to a massive explosion. The star that created the supernova that produced this particular blast wave was a real monster. NASA estimates that it was around 20 times as massive as our own Sun. The explosion itself occurred somewhere between 10,000 and 20,000 years ago, according to NASA scientists.

“Since then, the remnant has expanded 60 light-years from its center,” NASA explains. “The shockwave marks the outer edge of the supernova remnant and continues to expand at around 220 miles per second. The interaction of the ejected material and the low-density interstellar material swept up by the shockwave forms the distinctive veil-like structure seen in this image.”

The star that went boom is part of the Cygnus constellation. The massive collection of stars takes up 36 times as much room in the night sky as the Moon. That’s big, but it’s not nearly as large as the largest constellations like Hydra and Ursa Major. Nevertheless, you’d have to squint pretty hard to see this blast wave from your back yard. Just kidding, please don’t try to see this. You definitely won’t be able to.

It’s pretty wild to think that the Hubble Space Telescope has been orbiting Earth for over 30 years already, yet continues to return stunning images like the one you see above. Imaging technology has come a long way since the spacecraft was first launched — a few upgrades and some maintenance along the way have kept it tip-top shape — but you have to wonder what incredible things we’ll be able to see once NASA’s James Webb Space Telescope finally takes to the skies… whenever that may be.