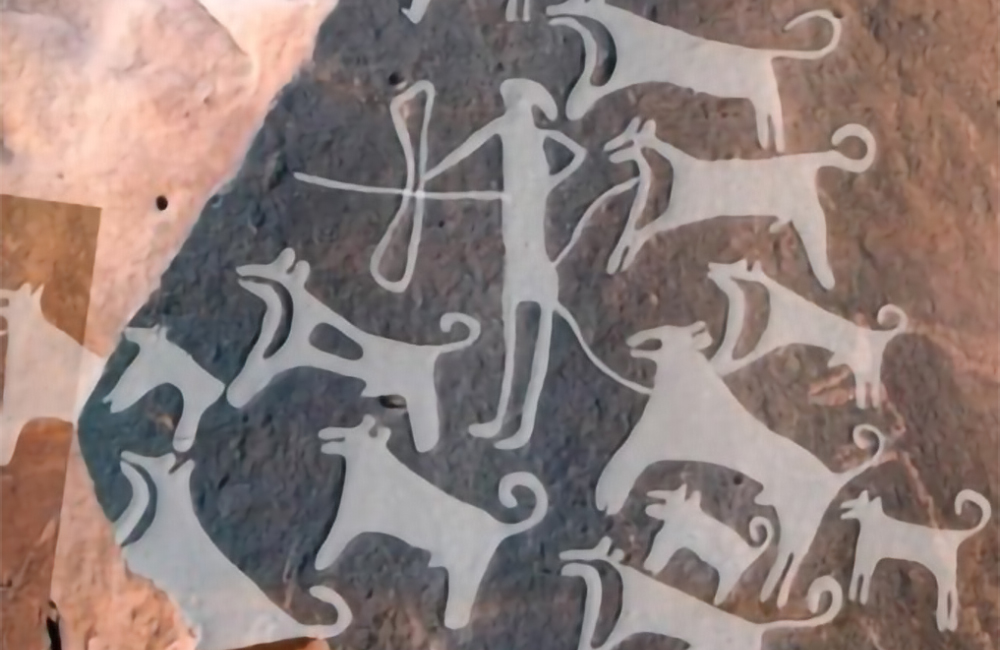 Dogs are such ubiquitous parts of modern life that it’s sometimes easy to forget that man’s best friend wasn’t always by our sides. Humans are thought to have begun domesticating dogs around 15,000 years ago, but evidence of the earliest centuries of the human/canine partnership remains hard to come by. Now, newly discovered stone carvings in Saudi Arabia reveal some interesting tidbits about ancient man’s attempts at canine domestication, and are thought to be some of the very first drawings of very good boys ever etched by humans.

Researchers from the max Planck University and the Saudi Commission for Tourism & National Heritage have been studying the carvings in an attempt to accurately date them. At present, the crude drawings are thought to be around 9,000 years old. The etchings depict hunters with canine companions, and there’s one thing in particular that is especially interesting: the very first possible evidence of dog leashes.

The drawings are very basic, but there’s lots of interesting clues as to the bond already being formed between man and canines at that point in history. The dogs appear to be in command of the man, who is readying his bow to fire, and the fact that many of the dogs is drawn with their own unique markings suggests that these were indeed pets. The dogs’ curled tails and perky ears leave no mistake that these are domestic canines.

The man depicted in the carvings has two strings leading from his waist to the necks of two of the nearby dogs. Scientists have taken this as possible evidence of the use of leashes, and if that is indeed what it is, it would predate all other known examples of dog leash use by a significant margin.

The researchers have theorized that leashes may have been used to train new dogs or potentially even keep a closer eye on particularly valuable dogs that the hunters wanted to protect at all costs. We likely won’t ever know exactly what the puppers’ names were, or how many of them enjoyed belly rubs (probably all of them), but we can be sure beyond a shadow of a doubt that they were all very good boys.