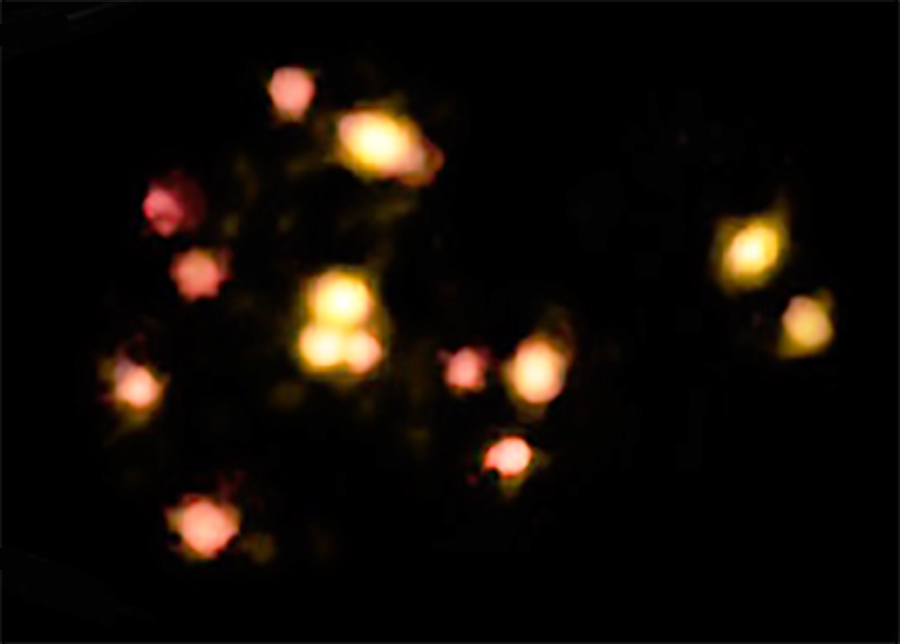 The blurry, confusing image you see above might not seem all that interesting at first glance, but it’s actually an incredible glimpse into the early days of the universe. What you’re looking at is 14 individual galaxies on a collision course with each other. The resulting mass of stars and and planets that will form from these huge bodies will be almost unimaginably large. I say that in the future tense, but in reality the huge galaxy cluster that resulted from this incredible crash already happened a long, long time ago.

Astronomers captured this image using the Atacama Large Millimeter/submillimeter Array in Chile, and the galaxies you see are so far away that the light that we’re seeing from them today was actually produced over 12 billion years ago. At that point, the universe was only 1.4 billion years old, and whatever massive conglomeration that the galaxies ended up creating has existed for billions and billions of years already.

By looking at far-off objects, astronomers can essentially look back in time, seeing what galaxies and star clusters looked like millions, or in this case billions, of years ago. The “cosmic pileup” that the researchers were able to observe in this particular case may be one of many waiting to be discovered.

“How this assembly of galaxies got so big so fast is a mystery,” says Tim Miller of Yale University, the lead author of a paper on the findings which was published in Nature. “It wasn’t built up gradually over billions of years, as astronomers might expect. This discovery provides a great opportunity to study how massive galaxies came together to build enormous galaxy clusters.”

All previous models of how the universe evolved over time suggest that huge collection of galaxies like this should only have formed much later, and certainly not as early as 1.4 billion years after the big bang. Explaining exactly how such a huge cluster could have even existed at that point in time will be the next challenge for researchers. For now, however, we can enjoy the fact that that modern technology has delivered such a stunning window into the universe’s past.