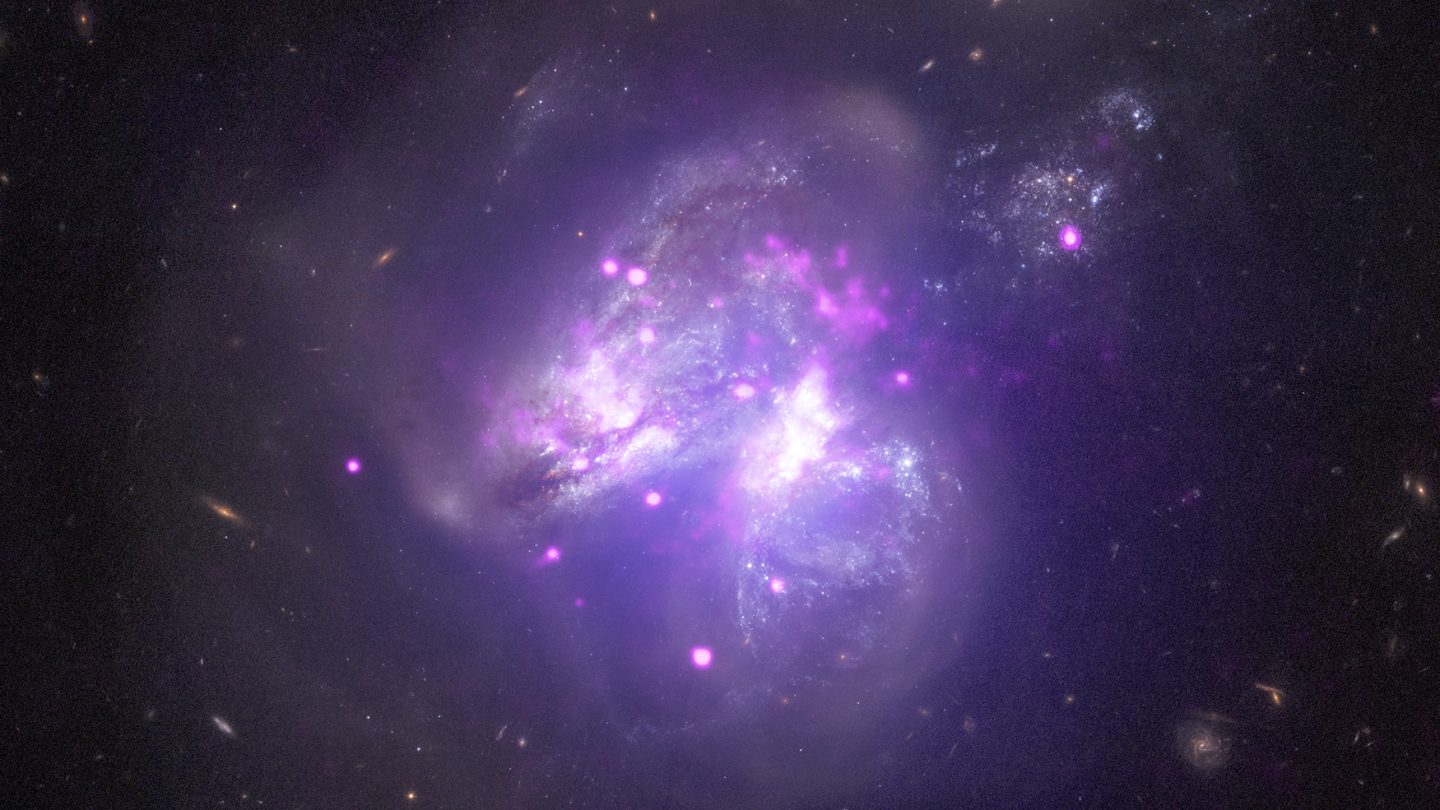 The Milky Way is our home, and for the entirety of human existence, it has treated us pretty well. Earth and our solar system just kinda chill out here in one of the galaxy’s curvy arms, living our day-to-day lives in relative peace, at least in cosmic terms. Fast forward 4.5 billion years, however, and we might begin to see the galaxy change. It’s at that point that The Milky Way is predicted to begin colliding with the nearby galaxy Andromeda.

If a collision between two galaxies sounds pretty wild, well, it is. And thankfully for us, we don’t have to wait 4.5 billion years to actually see it in action. The galactic system called Arp 299 is made up of two galaxies in the middle of a merger, and NASA used its Chandra X-Ray Observatory in conjunction with the Hubble Space Telescope to capture images of the cosmic shakeup that are truly jaw-dropping.

As NASA explains in a new blog post, Arp 299 is a unique combination of two galaxies that have been merging for a while. The speed at which galaxies move through space in respect to other objects can vary dramatically — Andromeda is moving toward The Milky Way at a speed of nearly 70 miles per second, based on the best data we have — but even when the galaxies are moving very fast on paper, their sheer size means that it may take hundreds of millions or even billions of years for a merger to occur.

In the case of Arp 299, we’d have no way of knowing exactly when the collision first happened or how long the merger has been ongoing. The system sits roughly 134 million light-years from Earth, so our observations of the event are 134 million years delayed. The two galaxies have certainly been colliding for the entirety of human history and perhaps even as long as life has existed on our planet.

Scientists have varied estimates about how long it takes for galaxies to merge once a collision begins. There are many factors that can alter the timeline, including the size of the galaxies involved and the angle at which the two galaxies meet. Estimates vary, but it’s widely accepted that the process takes at least a few billion years, and perhaps much longer depending on conditions.

What’s perhaps most interesting about galactic mergers is that, while sounding very scary, it’s unlikely that individual stars within these systems will actually collide. Some may affect one another due to gravity, but in general, the stars and planets remain largely unaffected, even in the long term.

In the case of Andromeda and The Milky Way, our solar system and Sun will likely survive the ordeal unscathed. However, by that point in the Sun’s life cycle, it will have become so hot that Earth’s oceans will have long boiled away, leaving no life on Earth. The planet might still be here at that point, but we as a species definitely won’t be.