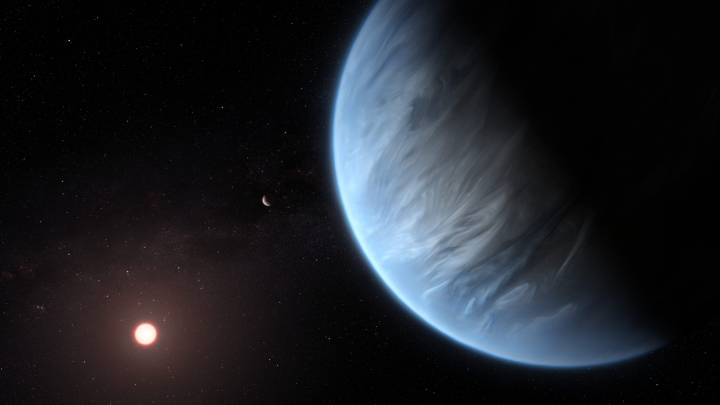 In the ongoing search for life beyond Earth, astronomers studying distant exoplanets are looking for a few key ingredients. For starters, a planet has to be close enough to its host star to receive sufficient heat, but far enough away that it’s not boiling hot. Second, and equally as important, is the presence of water, which, as far as we know, is vital to all life.

Most of the exoplanets scientists spot are either too hot or too cold, or are big balls of gas with no clear surface. K2-18b is different, and observations from the Hubble Space Telescope suggest that it’s not only at the right distance from its star, but it actually has water vapor in its atmosphere. This is huge.

K2-18b resides in what is believed to be the habitable zone of its star, but aside from that, the world appears quite a bit different than Earth. It’s a rocky planet, like our own, but it’s significantly larger, with roughly eight times the mass. As a result, the planet has a more intense gravitational pull.

Water, a reasonable temperature, and a suitable atmosphere are the three things scientists look for above all else in the search for potentially habitable worlds. However, there are still some serious questions about K2-18b, including whether or not its particularly intense red dwarf star has battered the planet with too much radiation to allow life to take root.

At a distance from Earth of around 110 light-years, it’s closer than many sights in the night sky, but still way too far away for us to do anything but gaze longingly at it. As astronomers continue to look for potentially habitable worlds, we’ll continue to learn more about what it means to be truly “Earth-like,” but in the meantime, K2-18b is a closer match than most.