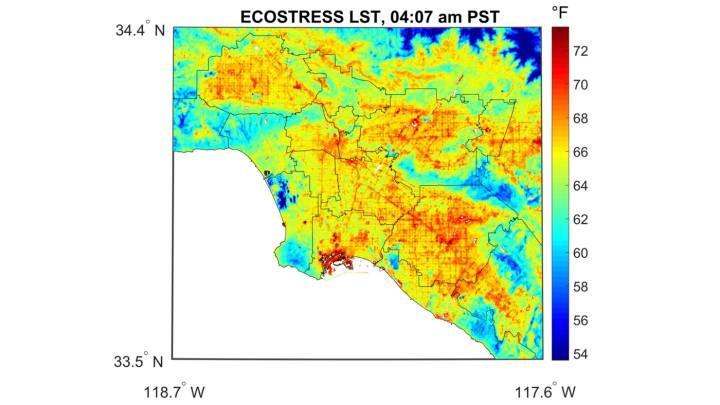 Southern California is usually a pretty comfortable place, temperature wise, but you’d never know it when you find yourself stuck in a traffic jam on a packed freeway. NASA’s powerful new ECOSTRESS instrument installed on the International Space Station can generate incredibly detailed heat maps of whatever it’s pointed at, and NASA just pointed it at Los Angeles.

The map, which differentiates the temperatures it detects using a rainbow color pattern, paints LA as a pleasant oasis punctuated by grueling stretches of pavement, which is a pretty accurate way of describing the city in general.

The image you see above was taken very early in the morning, at a time when the Sun hasn’t yet had a chance to really do its work. Subsequent images from later in the day, especially the shot from 3:01 pm, show just how incredibly hot the most popular areas of the city can get.

“The Los Angeles area is known for its Mediterranean climate and abundant sunshine but also for its extreme “micro-climate” temperature swings — from cooler coastal areas to much warmer inland regions like the San Gabriel Valley,” NASA explains in a blog post. “ECOSTRESS can detect the distribution and pattern variations of that surface heat over areas the size of a football field.”

The ECOSTRESS system — which is short for “ECOsystem Spaceborne Thermal Radiometer Experiment on Space Station” — was built to allow scientists to measure the temperature stresses on plants around the world. Temperatures of foliage can be a great indicator of how healthy plant life is. It can help experts form plans to deal with droughts and heat waves, and in this case it shows that central LA is a hellish volcano not fit for human life. But you knew that already.