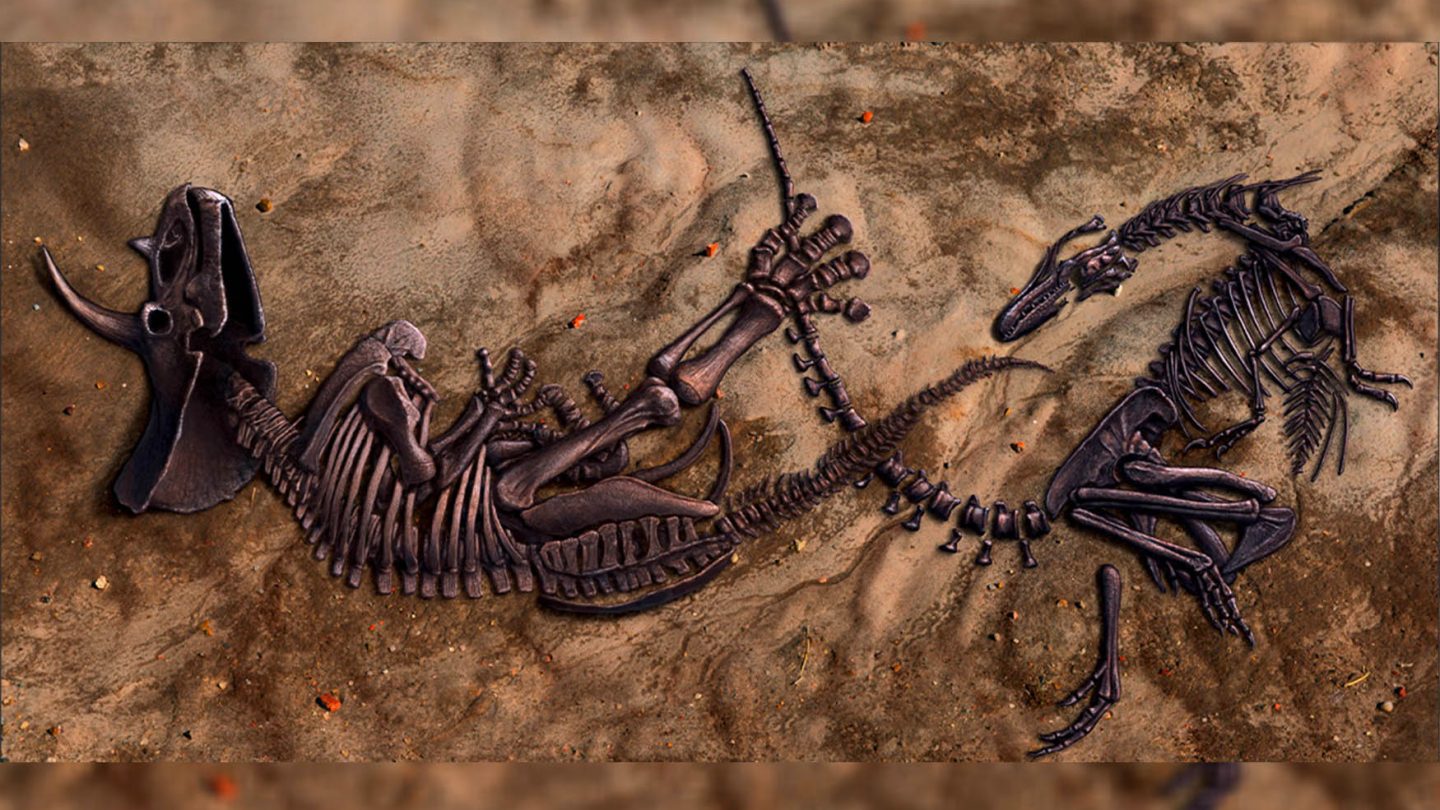 Finding high-quality fossils isn’t easy. Finding complete examples of ancient creatures is more difficult still, and finding evidence of conflict between two dinosaur species? Well, that’s usually nothing more than a pipe dream. That is, until a long-dead Triceratops began to emerge from thick rock in the Hell Creek Formation in Montana. Now, the Triceratops and its fellow combatant — a juvenile Tyrannosaurus rex — are two of the biggest stars in the history of paleontology.

The so-called “Dueling Dinosaurs” are being prepared for their eventual public display at the North Carolina Museum of Natural Sciences, but they won’t be available for visiting until 2022. In the meantime, however, there’s still plenty we can learn about these two incredible animals and the battle that claimed both of their lives.

The dual dinosaurs died and were fossilized right next to one another, and their bones even overlap each other in their rocky grave. The remains of both animals show signs of damage, suggesting that they were indeed fighting to the death and, well, it looks like both of them lost. They were buried in sediment and fossilized so well that the T. rex specimen is believed to be the only 100% complete Tyrannosaurus rex specimen ever to be recovered. That’s pretty special all on its own, but the fact that it’s part of what appears to be a battle to the death, frozen in time, makes it all the more incredible.

The remarkable preservation of the fossils will allow researchers to reveal some secrets that have never been revealed before. As the teaser website for the dueling dinosaurs hints at, the researchers believe they’ll be able to tell what the frill of a Triceratops looks like, whether the young Tyrannosaur had feathers, and, of course, whether or not they were actually fighting when they both died.

If it is determined that the dinosaurs really did mortally wound each other, this discovery may end up being one of the most iconic fossil finds in the history of paleontology. Imagine the odds of such a thing even happening. We don’t know how common it was for the two species to face off in battle —despite what we’ve seen in the Jurassic Park movies — but take those odds, multiply it by the slim chance of a dual-knockout, and then combine that with the likelihood that the two dinosaurs would be fossilized in such incredible condition and, well, let’s just say this kind of thing never happens… until it did.