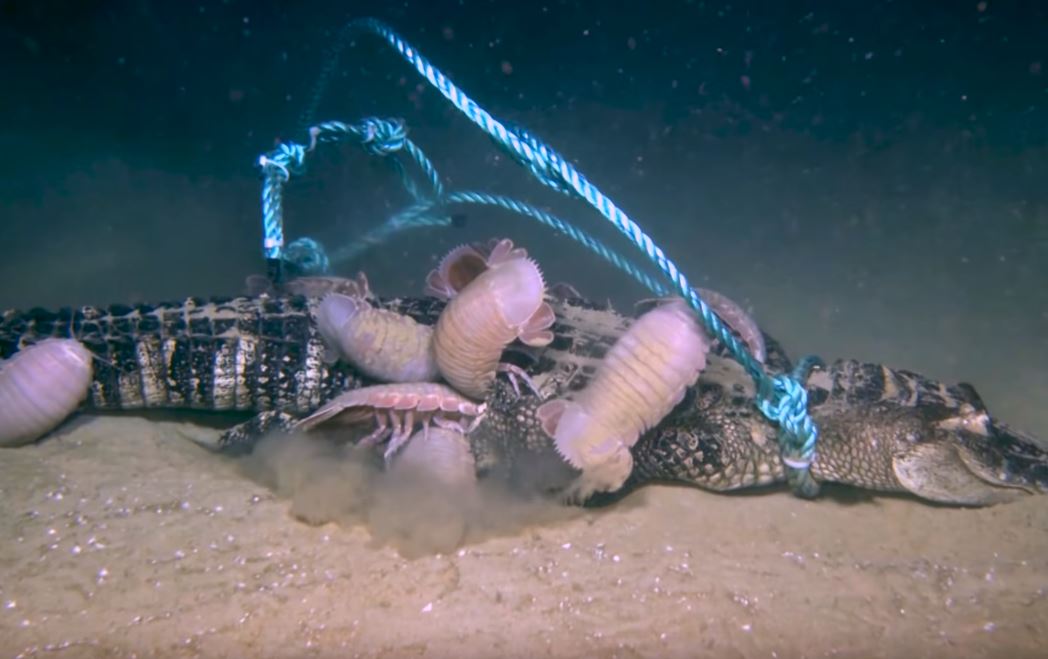 When an animal dies in a forest or field its body usually becomes food for scavengers large and small. Sometimes that includes larger animals like vultures or wild dogs, but it’s usually insects that are left to clean up the last bits of tissue. The bottom of the sea is no different and, as a new video from the Gulf of Mexico reveals, there’s always something waiting for a free meal.

Scientists from LUMCON were studying the effects of “food falls” in the sea, providing marine scavengers with a feast by dropping dead alligators into the Gulf and then observing the results. The video they captured is equal parts science and nightmare fuel.

In the video, you see an alligator carcass that was dropped over a mile onto the sea floor below, tens of miles off the coast of Mexico. It took just a day for deep sea scavengers to find it, and soon the alligator’s lifeless body was covered in large pill-bug-like creatures called isopods.

They’re related to the tiny pill bugs we’re all familiar with, but they’re many times larger. As the video explains, they’re about as big as a football, and it’s clear they’re very interested in making a meal out of the fallen reptile. The researchers note that they were surprised at how quickly the isopods caught the scent of the dead animal, assuming it would take several days for scavengers to find the corpse when in reality it was more like hours.

The video is not for the squeamish. The isopods tear right through the leathery hide of the alligator and dive right into its guts, eating it from the inside out. The creatures eat so much that some of them lose their coordination, bouncing sideways and face-first along the sea floor as they try to leave the area.

It’s an interesting look at what goes on deep below the waves in places that humans would never see without the help of technology. Sure, it might give you nightmares for a week, but it’s probably worth it.