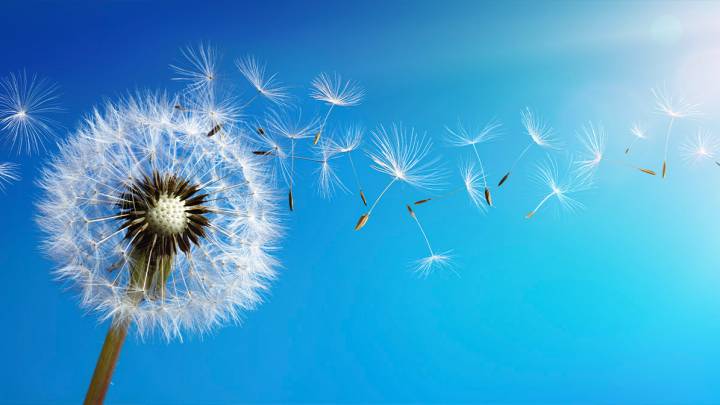 As the warm summer months creep nearer and spring flowers begin to bloom, many of us will find some less welcome blossoms on our lawns. Dandelions are one of the most troublesome weeds, and anyone that’s tended to a yard can tell you that they spread remarkably fast. The plants have a genius way of advancing their species and there’s a good chance you loved them as a kid. The seedy tufts that form from the plants spread seeds across a wide area when a brisk breeze passes through, and a new study published in the journal Nature reveals that the seeds are so much more than just little parachutes.

In the study, researchers from the University of Edinburgh examined the behavior of the seeds and tried to determine how they can stay aloft for such a long time. It doesn’t take much to get a dandelion seed to flutter along for a considerable distance, and the study reveals that the bristles attached to each tiny seed utilize a type of flight never before recorded in nature.

Dandelion seeds can fly for incredible distances despite the fact that their tiny parachute-like bristles are broken up by large empty spaces. This kind of shape doesn’t seem like it would be good for catching air, as most of the air should just pass through it, but the researchers found that the bristles actually create a very special air bubble of their own.

When air passes by, a ring-shaped air bubble now called the “separated vortex ring” is generated in the space around the parachute-shaped bristles. It’s significant enough that it increases the drag on each seed, allowing wind to catch the seeds and carry them for long distances.

“This newly found form of air bubble – which the scientists have named the separated vortex ring – is physically detached from the bristles and is stabilized by air flowing through it,” a press release accompanying the new paper explains. “The amount of air flowing through, which is critical for keeping the bubble stable and directly above the seed in flight, is precisely controlled by the spacing of the bristles. This flight mechanism of the bristly parachute underpins the seeds’ steady flight.”

If that sounds like some kind of magic, it basically is. In fact, the researchers say that the wind-catching power of the gapped bristles is actually four times as efficient as modern parachute designs. That’s downright wild.

“Taking a closer look at the ingenious structures in nature – like the dandelion’s parachute – can reveal novel insights,” Dr. Cathal Cummins of the University of Edinburgh said in a statement. “We found a natural solution for flight that minimizes the material and energy costs, which can be applied to engineering of sustainable technology.”