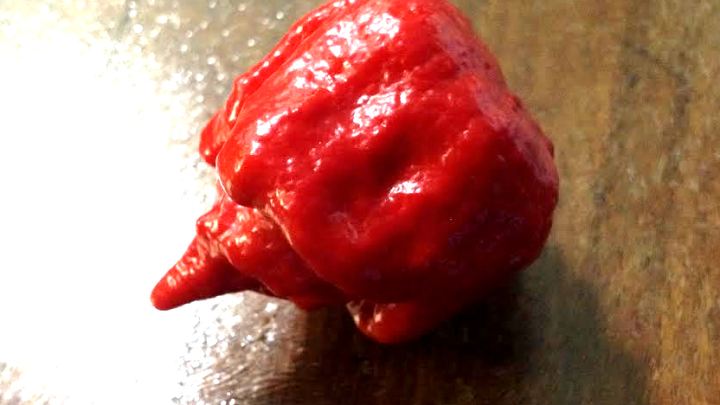 Depending on who you are and your tolerance for hot foods, eating a super hot pepper can either be a briefly painful but overall enjoyable experience, or it can make you hate your life for a while. For one 34-year-old man, taking on the famed Carolina Reaper — the world’s hottest pepper, according to the Guinness Book of World Records — resulted in something far, far worse.

The man was taking part in a pepper eating contest when he consumed the incredibly hot veggie, and it wasn’t long before things started to go south. He began dry heaving, which isn’t exactly uncommon in the world of hot pepper eating, but soon felt a sharp pain in his neck which eventually took over his entire head. He was experiencing what is known as a “thunderclap headache,” and the pepper wasn’t done with him yet.

The man’s case, which was reported in BMJ Case Reports, describes the truly hellish week that followed. For several days following his eating of the Reaper, the man experienced several additional thunderclap headaches, which are characterized by intense pain that dissipates quickly but can occur without warning. Eventually, the man sought medical help, heading to the emergency room to see what could be done.

As Gizmodo notes, a brain scan performed by the doctors revealed narrowing of some arteries. The condition, called reversible cerebral vasoconstriction syndrome (or RCVS for short), is not typically associated with the consumption of hot peppers, but the capsaicin which produces the spicy sensation has been demonstrated to affect blood vessels. It is thought that the super hot pepper somehow brought about a brief spell of the syndrome, though this would be the first documented case of such a thing occurring in a patient. The man’s headaches eventually subsided and a brain scan taken over a month later revealed his arteries had returned to their normal size.

The Carolina Reaper is officially the world’s hottest pepper, but unofficially it’s already been dethroned. Hot pepper breeder and possible mad scientist “Smokin'” Ed Currie, the man who created the Carolina Reaper, has already released a successor called simply Pepper X. Currie states that Pepper X is up to twice as hot as a Carolina Reaper, though this claim has yet to be verified by Guinness.