The black hole that scientists believe sits at the center of the Milky Way galaxy doesn’t cause us much trouble here on Earth. As NASA’s Chandra X-Ray Observatory recently discovered, the same can’t be said for the distant Ophiuchus galaxy cluster, a massive galaxy that is home to a very powerful black hole.

The cluster, which is located around 390 million light-years from Earth, was devastated when its beefy black hole caused a colossal explosion. The blast was so mighty that it actually blew a hole straight through the cluster, destroying countless stars and, presumably, planets, moons, and other objects in the process.

The black hole that astronomers believe is the culprit beamed devastating jets so powerful that it carved away everything in its path. The explosion, which scientists say is the largest ever spotted in space, was so huge that it may be hard to wrap your head around. To give you some perspective, the cavity that the blast carved in the cluster is so huge it could hold 15 Milky Way-sized galaxies side by side. Yeah, it’s gigantic. 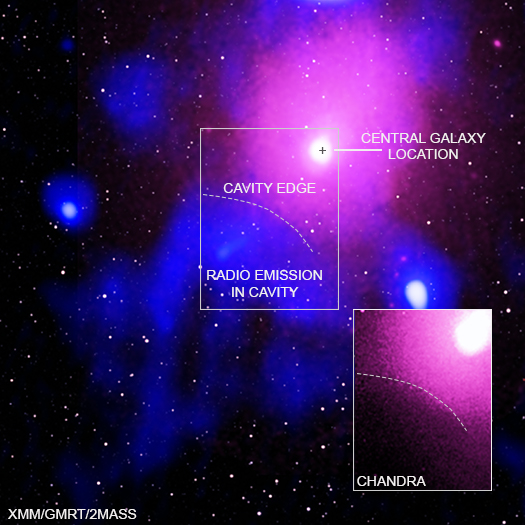 The huge distance between Earth and the galaxy cluster makes it hard for scientists to get a clear picture of exactly what it looks like now, but by combining data from the Chandra X-ray Observatory, the European Space Agency’s XMM-Newton, the Giant Metrewave Telescope, and the Murchison Widefield Array, they have been able to suss out how things unfolded.

“One interesting aspect of the Ophiuchus observations is that the densest and coolest gas seen in X-rays is located about 6,500 light years to the north of the central galaxy,” the researchers explain. “If this gas shifted away from the galaxy it would have deprived the black hole of fuel for its growth, turning off the jets. This gas displacement is likely caused by ‘sloshing’ of the gas around the middle of the cluster, like wine sloshing around in a glass. Usually the merger of two galaxy clusters triggers such sloshing, but here it could have been set off by the eruption.”

It’s both interesting and frightening to consider the fate of the stars and planets in the path of the all-powerful jets that the black hole produced. If anything was living there, it’s long gone now, and from our distant vantage point, it’s impossible to know just how many stars and worlds were wiped out of existence by this one, singular event. Let’s keep our fingers crossed that our own black hole doesn’t have such a spicy personality.