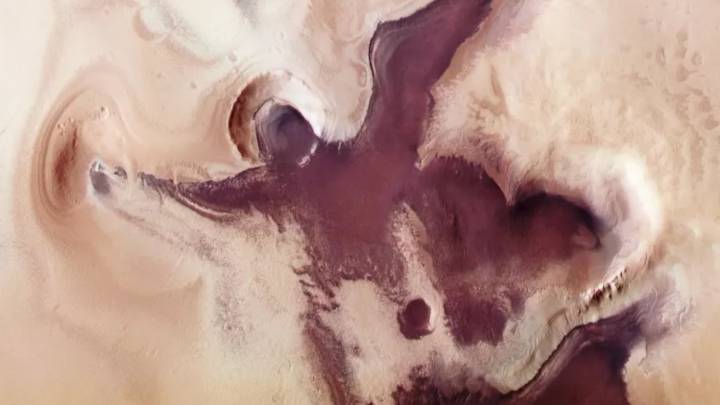 It’s the holiday season in many countries here on Earth, and if you lean toward the religious meanings of various dates on the calendar you’re probably familiar with seeing angels associated with these events. Based on new images released by the European Space Agency, it looks like Mars decided to play along this year, with various forces carving out shapes near the planet’s south pole that look a whole lot like an angel and a bold red heart.

Researchers are studying the interesting shapes not because they look like something you might see on a holiday mural here on Earth, but because of the interesting events that made them possible. Of course, if you’re in the holiday mood, you can just imagine that Mars decorated for us.

So what exactly caused these shapes to form? Well, it’s actually kind of complicated. The large “halo” around the angel’s head is actually an impact crater that formed the head and spread a cascade of material to the surrounding area. Meanwhile, some of the other lower regions are the result of ice turning to gas, forming a depression.

The ‘angel’ and ‘heart’ are both composed of various interesting features. Firstly, the angel’s hand, seen as if reaching to the left, is thought to be a large sublimation pit, a type of feature that forms as ice turns to gas and leaves empty pockets and depressions in the planetary surface (a process that often occurs as the seasons change). Sublimation pits have been seen on other planets in the Solar System, such as Pluto, and can also be seen scattered across the terrain to the right.

Far from being the dry, dusty wasteland that scientists once assumed, Mars has proved to have dynamic weather in many of its regions, with water ice and salty liquid water near its poles. If the theory that Mars once had a wealth of water holds, well, water, then it’s possible that life existed there for a long time. Unfortunately, it’s also possible that Mars was a rocky, watery world that never got all the ingredients it needed for life to form.

Future missions, including NASA’s Perseverance rover which is currently on the way to Mars, could shine a light on the history (or lack thereof) of life on Mars, but for the moment at least we know there’s a heart and an angel there.