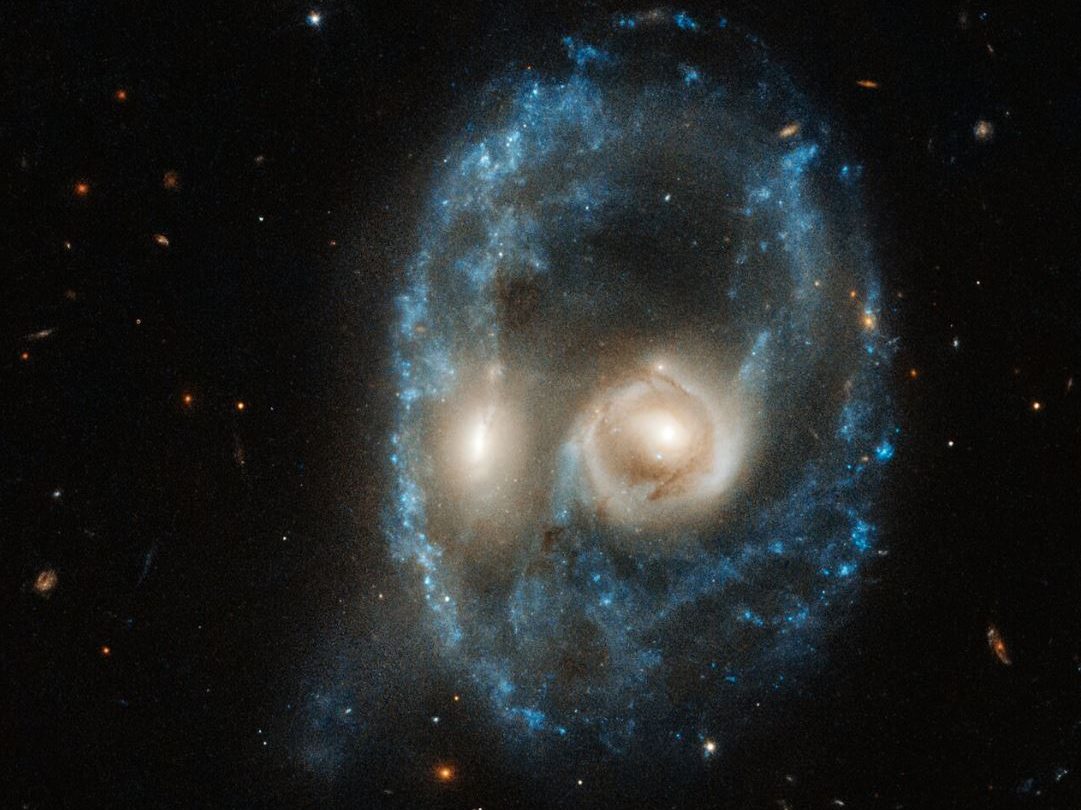 If science fiction flicks have taught us anything, it’s that when we eventually find an ultra-intelligent alien civilization they’re going to have big, oval-shaped heads and huge bulging eyes. When you think of aliens, it’s an image that immediately pops into your mind, and the Hubble Space Telescope just spotted something that looks eerily similar.

Hubble peered deep into space and there, sitting 704 million light-years from Earth, is a creepy face glaring at the rest of the cosmos. It’s bizarre and awesome, and its existence tells the story of a colossal collision between two galaxies a long, long time ago.

The galaxy system is labeled Arp-Madore 2026-424, but what it lacks in a flashy name it more than makes up for with its alien-like appearance. The “eyes” of the alien are the hearts of two galaxies which got a little too close for comfort, eventually resulting in a galactic collision that formed the vast star-forming ring structure that appears blue in the image.

There in the haze of gas and dust, new stars are being born. The two galaxies are still merging from our point of view, but eventually, they will become one, settling into a more stable orientation and enjoying the burst of newborn stars.

The side-by-side juxtaposition of the two central bulges of stars from the galaxies that we see here is also unusual. Since the bulges that form the “eyes” appear to be the same size, we can be sure that the two galaxies involved in the crash were of equal size. This is different from the more common collisions in which small galaxies are gobbled up by their larger neighbours.

Because we’re so far away, it’s likely that the galaxy system looks a lot different today, but we’re seeing it as it existed 704 million years ago.

Galaxy collisions are incredibly interesting events to observe, and a similar collision will inevitably hit closer to home. At some point in the distant future, our own Milky Way galaxy will collide with the neighboring Andromeda galaxy, but we have a few billion years before we have to worry about that.