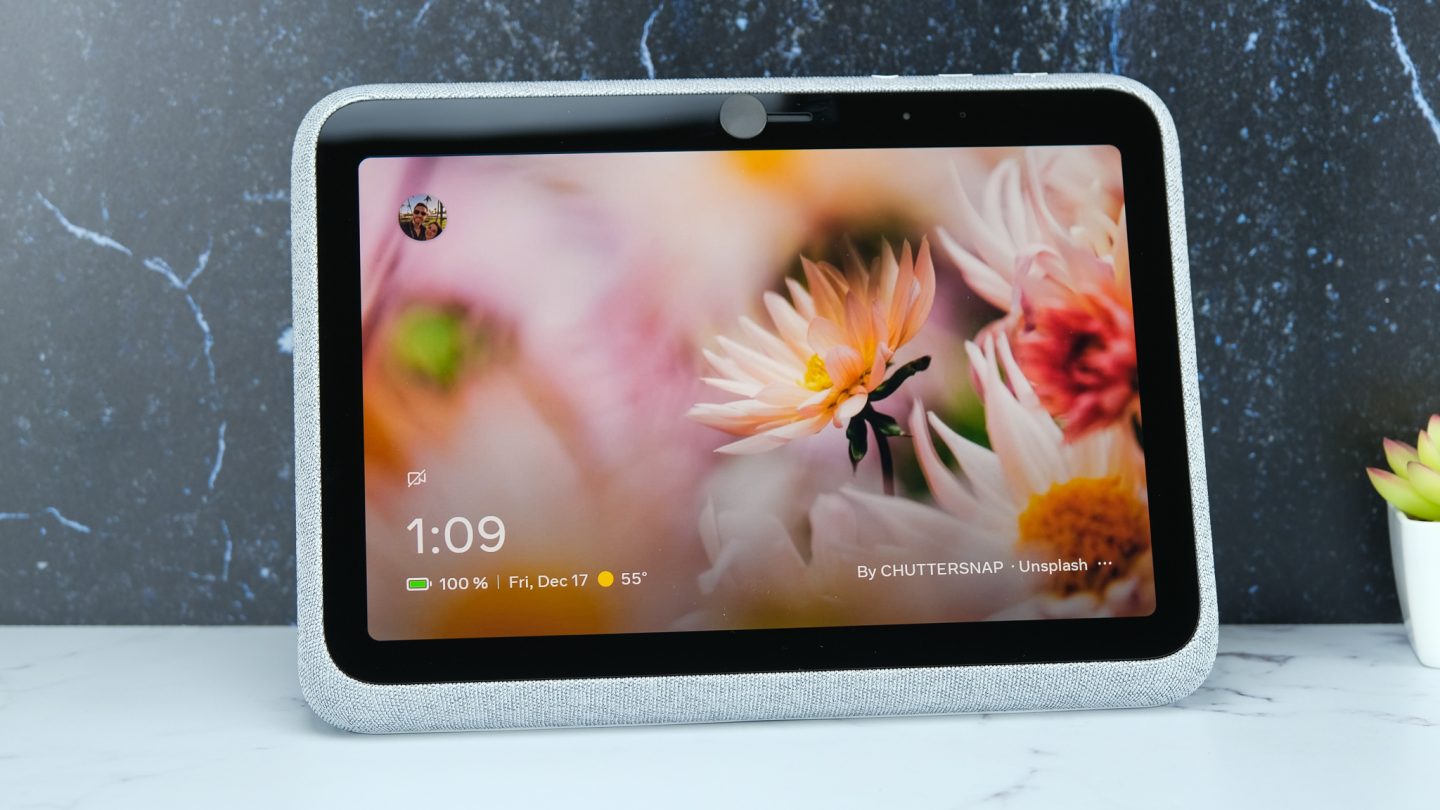 Facebook desperately wants to be a hardware company, and to some extent, it seems to be succeeding in this mission. The Oculus Quest 2 is an excellent virtual reality headset, for example. But it’s not the only hardware Facebook’s now parent company, Meta, makes. The Meta Portal Go is built as a portable smart display that makes it easy to video chat with family and friends, and more.

The Portal Go offers a relatively friendly design, easy to use software, and comes with a cover for the front-facing camera. So, you don’t necessarily have to worry about Facebook watching you all the time. But should you get a Meta Portal Go for yourself? Or go for something Google or Amazon-based? I’ve been using the Meta Portal Go to find out.

The Meta Portal Go may be based around the Facebook ecosystem, but it’s portable, has a smart camera, and comes at a decent price. 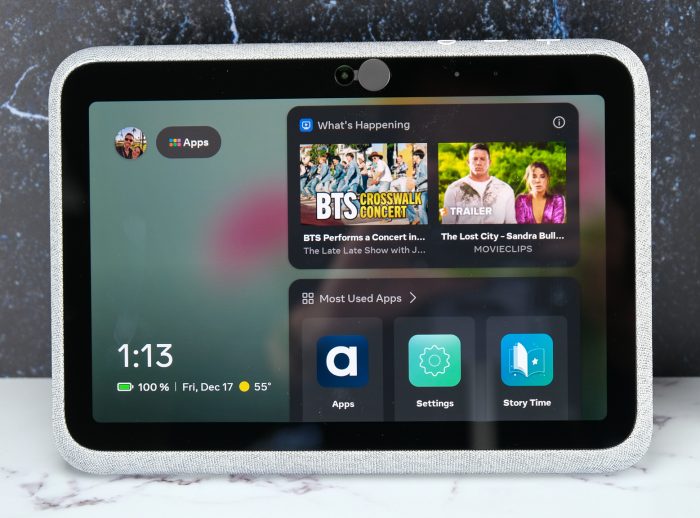 The Meta Portal Go offers a design that looks generally friendly, and should fit in any home. The device is covered with a fabric on the sides and back, with a black bezel around the display on the front. On the top is where you’ll find volume buttons, and a button to mute the microphone and turn off the camera. It has a wedge shape, with an angled front — so it’s easy to place near a wall, for example.

There are actually two ways to turn of the camera on the Portal Go. There’s the button on the top, plus there’s a physical cover for the camera. You can slide it back and forth as you need it. It works well, and while it doesn’t do away with all of the worries about being tracked, it does at least help ensure that you’re not being watched.

The Portal Go charges with a small puck-shaped charger that fits under the bottom of the device. It’s relatively easy to place the Portal Go on the charger when you need to. And, because it doesn’t attach magnetically or plug in, you can remove it by simply picking the Portal Go up. Picking it up is even easy thanks to the handle on the back, too. The Go has a power button on the back as well, though you likely won’t use it much.

Generally, I like the design of the Portal Go. It’s on the large end for a smart display, with a screen that measures 10 inches. That screen has a resolution of 1280 x 800, which isn’t the most detailed out there — but it looks fine. You might watch the occasional video on this display, but you won’t be watching movies as attentively as you would on a TV, so I think the display is fine. That said, I do wish it could get a little brighter.

The software on the Portal Go is pretty easy to navigate, whether you want to listen to music, watch videos, or video chat. The software generally places video chatting front and center, allowing you to place your favorite contacts always on the home screen. That’s helpful for those who use Facebook to video chat already.

After a few minutes of inactivity, the Portal Go goes into an ambient mode, which shows a screen saver, the time, battery status, and weather. You can choose to have your photos used in this mode, or just use the default images, which rotate through different images of nature. To wake the device, simply tap on the display. Then, you’ll be able to cycle through your contacts and apps.

The app selection isn’t terrible, but it’s not amazing. You’ll get access to things like Zoom, Spotify, and more. But others are simply bookmarked web pages that appear as apps on the home screen. It’s a decent way of getting around the limited app selection, but doesn’t work as well as a native app would have. You can pin any website you want for quick access, which is nice.

The Portal Go has a built-in browser, which works pretty well. I was able to navigate the web without issue. While the built-in keyboard isn’t the easiest way to browse the web, that’s to be expected anyway.

While the Portal Go works with many Facebook services, it surprisingly doesn’t work with all of them. You can’t simply browse your Facebook feed, and there’s no dedicated Instagram app. That’s a little weird for a device made by Facebook, and while you probably wouldn’t turn to this device for social media first anyway, you should still be able to access it.

You can also control the device with your voice, using Hey Portal as the wake-word. I found the device to respond to my requests very quickly, and while it’s not the most capable assistant, it works well for what it can do. It also supports Alexa though, so you can use Alexa to control everything that Portal’s assistant can’t.

Of course, perhaps one of the most important aspects of the Portal Go is its camera quality. The camera on the Portal Go is a 12-megapixel camera. Better than its hardware, however, is its software. It can pan and zoom as you move around the frame, helping keep you front and center even if you’re cooking, for example. It works pretty well — and functions similarly to Apple’s Center Stage feature. Colors are generally relatively vibrant, while details are sharp.

The speakers are solid as well. They can get relatively loud, and offer a relatively deep sound profile overall, especially for more casual music-listening. Because it doesn’t support Apple Music, however, I didn’t use it for music all that much.

The Meta Portal Go is able to last a decent amount of time before it needs charging, but you’ll still want to keep it on its base when you’re not using it. You can pick it up and carry it around during the day, but it won’t last much longer than two days or so of consistent use before it runs out of juice. If you keep the device on its dock at night, you should be perfectly fine.

This device is now called the “Meta Portal Go” instead of the “Facebook Portal Go.” But it’s still very much a Facebook product. That may worry some, and rightly so.

Thankfully, at least some of those worries have been addressed by Meta. There’s a physical cover for the camera, so you know Facebook’s not watching you. While you have to partially trust the microphone mute button, it’s better than nothing.

There’s not much that can be done to address other issues in this device alone. For example, you might not really appreciate Facebook’s role in the spread of misinformation online. Or, you may be worried about what kinds of activity data the device collects. You should go through the settings on the device and set up the device based on what you want from the settings.

The Meta Portal Go is a solid smart display that gets many things right. Video chatting works pretty well, the software is easy to navigate, and the device sounds pretty good. It’s not perfect. It’s not the smartest device out there, and while it works with Alexa, if you’re in the Google or Apple ecosystems, you’re out of luck. But if you use Alexa and want a little more Facebook in your life, the Meta Portal Go is a solid option.

There’s plenty of competition in the smart display space, from both Google and Amazon. Ultimately, they may offer a better experience at a lower price. From Amazon, there’s the Echo Show 8, which has a slightly smaller display but comes at only $95. Or you could get the Echo Show 10, which has the same size display, a rotating screen, and more advanced features.

Yes, but only if you want to dive deeper into Facebook’s ecosystem. Otherwise, get something from Amazon or Google.