By Brittany Vincent
Updated 1 year ago 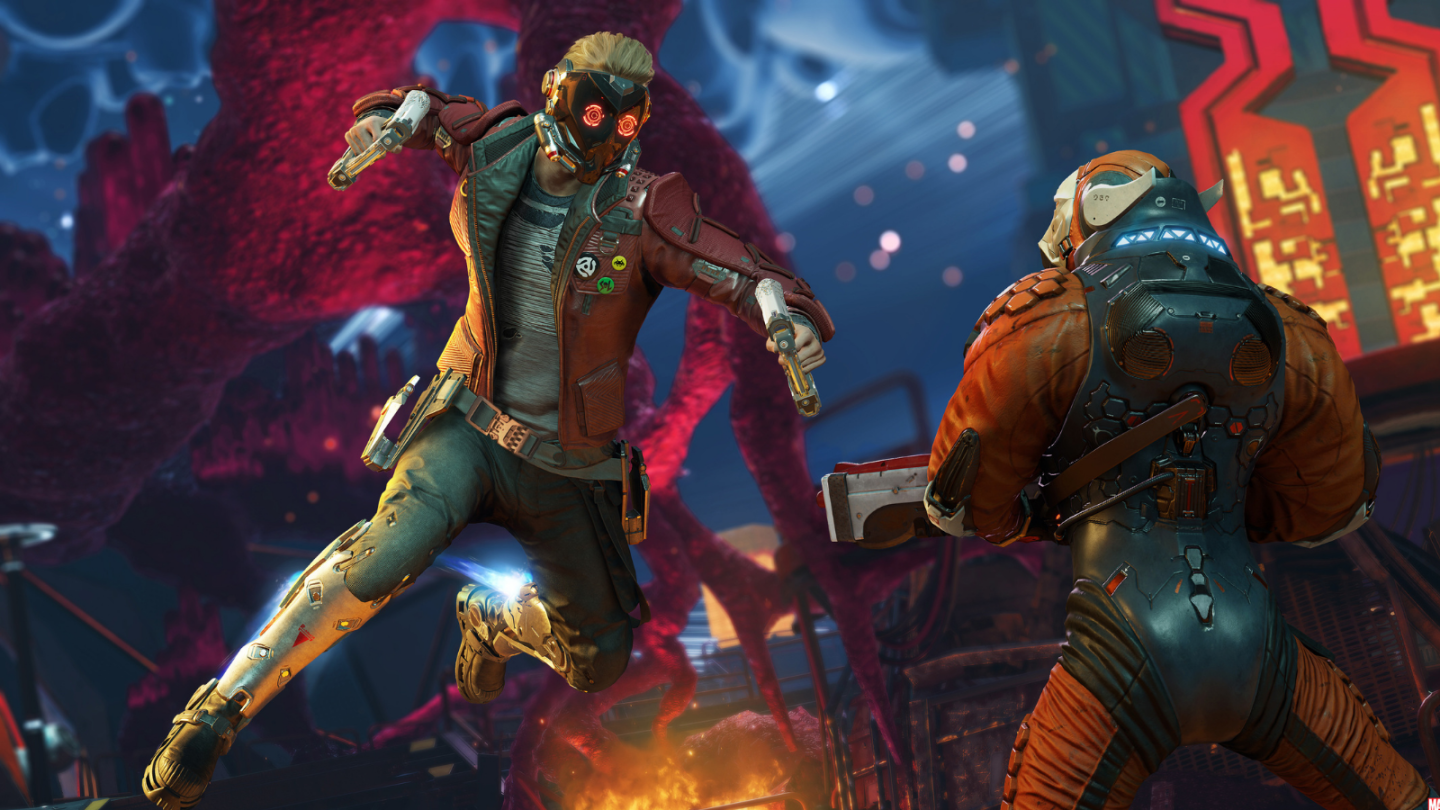 After the disastrous launch of Marvel’s The Avengers (based on the wildly popular superheroes) last year, I didn’t hold out much hope for Eidos-Montreal’s Guardian’s of the Galaxy game.

The Avengers somehow made taking control of the world’s foremost super squad a tedious grind fest, and I feared another Square Enix-published game might have similar issues. Fortunately, the devs behind Marvel’s Guardians of the Galaxy decided to lean into what makes the property a fan favorite. The result is a single-player adventure reminiscent of the movie series. 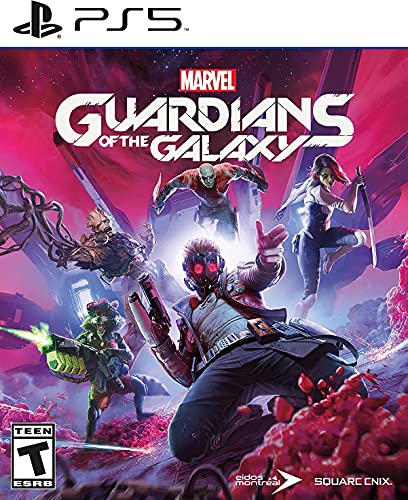 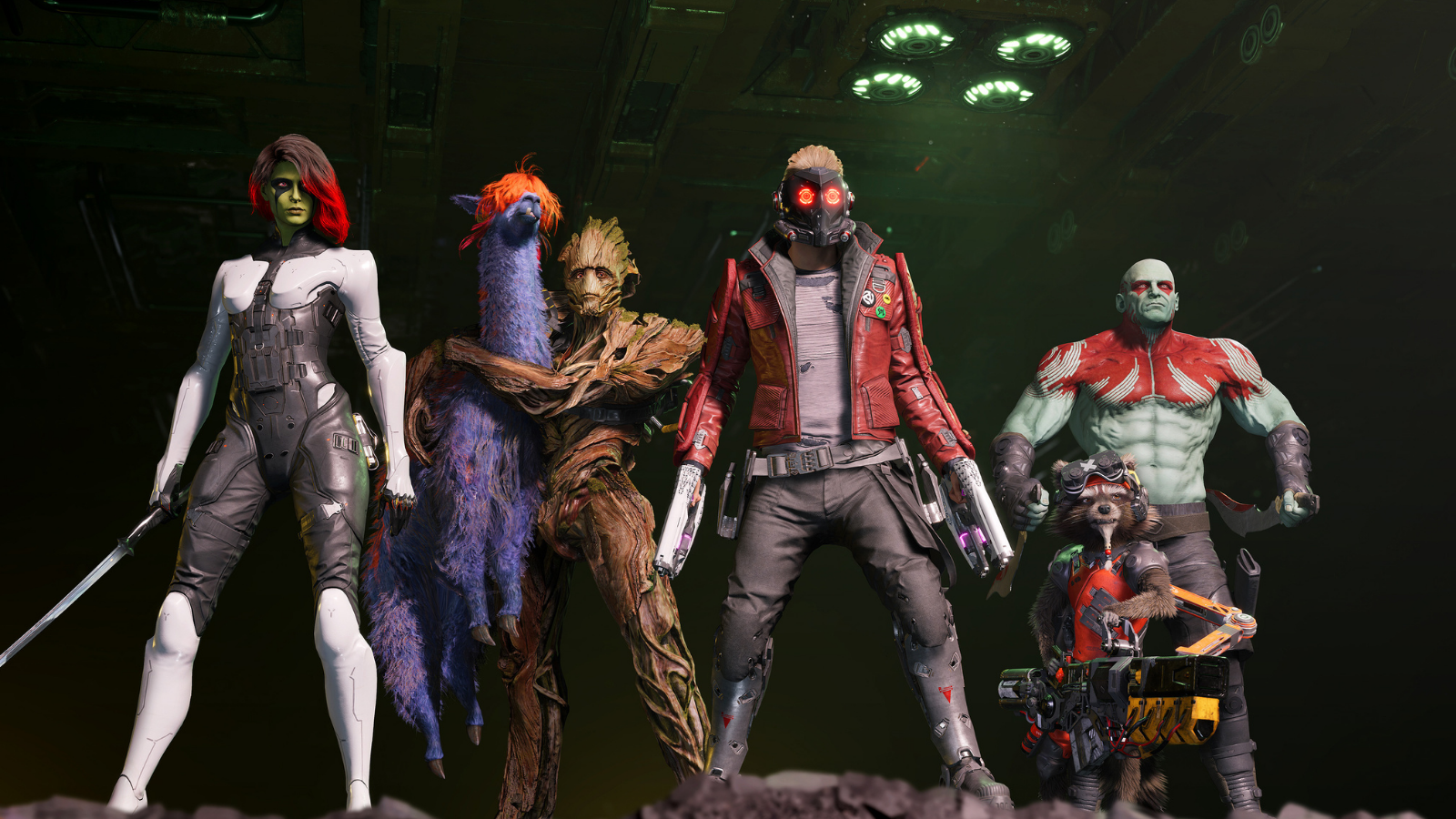 Despite having the same name as the film, Marvel’s Guardians of the Galaxy isn’t connected to the Marvel Cinematic Universe. It also isn’t connected to any of the comic series, nor is it a sequel to the Telltale Games adventure. Instead, it’s a new continuity set years after the galactic war against Thanos.

Despite being heroes of the war, the Guardians aren’t doing great. They’re still taking on bottom-of-the-barrel jobs to make ends meet, and one of these takes them to the Quarantine Zone, an area the Nova Corps surrounded with a forcefield to contain derelict weapons and ships from the war. A client wants the Guardians to enter the zone and obtain a monster for their menagerie.

Unfortunately for Star-Lord, Gamora, Drax, Rocket, and Groot, a Nova Corps ship spots them as they’re exiting the zone, and they’re slapped with a steep fine. A tracker is installed in their ship, the Milano, and they only have a short time to pay the fine; otherwise, their vessel will be disabled, and a warrant will be issued for their arrest. The Guardians’ attempt to pay their fine gets them embroiled in a galaxy-threatening situation, and they must begrudgingly solve it before it’s too late.

The game shows the relationship between the Guardians in surprising depth. Though there’s plenty of the fast-paced, quip-throwing shenanigans fans have come to expect, you have the opportunity to learn about each team member’s past, aspirations, and feelings during downtime between missions on the Milano. In addition, there are items scattered around the game that can unlock further conversations, which gives players an incentive to explore levels. For example, finding a control harness will unlock a conversation with Rocket about his origins on Halfworld.

The storytelling and pacing in Marvel’s Guardians of the Galaxy remind me a lot of Mass Effect. Like that series, there are choices you can make that affect a mission. You play as Star-Lord, and as the leader, your reaction to a situation influences the party’s attitude. For example, there’s a point in the game where Drax suggests throwing Rocket across a chasm so he can hit a switch to extend a bridge. Should you choose to encourage it, Rocket will activate the bridge, but he’ll be mad and refuse to help in a similar situation later in the mission. None of these decisions have huge consequences, but it gives the game some replayability since there are alternate reactions, scenes, and sometimes mission paths depending on what you choose. 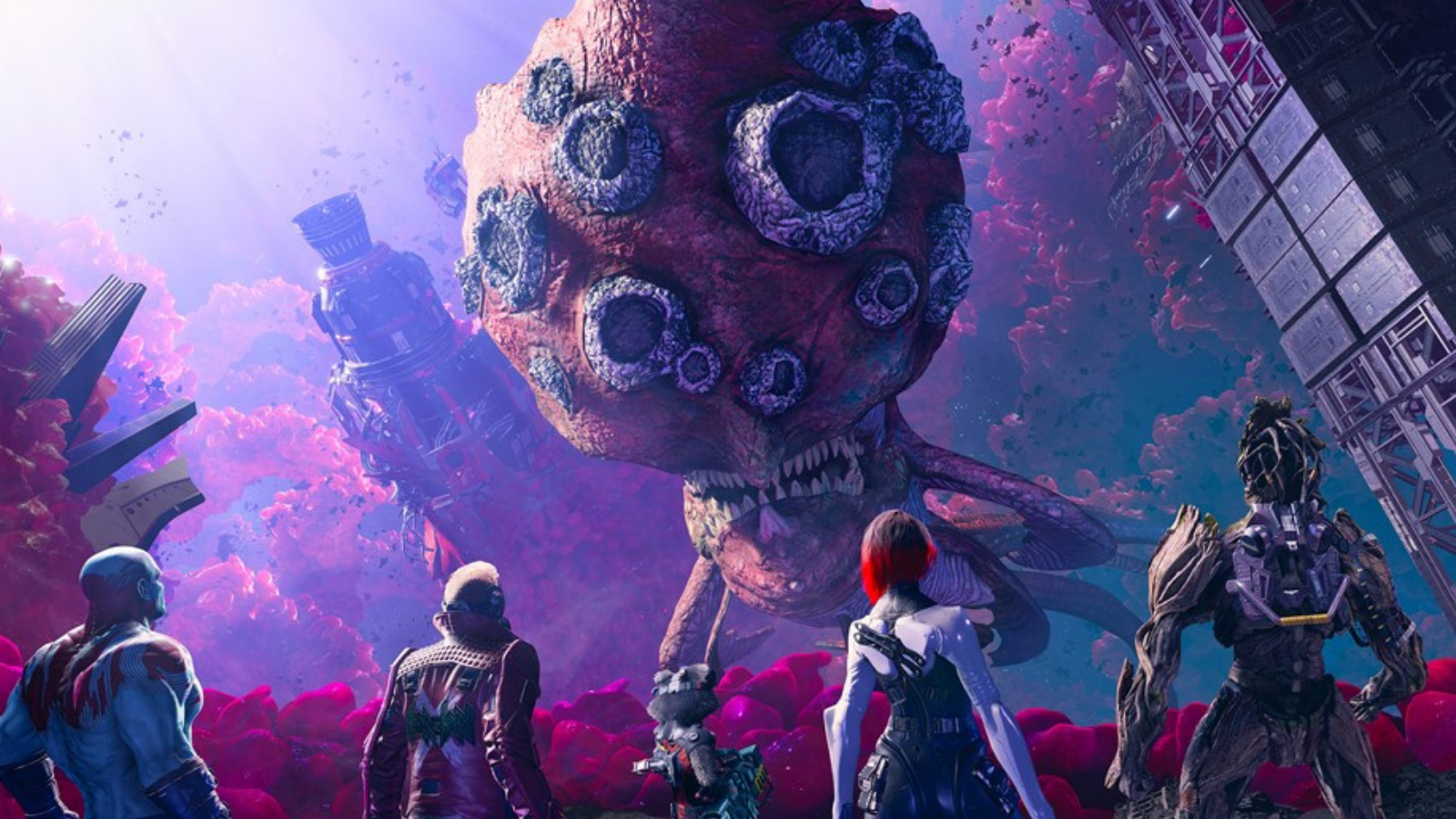 You play the entire game as Peter Quill, aka Star-Lord, from a third-person perspective. Gameplay is a mixture of exploration with light puzzle-solving and combat. For the most part, you’ll be traversing areas and using Star-Lord’s jet boots, guns, and the abilities of the other Guardians to make it to a particular objective.

Each Guardian has a specialty that can help the team make it past obstacles. Drax lifts heavy things, Gamora can slice and dice, Rocket can fit in small places and work with tech, and Groot can form vine bridges or bind objects. The need to call on your party to help traverse the game adds to the feeling of teamwork. It would have been easy to just have Star-Lord do everything while the others tag along, but the devs put a lot of thought into making sure each Guardian gets a chance to be useful.

Unfortunately, the galaxy is a dangerous place, and the Guardians often find themselves at the end of a gun, sword, claw, or another fighting implement. The combat in this game is reminiscent of Final Fantasy 7 Remake. Each enemy has two bars, health and stagger. Many run-of-the-mill foes can just be pounded on until they fall, but tougher ones will require you to fill their stagger gauge. Once an enemy is staggered, they stop attacking and their defenses are lowered, which allows the team to whale on them for a short time. Teamwork comes into play here as well as some Guardians are better at doing damage, and others excel at increasing stagger.

Like many other titles, this game has some light stat-building elements. There are perks to unlock that enhance Star-Lord’s capabilities. Also, aabilities can be unlocked for each Guardian by beating enemies and leveling up. While you can’t control the other Guardians directly, you can ask them to execute special attacks on foes, which results in an interesting combo system. You can have the Guardians use their abilities whenever they’re charged, but for them to be most effective, you have to keep in mind which Guardian excels at what. For example, you can have Groot hold down a group of enemies with vines so that Rocket can easily hit them with an explosive. Alternatively, you can call on Drax to stagger an enemy with a mighty combo so Gamora can do maximum damage with her sword slash.

Star-Lord’s guns also bring some strategy into the game. Players will acquire four different elemental attacks during the course of the game, and using the right type of element can destroy enemy shields and rapidly fill their stagger. They can also be used to solve puzzles and clear paths for the team.

Rounding out the Guardians’ arsenal is the group huddle. Star-Lord can call the other Guardians in for a huddle when the going gets tough (and the right meter is full). Players need to listen closely to the team’s concerns. Then, respond with the right choice to get an attack boost for everyone. Otherwise, you’ll still fill everyone’s health up, but only Star-Lord will get the upped attack buff.

Unfortunately, the game isn’t bug-free. I had issues with a progression softlock when Rocket wouldn’t move to a panel and use it, and when I executed a huddle, the team just never started talking. These were solved by reloading the last checkpoint. Fortunately, the game judiciously auto-saves, but it was still annoying.

Marvel’s Guardians of the Galaxy Review: Graphics and Sound 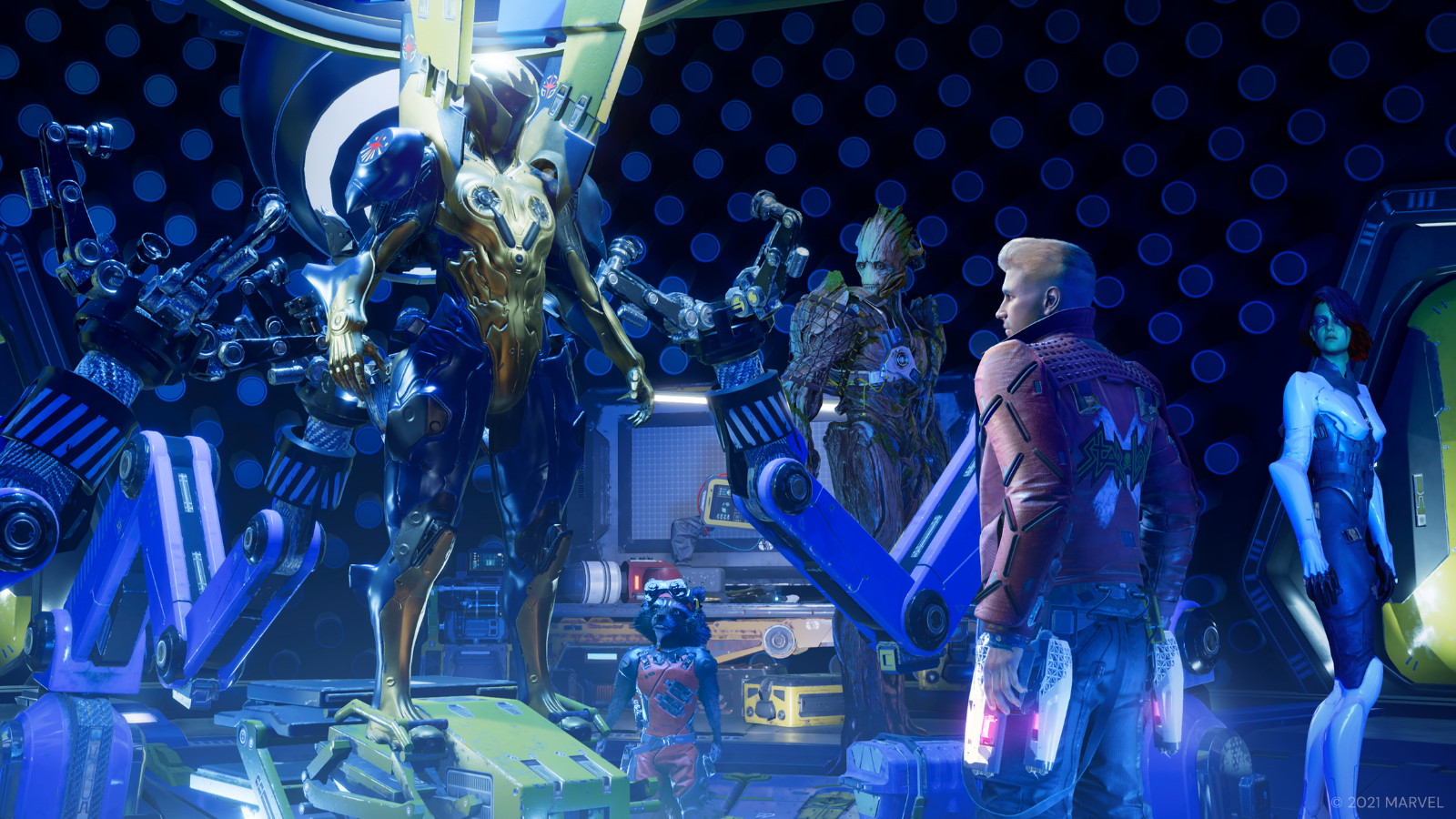 This Guardians game isn’t straight out of the MCU. That point will disappoint fans. These characters are more the Joe Everyman version of the team. While Drax, Groot, and Rocket are pretty close to their Hollywood counterparts, Starlord and Gamora are decidedly less glamorous than Chris Pratt and Zoe Saldana. However, it works and makes them a bit more relatable in my eyes. Star-Lord is just some kid from Earth. Gamora is an orphan that some megalomaniac adopted, and that really rises to the surface without the star power.

This game’s characters and original costumes give it a unique look that keeps the Guardians of the Galaxy vibe without tying it too firmly to any continuity. Players can also find costumes by exploring levels, some original and some based on outfits from other continuities. I love playing dress-up, and I was constantly vigilant for a chance to pick up one of around a dozen costumes per character.

Of course, the sound is fantastic, and there’s plenty of licensed music here to shred baddies to. Peter’s love of rock connects him to his past, and the game wouldn’t be the same without a killer soundtrack.

The voice actors also do an excellent job with the characters. Surprisingly, I didn’t spot any of the more prominent names here. As much as I love Nolan North, Troy Baker, and Laura Bailey, it would be hard with characters this established for it not to feel like “Nolan North as Star-Lord.” Notably, Brandon Paul Eells, who played Drax in Telltale’s Guardians of the Galaxy is reprising the role here and does a fantastic job. 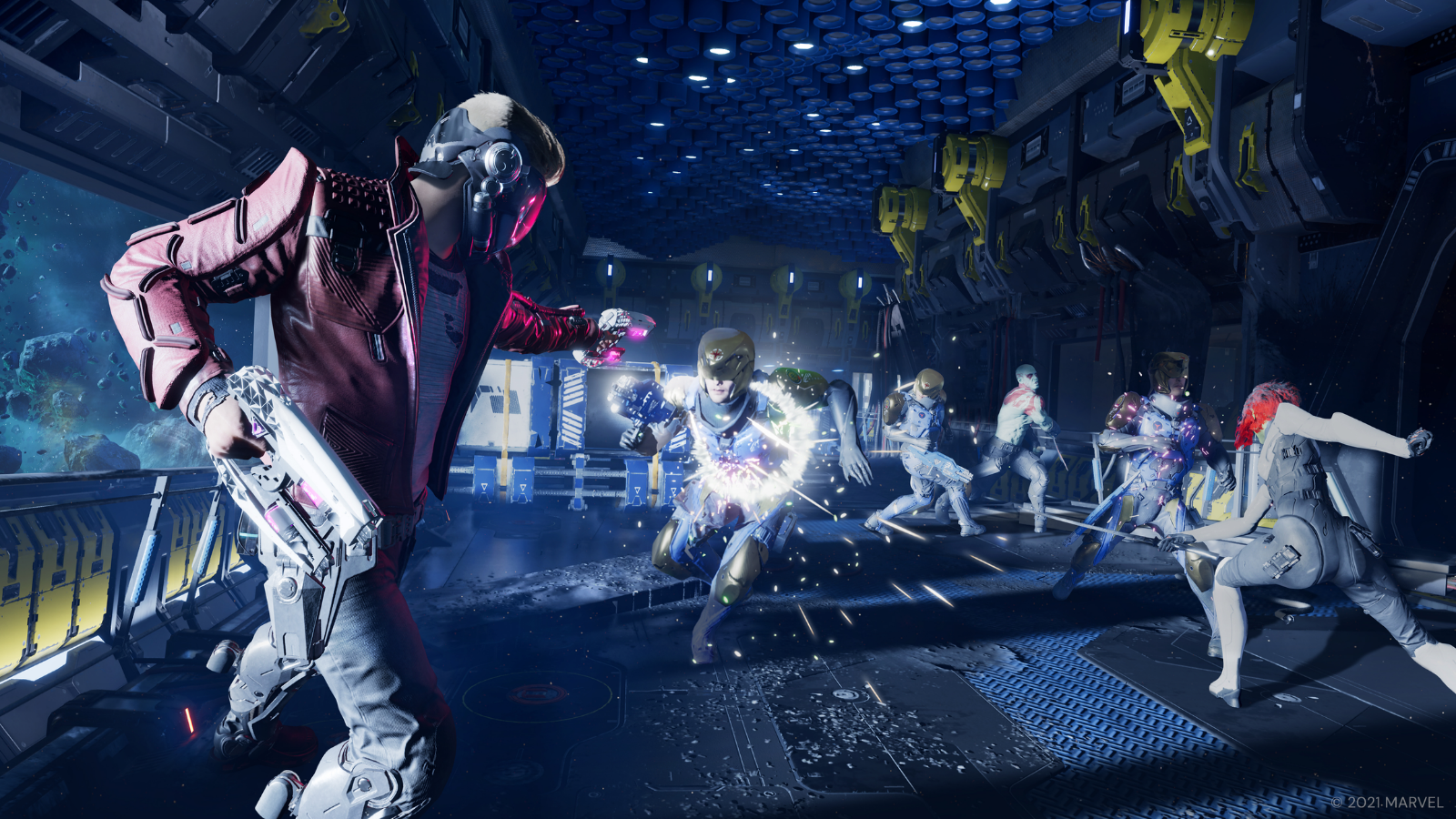 Marvel’s Guardians of the Galaxy is a wonderful experience that makes excellent use of its license. The primary issue with Marvel’s Avengers is that the IP was just window dressing for the gameplay. Remove the Avengers, and that game would be pretty much the same.

The fact that this game is a Guardians of the Galaxy game is woven into its core. The gameplay is a vehicle to immerse you in an adventure with the Guardians. This synergy between the setting and gameplay makes this game incredibly immersive. As you play, it’s hard not to think of the Guardians as your friends, and by the end, it’s hard to say goodbye.

Marvel’s Guardians of the Galaxy is an excellent example of how to adapt an existing IP into a video game, and I hope other studios take note. This game (and Star Wars Jedi: Fallen Order) are the licensed games to beat now.