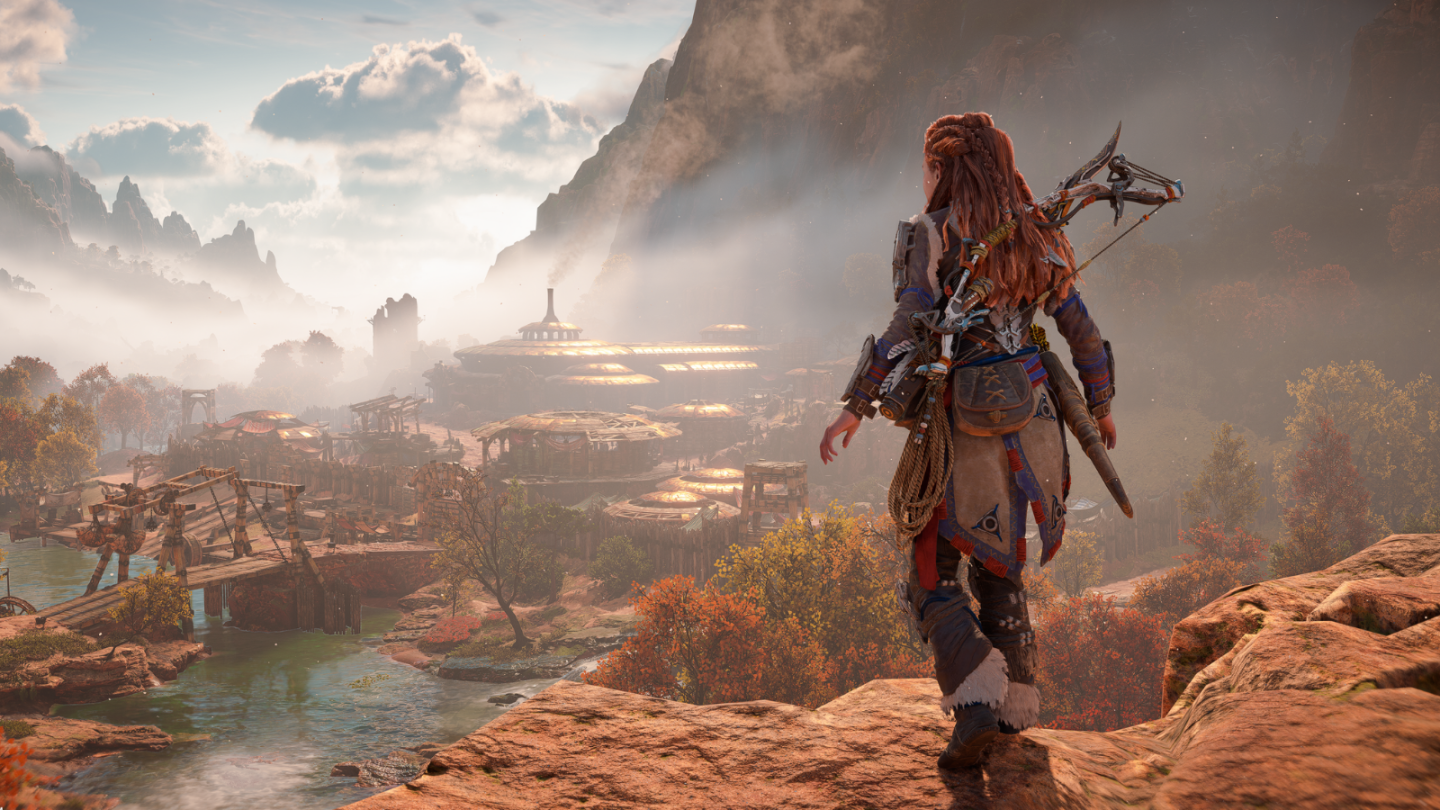 In Horizon Forbidden West, we see that heroine Aloy’s victory after Horizon Zero Dawn was short-lived. In the aftermath beyond the endgame fight with HADES, the land is poisoned. Animals and plant life are dying at an alarming rate from the spread of Red Blight. Machines continue to roam the land, as aggressive as ever. The only thing that can stop humanity’s slow slide toward its (second) extinction is the terraforming AI, GAIA.

The sequel to Guerrilla Games’ excellent open-world third-person action RPG is a fantastic follow-up to a satisfying new IP. It brings players back to a living, breathing world teeming with personality and conflict, with memorable stories and characters. While it doesn’t introduce too many new ideas, it’s a comfortable and engrossing quest. Anyone looking to get more of Aloy and her cadre are sure to salivate over this expansive adventure.

Aloy returns in Horizon Forbidden West, the sequel to Horizon Zero Dawn. How does this next outing fare? Here’s what you need to know. 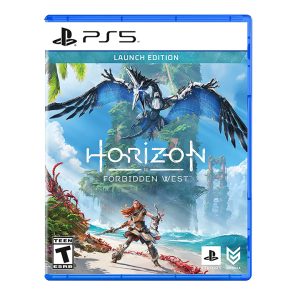 Your primary objective in Horizon Forbidden West is to trek across the western part of the former United States in search of a backup of GAIA. The original GAIA was purged when HADES became active. But Aloy hopes that a copy exists and that she’ll be able to restore it to its original state. In theory, if GAIA is reunited with its most important subsystems, AETHER, DEMETER, MINERVA, POSEIDON, and HEPHAESTUS, it could retake control of enough of Zero Dawn’s systems. That would allow it to set the terraforming process back on the right track and return the machines to normal.

However, the Forbidden West, where Aloy must go to seek out GAIA, is named such for a reason. The vicious Tenakth tribe is the principal ruler of the area west of the Carja. Aloy will have to contend with them as well as new threats to complete her objective.

I enjoyed the main questline in Horizon Forbidden West even more than I did the first game. It does a great job of tapping into the lore of the first game. It also excels at answering lingering questions in a satisfying manner. There’s a lot of closure here. I’m glad it took the time to explore concepts introduced in the original game to their logical conclusions.

Side quests tend to be a bit meatier in the narrative department as well. Though many amount to “go here and find/kill this” the writing and acting has drastically improved. I cared a lot more about saving NPCs when I enjoyed the story behind it.

Unfortunately, the open-world design does work against the game at times. Played sequentially, the main narrative is definitely thrilling. It does feel as though you’re up against the clock to save the world. But when there’s so much stuff to do, Horizon Forbidden West is frustrating. It falls into the same trap I’ve seen in many games of its type. It’s hard to keep the suspense going when you’re constantly encouraged to go do a thousand things at a time. That means you’ll be asked to explore ruins, compete in training grounds, race others, and much more. All the time. There are countless activities, vistas, and side quests scattered around the world. It can be difficult to concentrate on one set of objectives to complete.

Horizon Zero Dawn was a beautiful game, and its sequel follows suit. On PS5, the excellent textures, models, and raytracing made the world come to life and made for some breathtaking visuals. However, there is a trade-off, even with Sony’s latest console.

There are two graphics modes available. “Favor Performance” targets 60fps with a variable resolution but ditches raytracing. “Favor Resolution,” on the other hand, tries its best to hit 30fps at 4K with raytracing one. I didn’t make an in-depth comparison, but I didn’t notice a ton of difference between the two visually. However, the fluidity of 60fps paired with the improved animations makes Performance Mode a winner for me.

The only issue I had with the graphics was that there was a lot of pop-in. The Day One patch helped the problem somewhat. It still seems like the game has issues with loading Level of Detail models and textures. As I approached certain large objects like skyscrapers and trees, models remained hanging in the air with the core object missing. Once I was much closer, the model would seem to load in several detail levels immediately before stopping at high LOD. I feel like this is a bug more than a performance issue, but it persisted throughout the game.

The audio work was excellent here as well. The soundtrack is subtle but adds the right amount of oomph at the right time. I also loved how bulky the devs managed to make the machines sound. The sounds of their joints creaking and the animal-like roars as they attacked added to already tense fights.

Forbidden West’s gameplay isn’t very far removed from Zero Dawn’s. You will spend most of your time exploring the ruins of the old world. This is done much the same way as it was in the first game. You shouldn’t go into Horizon Forbidden West expecting it to be an evolution of the original’s gameplay.

Exploration is less linear this time around, which is great because it was my favorite part of the original. Instead, Aloy gets a set of tools that increase your ability to traverse the environment. The Pullcaster lets you grapple up to higher areas and pull certain vents and crumbled walls open. Pairing this with the Shieldwing, which lets you glide through the air, plays into the games’ greater emphasis on verticality.

Guerilla Games really took into account all three dimensions with the world of Horizon Forbidden West. There are areas where Aloy can climb up or down to explore multiple heights. She also gains access to a new domain. You have to take to the water to find some of the secrets of the Old Ones, too. I’m glad to say it’s actually fun. Aloy does initially have a limited amount of time she can hold her breath. That does change later on, though. The developers did a great job using the breath meter to add suspense during certain parts of the game. They also got rid of it before it started being obnoxious. It’s definitely something to appreciate.

The core combat carries over from the original game. The main thing you’re targeting on both human and machine enemies are weak points while avoiding armor. Of course, you can still knock armor off to get at the meat underneath.

The most significant combat addition to the game for me was overloading elemental canisters to cause an explosion. Some of the machines in the original game were more tanky than challenging. But this time around, machines have easily exploitable weaknesses. Hit an elemental canister with an attack of the same element and it’ll overload and detonate. That immediately places the machine in the relevant elemental state.

Another new aspect of combat is Valors. You unlock these from the expanded skill tree and bestow temporary buffs. They give you a lot of freedom when it comes to building your character. When used in conjunction with the right weapons and armor, they’re very powerful. Ranged Master, for example, raises Ranged Weapon Damage. It also helps you recover health with each attack and increases weapon technique damage and weapon stamina regen.

Each of the six technique trees, Warrior, Trapper, Hunter, Survivor, Infiltrator, and Machine Master, have multiple valors that can be equipped. I enjoyed their tendency to make me lean into a build instead of trying to be a jack of all trades.

There wasn’t a complete overhaul of the crafting and inventory systems. Instead, this game is more of a refinement. Every aspect has been tweaked to make them more player-friendly. There are some very welcome quality of life improvements. However, at their core, these systems haven’t changed too much.

Little things go a long way toward easing frustrations I had with the original game. These include a better inventory UI and easier weak spot highlighting on machines. You need to hit those to knock off higher rarity parts. But it still commits one of the cardinal sins that haunt seemingly every game these days: too much loot.

The game makes extensive use of crafting. You must constantly pick up materials if you want to continue manufacturing ammo or upgrading weapons and armor. I don’t mind a little bit of looting here and there. But when you’re entering your 30 or 40th hour of playing and hoovering a minute’s worth of loot after every fight, it detracts from the experience. For this, I would have appreciated an autoloot function.

I would have also liked to have seen a transmog system or cosmetic slots for the armor. Each armor in the game has unique stats and buffs. It’s a bummer if you like the way mounted combat armor looks, but you’d rather go with a stealth or a melee build. And honestly, some of the armor is pretty unattractive.

Horizon Forbidden West is a riveting follow-up to one of PlayStation’s best new IPs. It expands the story and universe in meaningful ways. It further endears Aloy to players beyond what we initially knew of her. If you’re ready for a thrilling 30+ hours, you’ll find just that here. If you’re hankering for an epic, cinematic ride that’s exemplary of what the PS5 can offer, Horizon Forbidden West is it. It doesn’t reinvent the wheel, but it does offer one of the finest action adventures currently on the console.