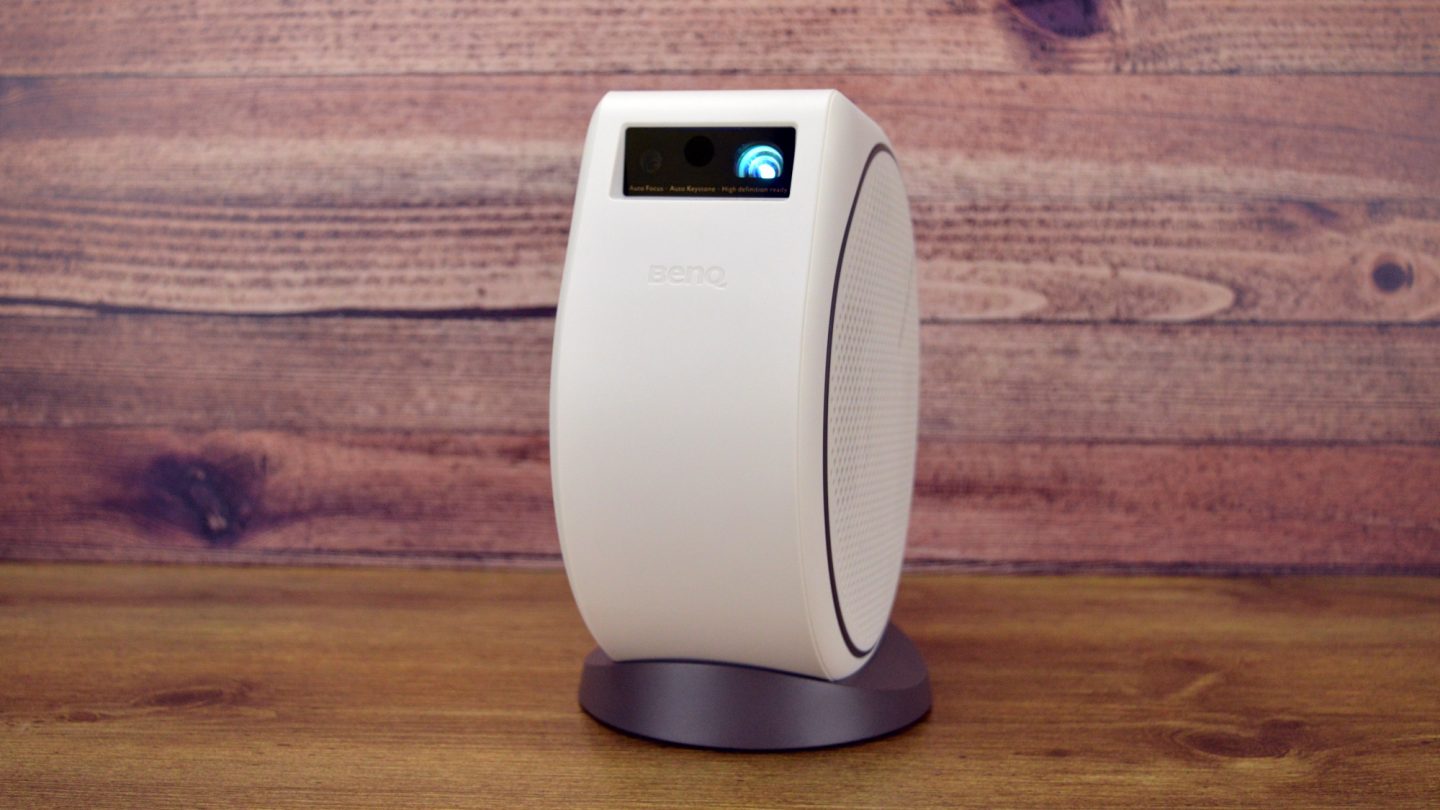 Projectors have improved by leaps and bounds over the past decade or so. There was once a time when owning a decent projector meant having a massive box that was heavy and always had to be plugged in. But portable projectors have been rising in popularity, and these days, they’re not terrible. BenQ recently unveiled a duo of portable projectors, including the new BenQ GV30, which offers a unique design, and is aimed at boasting decent audio.

But how well does the BenQ GV30 actually perform? As a portable device, it has an uphill battle ahead of it. Add in the fact that BenQ is touting a high-quality audio experience and smart software, and there’s a lot to consider. The BenQ GV30 comes at $599, which isn’t cheap.

We’ve been testing the BenQ GV30 to find out just how well it performs. 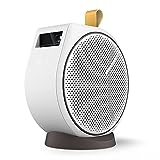 BenQ has taken a unique approach with the design of the GV30, and the product is much better for it. Gone is the boring black box look in favor of a trendy, easy-to-use design that I really like.

The projector itself is built with white plastic, with a circular shape, and a squared-off tip for the projector lens and controls on the top. The main projector is 7.7 inches tall, 7.3 inches deep, and 4.7 inches wide. That makes it quite a bit smaller than many other projectors out there as a whole. It’s definitely taller than many others, but that’s just the way it’s built — on its side, it’s much smaller. The device also only weighs 3.53lbs, which is quite lightweight.

The projector also comes with a small stand, which attaches magnetically to the bottom of the projector. It’s a pretty smart design — as it means the angle of the projector can be tilted based on your setup. Considering the fact that the GV30 is designed to be portable, that can really come in handy.

On the top of the projector can be found four physical buttons to control the projector. There’s a power button, two volume buttons, and a Bluetooth pairing button.

On the right of the projector can be found a few ports. There’s an HDMI port, a USB-C port, and a headphone jack, along with the power input. It isn’t a large selection of ports, but considering the fact that it’s built to be wireless, that shouldn’t be a huge issue.

The projector comes with an Android TV dongle, the QS01, instead of just having Android TV built into it. Thankfully, the dongle doesn’t have to stick out the side and take up the one HDMI port — there’s a second HDMI port covered by the side panel. BenQ told me that this approach is for the sake of easier firmware updates.

There’s also the remote to consider, and it’s generally pretty easy to navigate. It offers all the basic software controls, a button for Google Assistant, and an Amazon Prime Video quick-access button.

The BenQ GV30 is built to offer a modern experience, which means that it’s packed with wireless features and software.

As mentioned, the projector has Android TV (assuming you have the dongle installed), and here, it works fine. Android TV in general is a heavy operating system, and that shows here. In day-to-day use, that shouldn’t be much of an issue, but we definitely encountered the odd skip and brief freeze every now and then. That seemed to be especially true while trying to use Google Assistant, which often took a second or two to be ready to be talked to.

When you’re connected to the internet, Android TV is how you’ll stream content from your preferred app or service. That said, you may have to jump through some hoops to access some apps. For example, Netflix isn’t natively supported on the device, so you’ll have to download a series of apps and third-party app stores to get it. That’s a little frustrating. It seems as though this is Netflix’s fault — not BenQ’s — but still something to consider.

You don’t have to rely on Android TV. Apart from the built-in HDMI port and USB-C Display Port, you can also stream to the projector wirelessly through Google Cast (although that’s still a feature of Android TV). Alternatively, the projector can create its own Wi-Fi network, which your phone can connect to, and stream directly to the projector from media stored on your device. In other words, the projector is pretty versatile in its connectivity.

The projector can connect to the BenQ Smart Control app on your phone, but it’s a pretty limited app and doesn’t really do much. It’s basically just a remote control app, and doesn’t let you access advanced features like streaming.

As an inexpensive portable projector, this isn’t for those that want a high-end home theater experience. It offers a 720p resolution, with a 300 ANSI lumens resolution, and up to a 135-degree projection angle.

I found it relatively easy to look past the lower resolution. The projector is able to project an image up to 100 inches, but you’ll get the best image quality at around 80 inches. That’s large enough to notice that you’re definitely looking at a lower resolution image. But the trade-off makes sense to me. After a few minutes of watching, you’ll get used to the resolution, and get glad that the projector has a battery life long enough to watch a movie.

The device is definitely built to project in dark environments. 300 ANSI lumens isn’t very bright, and with any ambient light, you’re going to have a hard time seeing a clear image. BenQ does build a “Daytime Mode” into the projector to increase contrast, and it does help. But I would still recommend buying the projector if you plan on using it at night.

In the right environment, this projector isn’t bad. Again, this isn’t the height of viewing — but considering the fact that it’s portable, and built for smaller settings, it does the job.

The battery life on the projector leaves a little to be desired. You’ll get up to 2.5 hours on a charge, but BenQ says most will get between 1.5 and 2 hours. That might be enough to watch a movie, but a longer battery life would have been nice.

BenQ is quick to highlight the GV30’s speakers. The projector offers a 2.1-channel speaker system (two tweeters, one woofer), and while you won’t necessarily get a stereo spread or immersive experience, at least the projector is able to deliver a relatively well-tuned experience. Not only that, but if you want, you can use the device as a standalone Bluetooth speaker, which is a nice touch.

The speakers built into the projector are pretty solid. They’re definitely better quality than the majority of built-in speakers, and can get loud enough for most small-format sessions.

The bass response on offer by the projector is decent, however a little more bass extension would have been nice. It’s really not bad, and again, better than the vast majority of options out there. But it’s no Sonos speaker.

The mids are pretty well-tuned, with a little boominess in the low mids, and slightly laid-back high mids. And, the highs are much like the bass — decent-sounding, with good clarity, but not a ton of high-end extension.

The BenQ GV30 is really the perfect portable projector for those who want to take a projector camping use it outside for summer movie nights, or anything similar to that. It’s not super bright, and as a result, it’s really only for dark environments. But, if you’re willing to spend $599 on a projector and want something that’s compact and portable, the GV30 is an excellent option.

Perhaps the main competition comes from the Anker Nebula Mars II Pro. It gets brighter, and also doubles as a Bluetooth speaker, plus it has a longer battery life. The software built in to the projector is based on Android, but it’s not Android TV like the GV30. Also, the GV30 offers a much more interesting design. If the design doesn’t matter to you, the Nebula Mars II Pro may be a better option.

Should I buy the BenQ GV30 projector?

Yes, though you should also consider the Anker Nebula Mars II Pro, which gets brighter and offers many similar features.