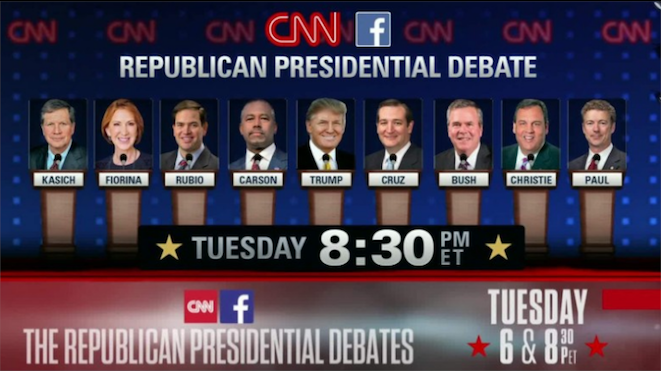 At long last, the debate season is coming to a close (temporarily). On Tuesday night, CNN will host the final GOP debate of 2015, with nine candidates scheduled to appear on stage in Las Vegas at 8:30 p.m. ET.

Once again Donald Trump will be taking center stage, as his poll numbers are still higher than anyone else’s. To his right will be Senator Ted Cruz and to his left will stand doctor Ben Carson. The other six candidates on the main stage will be Marco Rubio, Jeb Bush, Carly Fiorina, Chris Christie, John Kasich and Rand Paul.

As with each of the previous GOP debates, there will be a “first debate” at 6:00 p.m. ET during which Mike Huckabee, Rick Santorum, Lindsey Graham and George Pataki will have their say.

This is the first debate to take early state polls into consideration when deciding which candidates will actually appear at the main event. Rand Paul nearly missed out on the 8:30 debate, but was pushed over the edge by a Fox News poll showing his viability in Iowa released on Sunday morning.

“In the light of new polling released this morning and in the spirit of being as inclusive as possible, CNN has decided to include Sen. Rand Paul in the prime-time debate,” a CNN spokeswoman said.

The debates will be broadcast on CNN, CNN en Español and CNN International on television. If you’d rather watch online, you can tune in on CNN.com or through the CNN mobile app (iOS and Android).