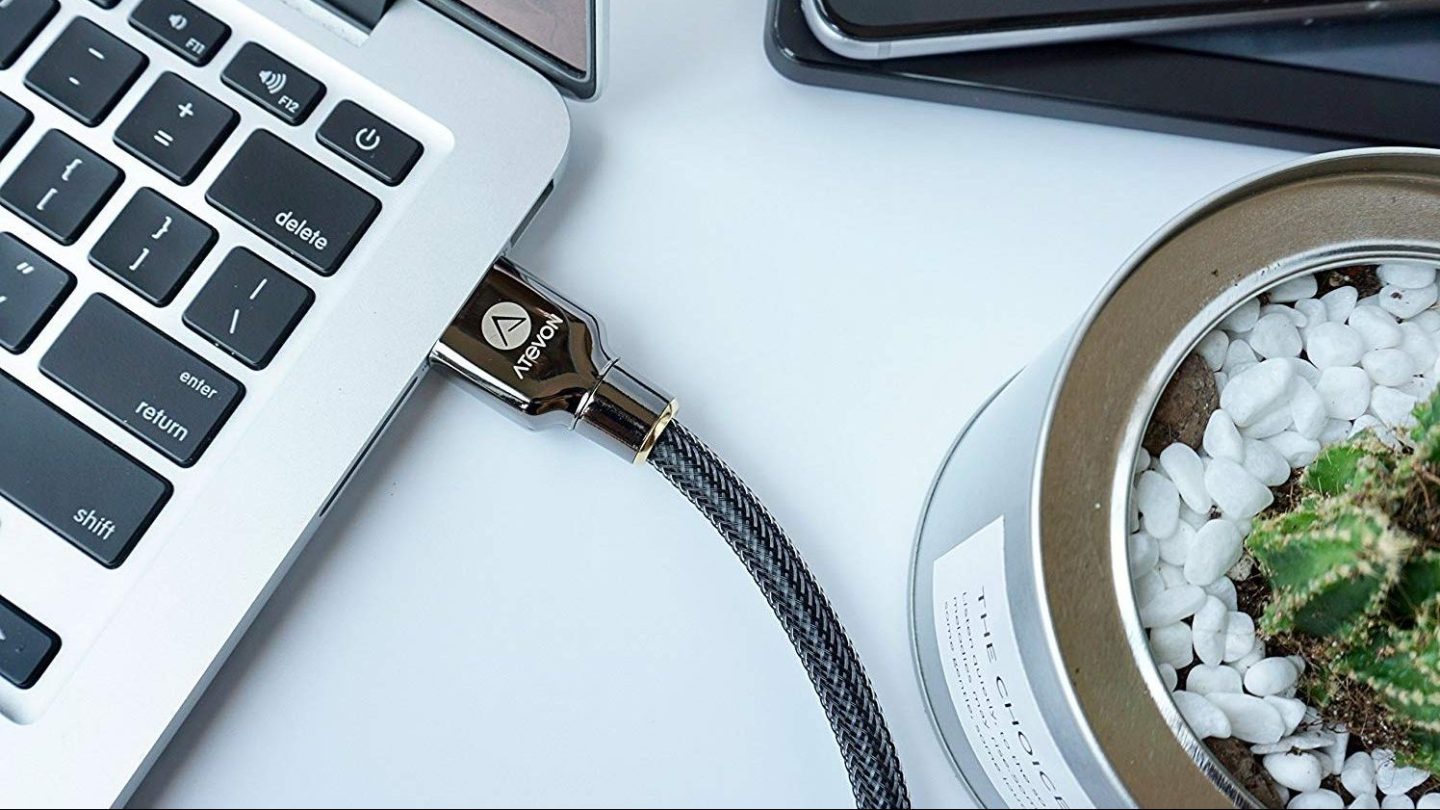 In today’s tech climate, having a range of high-quality and reliable HDMI cables on hand is more of a necessity than a luxury. Whether it’s connecting your laptop to the TV at work for a presentation, linking your Xbox One X gaming console to your home media setup, or simply installing a Blu-Ray player with HDMI 2.1 for Friday night movie night, it can be one of the most useful tools for most of your electronic needs.

Like most technology, however, the market is flooded with different brands, models, and iterations of the do-it-all cable. But when you’re talking electronics, you don’t want to settle for anything less than the best.

There are a number of things to consider when buying a new HDMI cable. I’ve been covering home theater tech for years now. Here’s a rundown of everything to keep in mind.

For starters, you’ll want to make sure you get something that’s long enough for your needs. In some situations, you may just want a cable that’s a few feet long. In other cases, you’ll need six feet or more. It’s really up to you to figure out how long of a cable you need.

You’ll also want to make sure you get the right type of cable. Contrary to popular belief, there’s no such thing as an “HDMI 2.1” cable. There are a few types of HDMI cable that you need to know about for day to day use:

Now that you know everything there is to know about HDMI cables, here are the best out there.

The AmazonBasics Premium Braided HDMI Cable isn’t necessarily all that fancy, but it gets the job done, while remaining relatively reliable along the way. 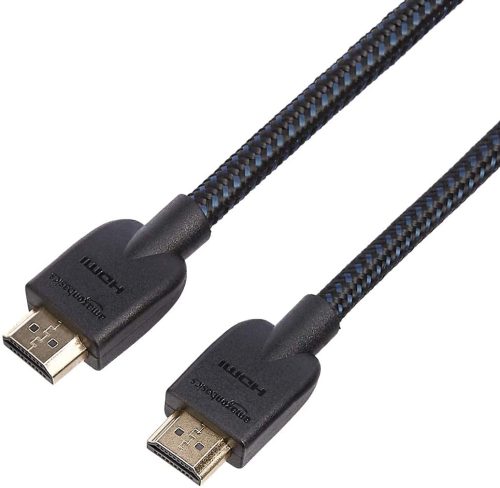 Looking for a great basic HDMI cable that does the job with no fuss, while remaining relatively reliable along the way? The AmazonBasics Premium Braided HDMI Cable is the way to go. This cable is available in a number of different lengths, doesn’t break the bank, and is designed with a braided nylon for a relatively strong build.

The cable is available in lengths from 3 feet to 25 feet, and you can get it in a single pack, or in a five pack. In other words, there should be something there for everyone. The cable is a premium high-speed cable, which means that it supports 4K video at 60Hz, and it supports HDR. That means that the cable should allow you to get the most out of most modern setups.

So what are the downsides to this cable. Well, there aren’t many, but despite the braided nylon build it may not be quite as strong as some others, especially at the connector. And, it’s not as flexible as some, which can make it harder to set up. But those things are easy to overlook, and very minor issues. Generally, this is the HDMI cable most should buy right now.

If you’re already looking for an 8K cable, then the Zeskit 8K cable is the way to go. This cable is strong, supports an 8K resolution with HDR, and isn’t overly expensive. 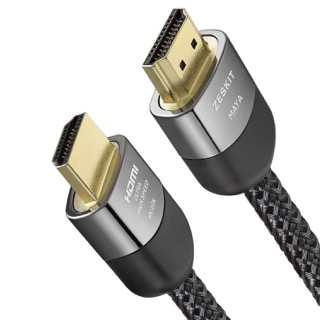 If you’re a little more future-forward, then perhaps it’s worth considering a cable that supports 8K video. That way, you can either use your 8K gear now, or keep using your HDMI cables when you upgrade in the future. If that seems like a good idea to you, it’s worth considering the Zeskit 8K Ultra HD High Speed HDMI Cable.

There are a few things that make this such a great cable. As mentioned, the cable supports 8K video with HDR meaning that when you upgrade to 8K equipment, it’ll be ready. The cable is also pretty strong, built with a braided nylon, and it’s flat. The flat build means that it may be easier to manage behind your TV stand.

There aren’t many downsides to the cable, but the main one is that it’s a little more expensive compared to other HDMI cables on this list. Still, it’s not overly expensive, especially at shorter lengths.

If you’re looking for a longer cable, then the Monoprice Cabernet Ultra Active HDMI Cable is the way to go. The smallest length of this cable is 25 feet, and it ranges all the way up to 100 feet. 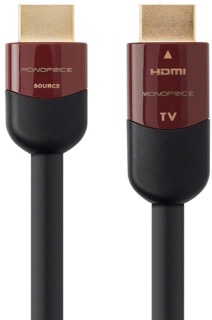 If you need something a little longer than the other options on this list, then look no further than the Monoprice Cabernet Ultra Active HDMI Cable. This cable may not be as strong or as premium as some others on the list, but it offers lengths starting at 25 feet, and ranging all the way up to 100 feet.

The way that this cable is able to deliver long distances is by being what’s called an “active” cable. That means that there’s a chip built into the cable that allows it to deliver signals over longer distances without degrading the signal.

The trade-off to that is that the cable is more expensive than others, starting at over $40. Now, that may be worth it for some situations, especially given the fact that you’re more likely to use this in corporate settings than just at home. But still, the added price isn’t great. Also, the cable isn’t quite as strong as some of the other options out there. 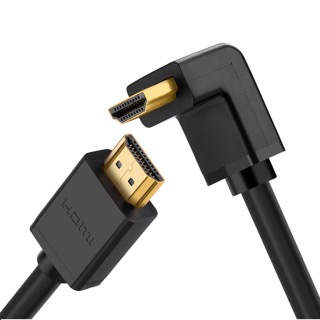 The cable has a number of advantages to it. Apart from the right-angle connector, it’s also relatively cheap, and it supports a 4K resolution at 60Hz and HDR.

The cable isn’t quite as durable as some other options though. The casing is plastic instead of a braided material, so over time, it might get damaged. But if you take care of it, the cable should last for years to come.

Are there better quality HDMI cables?

Yes. Some cables offer a stronger sleeve that ensures that they’re less prone to breaking. For some, getting really high-quality HDMI cables may not be worth it — especially for those who think they’ll just plug in the cable and leave it for a few years. But if you want to make sure your cable lasts as long as possible, it’s worth buying a better-quality one.

Do I need a special HDMI cable for 4K?

Are 8K HDMI cables worth it?

It really depends. 8K TVs still aren’t really all that common, not to mention the fact that not much content supports 8K. Most won’t need to get an Ultra High-Speed HDMI cable, but if you really want to future-proof your cables, then getting one that supports 8K may be worth it. Also, if you want 4K at 120Hz, then it’s also worth getting an Ultra High-Speed HDMI cable. For example, the PlayStation 5 and Xbox Series X support 4K at 120Hz.

What’s the difference between HDMI 2.0 and 2.1 cables?

Is there a difference between 4K and 8K HDMI cables?

More coverage: See our guide to the best charging cables!