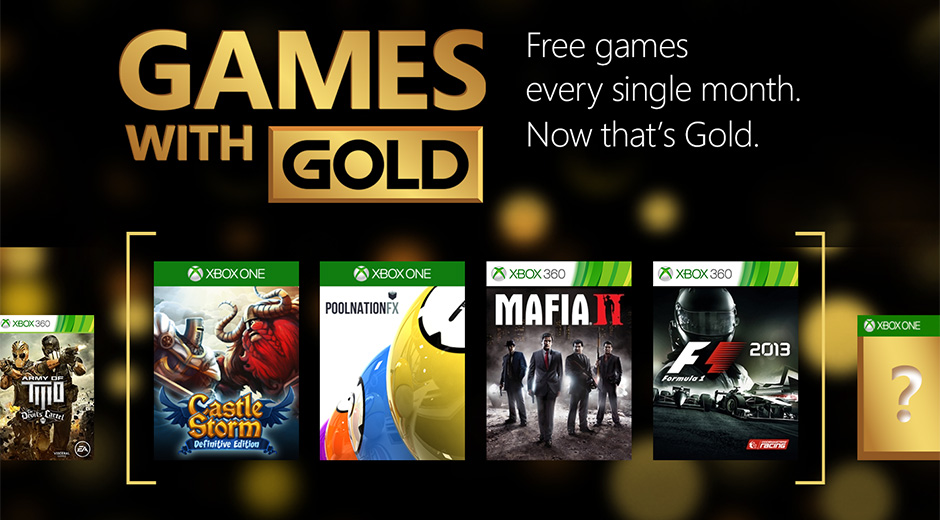 After doubling up on free games in April, Games with Gold is back to normal next month, with four games to download on Xbox One and Xbox 360. Unfortunately, one of the free Xbox One games is just an extension from last month’s collection, but we’re all going to be too busy playing The Witcher 3 to worry about it anyway.

DON’T MISS: Call of Duty: Black Ops 3 flings the series even further into the future

Here are the four games:

CastleStorm: Definitive Edition — Available all month on Xbox One

CastleStorm: Definitive Edition is a genre mash-up that combines medieval warfare with 2D physics-based destruction! Prepare to be challenged (in a good way) to manage a lot of battlefield elements at one time by controlling the battle in real-time, bombarding your enemy’s battlements with ballista-projected artillery, managing a fearsome ground attack, and casting powerful spells in epic conflict between Knights and Viking warriors!

Pool Nation – Available all month on Xbox One

Pool Nation is a slick new take on the billiards genre, offering photo-realistic graphics, an absolutely spot-on physics engine, 12 different rule sets including the exclusive Trickshot Editor and the unique rule set customization tool, for ultimate personalization; alongside all the learning aids and professional difficulty levels you could want to help polish your game.

Mafia II puts you in the shoes of Vito Scaletta, an Italian immigrant to America who finds himself wrapped up in an increasingly complex series of criminal plots in post-World War II America. As Vito, you’ll drive period cars all around Empire Bay, based on a pastiche of America’s biggest burgs, and blast your way through a variety of challenges, from bank robberies to ambushing rival gangs to sweet-talking your favorite molls.

F1 2013 features all the cars, drivers and circuits from the 2013 FIA Formula One World Championship plus all-new classic content from the 1980s. If getting behind the wheel of the most sophisticated automobiles on the planet is your thing, then F1 2013 has you covered.

There you have it: Games with Gold for the month of May. Remember, you still have a day or so left to download April’s games, so if you haven’t jumped on the Xbox Games Store yet, be sure to do so before Friday.